Bust of Dubček unveiled in Rome

A CITY square in Rome has a new addition: a bust of reformist communist leader Alexander Dubček that is within sight of the building housing the Italian Foreign Affairs Ministry. The Dubček bust was unveiled in a square now called Largo Bratislava – Capitale della Repubblica Slovacca – on January 20 in the presence of top-ranking Italian guests, many of whom knew Dubček personally. 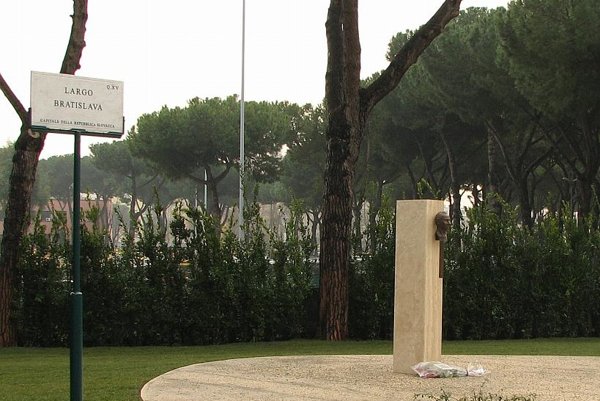 A CITY square in Rome has a new addition: a bust of reformist communist leader Alexander Dubček that is within sight of the building housing the Italian Foreign Affairs Ministry. The Dubček bust was unveiled in a square now called Largo Bratislava – Capitale della Repubblica Slovacca – on January 20 in the presence of top-ranking Italian guests, many of whom knew Dubček personally.

Dubček is a highly esteemed political figure in Italy. Before the Velvet Revolution, which started in November 1989, the University of Bologna had granted him an honorary doctoral degree for his work advocating human rights.

“It was Italy which lifted the taboo laying on Dubček and keeping him hidden, even non-existent and isolated in Bratislava, for almost 20 years,” Stanislav Vallo, the Slovak Ambassador to Italy, said in a speech at the ceremony explaining the close relationship between Dubček, Italy and Slovakia. “In November 1988, the University of Bologna granted Alexander Dubček an honorary doctoral degree and the Czechoslovak state representatives were forced to allow him to travel to Italy to receive the degree.”

Vallo further quoted a statement made by Dubček in a book by Luciano Antonetti to emphasise why placing his monument in Rome is so justified and how the degree from the Italian university helped Dubček to return to international political prominence. When answering a question by a French journalist about his journey from one capital, Bratislava, to the federal capital of Prague where he became speaker of federal parliament after 1989, Dubček said “the way from Bratislava to Prague was uncomfortable and, in particular, long from both the view of time as well as geography because I travelled first via Rome and Italy”.

“For us it was a great gesture and honour,” Tomáš Zálešák, an adviser to Deputy Speaker Hrušovský, told the TASR newswire after the ceremony.

He added that this is a success in Slovak diplomacy and means further development of contacts between Italy and Slovakia as well as Rome and Bratislava.

It was also during his travel to Rome and Bologna that the deep relationship between Dubček and Italian President Napolitano was born, Vallo added.

It was Napolitano who successfully pressured the Italian Communist Party to condemn the invasion, led by the Soviet Union, of Warsaw Pact troops into Czechoslovakia in August 1968, the ČTK newswire wrote.

The invasion swept away the leadership of the Czechoslovak Communist Party (KSČ) under Dubček. Dubček (1921 – 1992) was one of main leaders of the reformist wing of the KSČ and the principal organiser of the Prague Spring movement. After the reform process was suppressed, Dubček resigned from his top position in the party and was later ousted as a member.

Dubček returned to political life after the fall of the totalitarian regime, becoming the speaker of the new federal parliament. He died in November 1992 from injuries suffered in a car crash.