BELARUS, energy security and food prices were the leading topics of a summit of Visegrad Group (V4) prime ministers which took place in Bratislava on February 15 – exactly 20 years after the grouping was established in the northern Hungarian town of Visegrad. Slovakia currently holds the presidency of the organisation. German chancellor Angela Merkel was among other regional leaders who also attended the summit, and congratulated the four V4 members. 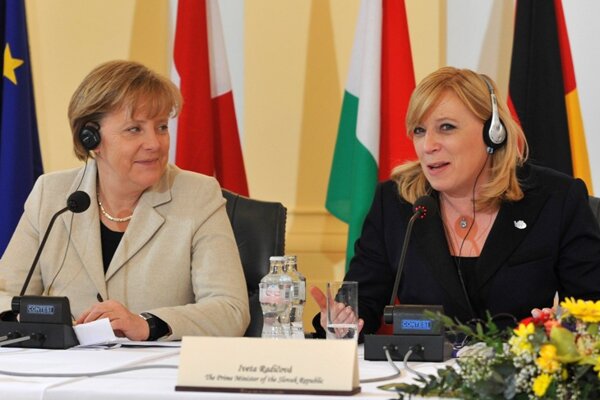 BELARUS, energy security and food prices were the leading topics of a summit of Visegrad Group (V4) prime ministers which took place in Bratislava on February 15 – exactly 20 years after the grouping was established in the northern Hungarian town of Visegrad. Slovakia currently holds the presidency of the organisation. German chancellor Angela Merkel was among other regional leaders who also attended the summit, and congratulated the four V4 members.

The Visegrad Group, now consisting of Poland, Hungary, the Czech Republic and Slovakia (the latter two joined the V4 as Czechoslovakia), has always engaged in issues of democracy and freedom, not only in member countries but also in the neighbourhood, Merkel said in her address to journalists after the summit, adding that human rights and individual freedoms have always been at the core of V4 cooperation.

“This grouping, which has become a part of Europe, reminds us that freedom is not something obvious that you can take for granted, but that it is something you need to fight for every day and defend,” Merkel said. She praised the V4 countries for pushing forward the agenda of the Eastern Partnership, an initiative which was created during the Czech presidency of the EU, and which remains a focus during the current Hungarian presidency and is expected do so in the subsequent Polish presidency.

Although the leaders were scheduled to discuss current topics on the European agenda in general, Radičová brought up a topic that was not originally listed for the summit, and asked the delegates to share their experience of measures to address the financial crisis.

According to Radičová, citizens are experiencing “frightening” increases in the prices of food and energy, and individual countries are not able to solve this problem on their own – she noted that even lowering VAT for food products had not helped to lower prices in Poland or Germany. The V4 prime ministers proposed that the European Council deal with these topics at its summit in March; they were backed by their Austrian and German partners.

The V4 is currently in a good position to push through its agenda within the EU since the union’s presidency is now occupied by Hungary, and Poland will take over next.

“We want to solve living topics, living problems,” Radičová said, commenting on the declaration that the V4 prime ministers signed.

Energy security was one of the topics the prime ministers mentioned as a priority, especially because of the region’s experience of breaks in gas supplied from Russia, most notably in January 2009.

Ukraine abstains from the call on Lukashenko

The most concrete outcome of the summit was a statement on the situation in Belarus, in which six of the prime ministers present at the summit expressed their serious concerns about the Belarusian authorities’ observation of human rights in the country.

“We will continue to closely follow the situation in Belarus and remain committed to our policy of critical engagement, including through dialogue and the Eastern Partnership, conditional on respect for the principles of democracy, the rule of law and human rights,” their statement read.

Referring to Alexander Lukashenko’s re-election as president of Belarus in December last year as “fraudulent”, the six prime ministers also called on the authorities in Belarus to immediately release all political prisoners and to rehabilitate them, and to stop political repression and harassment of the opposition, independent media and civil society. The presidential election was followed by a wave of repression and the imprisonment of hundreds of opposition supporters.

“We are interested in cooperation with these countries, and from this viewpoint I consider it important that we didn’t forget about one country that lies at the EU’s borders, and that is Belarus,” Czech Prime Minister Petr Nečas said. “The clear support of six prime minister of EU member states for the democratic opposition in Belarus and its fight for human rights is in my opinion an important signal.”

Ukraine’s Prime Minister Azarov did not join the declaration.

“We can tell Lukashenko everything we think in a face-to-face talk,” he told the Sme daily.

Ukraine has close ties with Belarus, and if it had signed the statement this would have represented a major success for Slovak diplomacy, Sme noted.