Coalition keeps its majority, for now

THE HATCHET has been buried for now and the centre-right ruling coalition will keep its fragile majority in parliament. The government’s stability was put in doubt after Freedom and Solidarity (SaS) party expelled Igor Matovič, the informal leader of the Ordinary People faction, from the SaS caucus for voting in line with the opposition Smer party on February 10. 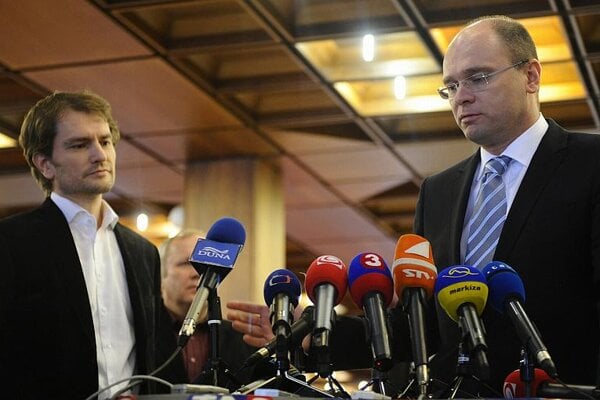 THE HATCHET has been buried for now and the centre-right ruling coalition will keep its fragile majority in parliament. The government’s stability was put in doubt after Freedom and Solidarity (SaS) party expelled Igor Matovič, the informal leader of the Ordinary People faction, from the SaS caucus for voting in line with the opposition Smer party on February 10.

However, on February 16 Jozef Viskupič, Erika Jurinová and Martin Fecko, the remaining three members of the four-member faction which made it into the parliament on SaS’ candidate list in 2010, announced that they would continue to support the ruling coalition as long as Matovič does not establish his own political party.

The Ordinary People thus sustained the ruling coalition’s narrow majority, giving it 77 out of 150 MPs in parliament. Matovič is the second MP to become independent, following the departure in January of Andrej Ďurkovský from the Christian Democratic Movement (KDH) caucus.

Prime Minister Iveta Radičová called the move by the three a “responsible decision” adding that their agreement creates room not only for political stability but also “general stability within society”, which according to her is crucial for society to recover from the economic downturn.

“It is not always possible to avoid political clashes, but these must not hinder real political decisions and solutions,” Radičová said, as quoted by the SITA newswire.

Ordinary People and SaS agreed that if Matovič establishes his own party, the three deputies will be allowed to leave without having to return their mandate to SaS. Matovič meanwhile suggested that his party might emerge some time next year. The next general election is not due until 2014.

After Matovič was expelled from the SaS deputy faction he declared that he was the victim and that the coalition had violated its agreements with him. However, on February 16, SaS chairman Richard Sulík said that the two of them had buried the hatchet and that their personal relationship was fine.

“What has been said was already said and I do not intend to return to that,” said Matovič, who had exchanged some strong words with Sulík after his expulsion.

Matovič, along with Radoslav Procházka, a KDH deputy, on February 10 supported a draft amendment to the State Citizenship Act proposed by the opposition Smer party. The ruling coalition had intended to partly reverse changes that the former government, led by Smer leader Robert Fico, had made to the law in response to a change in the law of neighbouring Hungary which made it easier for ethnic Hungarians to acquire Hungarian citizenship. Around 10 percent of Slovak citizens speak Hungarian as a first language.

The coalition proposal was subsequently dropped and the Smer proposal was also defeated, meaning the Fico-era law remains in force.

Béla Bugár, the leader of Most-Híd, the coalition party which has pushed hardest for reform of the law, responded to Matovič’s action and the failure of the coalition draft immediately, announcing that his party would not support any other coalition draft laws until the situation had been clarified. Matovič at first blamed Bugár for his expulsion from SaS but then claimed that he had in fact been deceived and led to believe that his vote for the Smer draft was covered by his agreement with Sulík.

Sulík said that the two of them had agreed that Matovič would vote for his own amendment to the coalition proposal drafted by Most-Híd and that when it was passed Bugár would withdraw the proposal to allow for further negotiations.

“There was no agreement over Matovič’s vote in favour of the Smer draft,” Sulík said, as quoted by the Sme daily.

Matovič said that he personally told Sulík that he would vote for the Smer draft, but that the other three members of the Ordinary People faction would refrain from voting, meaning that Fico’s party’s proposal would be defeated. Sulík, according to Matovič, said that he and the coalition accepted this solution, Sme reported.

The expulsion of Matovič from the SaS deputy faction did not come as a surprise to observers.

“The overall profile of Igor Matovič as an unpredictable politician and member of the deputy faction could no longer be tolerated and his expulsion was in some ways natural,” said Grigorij Mesežnikov, a political analyst and president of the Institute for Public Affairs (IVO) think tank. “The way Matovič spoke to the media and treated his own colleagues was very non-standard.”

In terms of the rules of his own deputy caucus as well as political parties in general he has several times displayed a lack of loyalty, Mesežnikov said.

“He did not respect internal party agreements,” Kusý told The Slovak Spectator. “While it is true that a deputy should be guided by his conscience, [Matovič] in fact accepted an obligation to respect certain agreements within the ruling coalition after he made it into parliament on the back of SaS. He has violated those agreements.”

Kusý said that Matovič’s promises are built on a very unstable foundation because if he continues to proceed in this way and prefers his subjective judgment over any agreement with the ruling coalition, then his promises can be broken at any time because he can simply say: ‘based on my conscience I cannot support the coalition'.

Matovič has expressed his opposition to the way political power in Slovakia is channelled through parties. In an interview for the Sme.sk website he suggested that on average each MP has at least 10 nominees in state firms and institutions, which buys MPs’ loyalty and glues the coalition together. After criticism from fellow coalition MPs he later amended his statement, but only to say that the average is more likely close to 20 nominees.

After his expulsion Matovič went further, saying that he was giving the ruling coalition until March to publish a list of their nominees to state positions and that if they failed he would go ahead and publish details of all the party nominations himself.