Results of polygraph are viewed as vindication

THE RESULTS of polygraph tests indicate that Milan Andrášik and Miloš Kocúr were not involved in the death of Ľudmila Cervanová, a young medical student who was killed in 1976 – a case that has generated controversy for more than three decades. The two men took the tests in Bratislava on February 16, stating that they had nothing to do with the crime and that their previous admissions had been coerced during the original police investigation in 1981. The results of polygraph tests, however, are not admissible as evidence in Slovak courts. 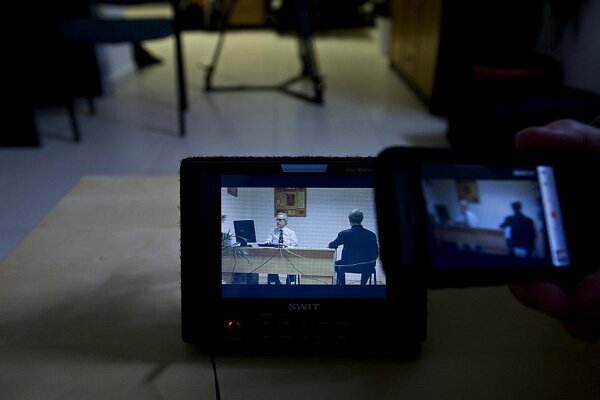 Milan Andrášik and Miloš Kocúr took polygraph tests on February 16. Each said they had nothing to do with the death of Ľudmila Cervanová in 1976. (Source: Andrej Bán, courtesy of.týždeň)
Font size:A-|A+0

THE RESULTS of polygraph tests indicate that Milan Andrášik and Miloš Kocúr were not involved in the death of Ľudmila Cervanová, a young medical student who was killed in 1976 – a case that has generated controversy for more than three decades. The two men took the tests in Bratislava on February 16, stating that they had nothing to do with the crime and that their previous admissions had been coerced during the original police investigation in 1981. The results of polygraph tests, however, are not admissible as evidence in Slovak courts.

“They passed with a result according to which if they claim they had nothing to do with the case, they were telling the truth,” said Andrej Bán, a reporter for the Týždeň weekly, which helped to arrange the polygraph tests for the two men this year and had arranged similar tests for four other men convicted of the crime in 2007.

On February 16, 2011 Robert E. Lee, a US expert on polygraphs (psychophysiological detection of deception – PDD), tested Andrášik and Kocúr and then sent the results for review by other examiners in the US who knew nothing about the questions that were administered during the test. These additional examiners confirmed Lee’s conclusions.

“If there was any participation in the murder of Ľudmila, it would have been proved,” Lee told a press conference held on February 18, as quoted by the SITA newswire.

He said the screening technique he used would have detected the two men’s participation in the murder and added that the results could not have been influenced by the long period of time which has passed since Cervanová’s death in 1976.

Ľudmila Cervanová disappeared from Bratislava’s Mlynská Dolina, a university dormitory area, in July 1976 and a body reported to be hers was later found in a brook near Kráľová pri Senci. Seven young men from Nitra – Juraj Lachman, František Čerman, Stanislav Dúbravický, Pavol Beďač, Roman Brázda, Miloš Kocúr and Milan Andrášik – were detained by the police in 1981.
The prosecution charged that they had kidnapped Cervanová from a Bratislava disco, raped her about 10 times and then murdered her.

All seven suspects were found guilty by the Bratislava Regional Court in 1982 and sentenced to between four and 24 years in prison. Originally the prosecution had requested death sentences for four of the accused despite their repeated claims of innocence.

In 1990, after the fall of the communist regime, the Supreme Court of Czechoslovakia overruled the original sentences and returned the case to the lower court while ordering the release of the men who were still in prison.

Critics who have followed this case for many years say that even after the fall of communism the courts ignored newly-revealed testimonies as well as a new expert medical report by forensic medicine expert Peter Fiala and again found the men guilty on the basis of the communist-era admissions which the men said they signed under severe psychological pressure – being given the choice between signing the admissions of guilt or being sentenced to death by hanging.

Even though Slovak courts do not recognise PDD results as admissible evidence, Kocúr and Andrášik stated that they view the results as a kind of vindication. The two men wanted to undertake polygraph tests four years ago in 2007, when four of the other individuals did so, but they were not given permission to leave prison to be tested.

Patrick T. Coffey, another US expert on PDD testing, learned about the convictions of the men in the Cervanová case and offered to administer the tests in 2007 to determine whether they were involved. Coffey reported that the four men he tested had told the truth when they stated they had nothing to do with the crime.

Bán, the Týždeň reporter, said the results of the February 16 polygraph tests indicate that Kocúr told the truth when he said he was not involved in the Cervanová case and that the result of Andrášik’s test was “inconclusive”. Andrášik recorded between 1 and 2 on a scale on which 3 is classified as “truth” and -3 is classified as “deception”. Lee’s stated conclusion was that neither of the two men was involved in the crime for which they were convicted.

“The case fell apart already when four of them passed the test,” Bán said in a video published by Týždeň. “The purpose here was to fulfil the wish of Mr Andrášik who repeatedly requested it [polygraph testing]. Nothing good could come out of it for him, as he was convicted in Slovakia, the case was closed and he has served his sentence, so he could only harm himself. But he asked for it and passed with this result.”

The prosecution of the seven men from Nitra has become one of the most well-known and controversial cases in the history of the Czechoslovak and Slovak judiciary.

The case was closed in 2006 when Slovakia’s Supreme Court confirmed the verdict that the regional court delivered in 2004.

Critics charge that the Slovak lower court ignored all the imperfections in the communist-era investigation and prosecution that had been noted by the Czechoslovak Supreme Court in 1990 and ordered even longer prison terms for three of the defendants, forcing two of them to return to prison to serve additional years.

Andrášik was the last of the sentenced men to be released from custody when he left Leopoldov prison on parole on October 14, 2009. His release, however, was not based on any progress in resolving the questions that had been raised about the legitimacy of his original conviction.

Andrášik’s lawyer, Allan Böhm, told journalists that he will present additional facts to prove the innocence of his client and suggested this will be done before the European Court of Human Rights in Strasbourg.