ONLINE technology is evolving at breakneck speed. This brings not only sophisticated new services, smarter ways of communication and more opportunities to share information, videos and photos with family and friends, but also potential online dangers and the need to defend against them. The owner of any computer now needs to have, and regularly update, anti-virus programs and behave in a responsible way when putting information, photos and videos on the web or communicating with his or her bank online. But although the potential dangers of the internet are quite well known, Slovak users do not always behave in a responsible way and do not take online security seriously enough, say experts. 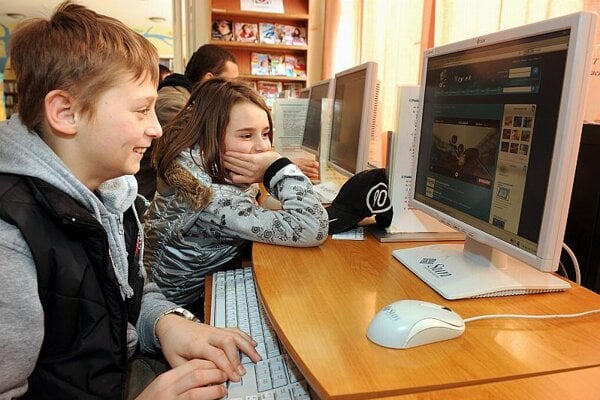 ONLINE technology is evolving at breakneck speed. This brings not only sophisticated new services, smarter ways of communication and more opportunities to share information, videos and photos with family and friends, but also potential online dangers and the need to defend against them. The owner of any computer now needs to have, and regularly update, anti-virus programs and behave in a responsible way when putting information, photos and videos on the web or communicating with his or her bank online. But although the potential dangers of the internet are quite well known, Slovak users do not always behave in a responsible way and do not take online security seriously enough, say experts.

The experts report that Slovaks underrate the security risks that internet use may pose for them. The level of safety precautions the average Slovak user applies is relatively low and the passwords they use are too simple and easy to crack.

“Analyses which we encounter show regularly that people in general are not careful enough when on the internet and that Slovakia is not an exception,” Roman Greguš, manager for internal and external communications at internet provider Slovanet, told The Slovak Spectator. “Slovaks as well as other Slavic nations are generally more trusting and underestimate the importance of a strong password. They often use passwords which can be guessed simply or which can be broken using a so-called dictionary attack.”

Paula Okaninová from Microsoft Slovakia agrees, saying that passwords are often created according to how easy they are to remember – rather than how secure they are.

Ivan Kvasnica from the online IT daily zive.sk pointed out to The Slovak Spectator that internet users worldwide are not very careful, something which has been demonstrated by checks by well-known IT security companies. At the end of 2010 hackers stole the passwords of some 200,000 users of some US portals, while the most common passwords were ‘123456’, ‘password’ and ‘12345678’. Slovakia has its own notorious example: a hacker discovered in 2006 that the National Security Office of the Slovak Republic (NBÚ SR), which is responsible for the vetting and security clearance of personnel appointed to sensitive positions, was using the password ‘nbusr123’ for its own system.

The experts regard social networks as representing a special security issue.

“I think that few people realise how much personal data they give away on social networks and how these details can be abused and misused,” said Okaninová.

Greguš agrees, adding that people often share sensitive information on social networks, for example when they are going on holiday. This may be ideal information for burglars, who can use it to find out when homes will be empty.

Moreover, according to Kvasnica, it is possible to find social network profiles with photos and texts which are left completely public by users even though Facebook, for example, provides relatively effective security tools to protect privacy.

Based on Microsoft Slovakia’s experiences, Slovaks are not very cautious, either.

“They are often surprised how information, photos or opinions which they publish online can be abused,” said Okaninová. “There still remains a feeling of anonymity, which is very deceptive.”

On the other hand, in Greguš’s opinion, Slovaks are also more conservative, which may act as a kind of protection.

Some experts regard as careless the behaviour of Slovak internet users when communicating with their banks online.

Kvasnica ascribes the generally low level of awareness of internet security to low education and a lack of promotion of the need for higher security among internet users.

“Internet users often treat the computer and the internet as tools for which they do not need to take care and follow some rules,” said Kvasnica. “They do not realise that they risk not only the loss of data, but during the current time of social networks and payment cards, also the loss of their money and identity.”

According to Kvasnica, Slovaks often lack even basic awareness about security risks on the internet. Normal internet users who do not work in the IT sector often neglect to install a firewall or anti-virus program, though thanks to education and promotion things are improving. The situation is worse when it comes to protection against phishing, updating software including the operating system, and using precautions against identity theft and abuse of data on social networks.

According to Kvasnica, there is a lack of integrated and mass education about security on the internet. He believes that in companies and state administration this should be the task of the administrators of local networks. Smaller companies in particular underestimate security but, as Kvasnica points out, the consequences of leaked or damaged sensitive data could result in liquidation. He said there are plenty of security tools available for the home internet user which are free and of reasonable quality.

Active attitude from the IT sector

Some Slovak internet providers and IT companies, recognising the low awareness about online security, have launched their own projects to help clients. One of them, internet provider Slovanet, has been running a survey among parents to assess their knowledge about how to protect their children from online dangers. After finding out that only some parents know what to do it has intensified its activities in this area.

Slovanet, in cooperation with the Association of Private Schools and School Facilities in Slovakia, has been conducting a survey among parents of school children aged up to 18 years. Its partial results, revealed on January 25, showed that many parents do not know how to protect their children from online dangers. More than 37 percent of parents admitted that they had caught their children watching improper content on the internet. Parents believe that various technical measures could help, but they often do not know how to obtain or use them.

Teachers say it is important that parents demonstrate an interest from a very early age in what websites their children are looking at and keep their children’s online behaviour in check.

“It is necessary not only to protect children from inappropriate content, but also to evaluate information they get from the internet in a critical way,” Saskia Repčíková, president of the Association of Private Schools and School Facilities in Slovakia, explained. “Here school can be very helpful.”

In response to the worrying survey results Slovanet has launched a service at www.bezpecnyinternet.sk, a free, advisory website with the aim to raise people’s interest in online security. Via the advisory service parents can pose internet security related questions to experts or ask how to improve their children’s online security.

“In general we assess bezpecnyinternet.sk very positively, because it is meeting its goal – to raise people’s interest in online security,” Greguš told The Slovak Spectator. “This is still insufficient and children, who do not realise the dangers of the internet, are often its victims. So far more than 5,000 parents have joined the survey and the online advisory service is also successful.”

Apart from parents Slovanet has also involved teachers, who can also significantly influence the behaviour of children using the internet.

Slovanet also offers a security product which filters websites that are inappropriate for children using criteria set by parents.

Microsoft, another company active in increasing online security in Slovakia, has responded with its project Child Online Safety (Bezpečne na internete). As part of it, Microsoft Slovakia operates the website www.bezpecnenainternete.sk, on which it publishes information, tips and instructions on how to cope with online threats and use the internet safely.

“The project Child Online Safety has met with a great response,” Okaninová told The Slovak Spectator. “It has raised interest not only among children, but also parents and especially teachers.”

Microsoft Slovakia began the project in 2008. As well as the website it also regularly organises events at which it attempts to draw more attention to online security. It organises roundtables as well as interactive workshops at which it addresses contemporary topics such as social networks, according to Okaninová.

Microsoft Slovakia wants to continue its interactive project this year as well.

“There are a number of online dangers with which it is necessary to be acquainted,” said Okaninová. “Since the internet is constantly developing, it is very likely that we can expect a new phenomenon which will require us to be prepared and armed with information.”