AFTER THE great success of last year’s exhibition Galandovci, Legends of Slovak Modern Art, the Bratislava City Gallery has organised a follow-up exhibition of the works of this loose grouping of artists covering the years from 1969 to 1989. It will remain open until April 3. Visitors to the gallery’s Mirbachov Palace in Františkánske Square can follow the avant-garde group’s artistic struggles after they were prohibited from exhibiting and promoting their work by the Communist regime. 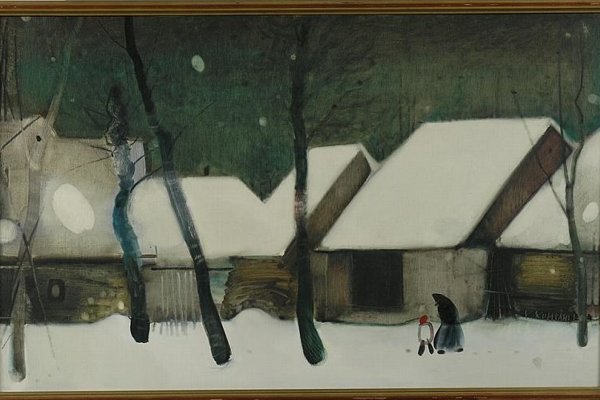 AFTER THE great success of last year’s exhibition Galandovci, Legends of Slovak Modern Art, the Bratislava City Gallery has organised a follow-up exhibition of the works of this loose grouping of artists covering the years from 1969 to 1989. It will remain open until April 3. Visitors to the gallery’s Mirbachov Palace in Františkánske Square can follow the avant-garde group’s artistic struggles after they were prohibited from exhibiting and promoting their work by the Communist regime.

The first period of their work from 1957 to 1968 was featured in the 2010 exhibition and examined the artists’ works based on the common principles in their Manifesto as well as their shared values and artistic perceptions, Zsófia Kiss-Szemán, curator at the gallery, told The Slovak Spectator. From their first joint exhibition in Žilina in 1957 to their last in Berlin in 1968, the group – named after the already deceased painter Mikuláš Galanda – worked and exhibited together, mutually influencing and creating a coherent artistic vision. Kiss-Szemán said they can be considered the Slovak neo-avant-garde even though this term is usually perceived more in a global or central European context. The group consisted of Andrej Barčík, Anton Čutek, Vladimír Kompánek, Rudolf Krivoš, Milan Laluha, Milan Paštéka, Andrej Rudavský, Ivan Štubňa and Pavol Tóth; while Čutek and Štubňa later distanced from the group and performed and created more individually. Thus, their works are not represented in the current exhibition.

Kiss-Szemán said the current exhibition should not be viewed as a sequel but rather as a continuation of the group’s activities after they were banned - for some time, perceived as the toughest "normalisation" period - from exhibiting and working together as a group, forcing them to create individually and to go in somewhat different directions. Kiss-Szemán said 1989 was chosen as the ending milestone because of space limits within the gallery and also because soon after 1989 some members of the group died while others reduced their creative activities. Kiss-Szemán and her co-curator Jan Kukal thought this would be the best way to present an accurate proportion of each artist’s works, believing it would not be fair to give less space to members of the group who had died earlier. Moreover, the curators said the group’s work did not change substantially after 1989 so the current exhibition provides a comprehensive overview of their artworks and their meaning for 20th-century Slovak art.

The exhibition opened on February 11, 2011, but Kompánek, a leading member of the group, died on January 20. The exhibit’s concept and final form could not be changed but invitations to the exhibition’s opening and the catalogue were updated to include information about the artist’s death. The exhibition has now become a tribute to the artist.

The Galandovci, although they came together in the second half of the 1950s, looked to history in the sense that they took Galanda as their symbolic model even though he had died in 1938, and also concentrated deliberately and explicitly on Slovak and Slavonic national, rural and traditional motifs.

Nevertheless, the Galandovci were progressive and innovative in their artistic perceptions and techniques, Kiss-Szemán said, adding that as many of the artists lived and worked until the end of the 20th century, and some remain active even now, it can rightly be said that their work spanned nearly an entire century.

The curator stressed that what makes the current show so valuable and unique is the fact that the exhibited works have been laboriously gathered primarily (70 percent) from private collectors so it is unlikely that an exhibition like it will occur in a similar form in the future. The exhibition will not travel from Bratislava as it was prepared specifically for the space in the Bratislava City Gallery.

The Bratislava City Gallery was separated from its previous association with the National Homeland Office, which oversaw four historical and cultural centres (the city museum, the regional library, the conservation centre as well as the city gallery), on January 1, 1961. It moved to its current location, the Mirbach Palace, named after its last owner, in 1975. It is thought a wooden house stood on the site of the palace as early as 1459, but the building acquired its current form between 1768 and 1770, when brewer Michael Spech commissioned the present rococo structure. After World War II, the palace became state-owned and subsequently housed the city gallery. Bratislava City Gallery has another venue, the Pálffy Palace, whose origins date back to the 1st century AD. The building’s last private owner was Count János Pálffy, an art lover and patron. The building later passed into public ownership and was most recently reconstructed in 1987 to exhibit artworks from the Bratislava City Gallery’s collections. Both buildings offer a dignified environment to display historical and modern works of art.

This year marks the gallery’s 50th anniversary and a series of special events will commemorate the golden jubilee, such as the exhibition “50 Masterpiece Prints from the Collection of the Bratislava City Gallery”; Viktor Tilgner’s Bust of Josef Pollak, a donation from Nathaniel and Megan Udell from the USA that will open in March; and a display of artworks from the gallery’s web-art project (www.webumenia.sk) coming up in June.

In July the gallery will publish a special book marking its 50th anniversary describing its history and current initiatives. September will bring an exhibition entitled the “50th Anniversary of the City Gallery Bratislava” offering its famous and less-famous works in the Pálffy Palace, followed by a symposium marking the anniversary in October. In November a postage stamp featuring Christoph Murer’s Portrait of Ján Sambuco from 1587 will be released.

The gallery’s other current exhibitions include Classic Modern Art from France. Kiss-Szemán noted that foreign cultural institutes and embassies are a huge help to the gallery in arranging and exchanging works of art. The gallery's permanent exhibits represent a general survey of Slovak art over the course of centuries. Though some exhibitions have labels as well as informative publications in English, this is not uniformly the case. More information can be found at www.gmb.sk, which includes English text.