THE FRUSTRATIONS of doctors and nurses over their pay and status is one of the problems that the Czech and Slovak Republics still share after almost two decades since the breakup of the old Czechoslovak federation. 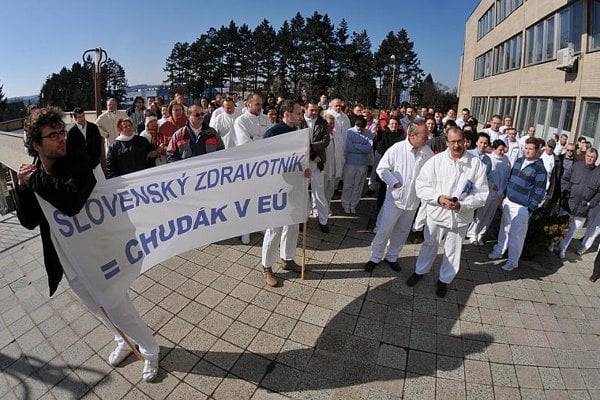 THE FRUSTRATIONS of doctors and nurses over their pay and status is one of the problems that the Czech and Slovak Republics still share after almost two decades since the breakup of the old Czechoslovak federation.

A recent, widespread campaign in the Czech Republic for higher pay for doctors, as well as the prospect of Austria and Germany fully opening up their labour markets, has intensified the debate over the state of the Slovak health-care sector. While Slovakia's Health Ministry says it does not expect any mass exodus of Slovak physicians to these countries, Health Minister Ivan Uhliarik in early March proposed boosting salaries. However, Finance Minister Ivan Mikloš immediately responded that he does not see any room to pour extra money into the health-care sector until structural changes are made. The Slovak Physicians’ Union of Specialists organised a protest on March 9, calling on health-sector workers to suspend provision of care for one hour and perform administrative tasks instead.

In response to the protest, Uhliarik said that he rejects the endangering of patients’ health even though he sympathises with the health-care workers’ case. The minister said that his department is involved in intense dialogue and wants to reach agreement on several issues.

“I am not sad, but rather energised so that we improve the health-care sector, lifting it to the European level,” said Uhliarik, a nominee of the Christian Democratic Movement (KDH). He added that while he wants better pay and conditions, the current situation of the sector must be taken into consideration.

Uhliarik restated that he honours the work of nurses and physicians, according to the SITA newswire.

“Twenty-one years after the revolution, we Slovak physicians must conclude that despite all our expectations, despite the immense effort we have made to improve the status of the physicians’ community, [we are in a] situation where the profession of physician in the Slovak Republic is endangered to the point that the only option remains departure to seek work abroad,” reads a letter written by Andrej Janco, president of the Slovak Physicians’ Union of Specialists from February 17.

The ministry says it has been taking action to improve the situation. By the end of the year the ministry plans to carry out a transformation of hospitals aimed at reforming the management of individual health-care institutions, ministry spokeswoman Katarína Zollerová said.

“We believe that in this way the ministry will be able to free more funds to cover the wages of physicians and health-care workers,” Zollerová told The Slovak Spectator.

The ministry is also planning for the possibility of extra health insurance, which would open the door for private investment in the health sector.

As for Mikloš’s statement about lack of money, Zollerová said that the ministry completely agrees with the minister’s point that the system needs to be retuned, since its new management last year inherited a sector with a deficit exceeding €200 million.

The ministry believes that the transformation of hospitals into joint-stock companies will boost the effectiveness of their management while increasing the accountability of managers.

“The health department, however, cannot agree with the assumption that health care in Slovakia does not need money,” Zollerová said, adding that Slovakia is currently spending approximately 5.3 percent of its GDP on the health sector, while countries such as Austria and Germany, whose GDP is much higher than that of Slovakia, spend 7 to 8 percent.

Anton Szalay of the Trade Union of Medical and Social Services Employees, which supported the organisers of the March 9 protest but did not encourage its members to join in, said that if new funds are not found, the indebtedness of health-care institutions will deepen further.

“Our effort was to achieve higher payments from the state for insurance policy holders from the current 4.32 percent to 5 percent, and also more revenues flowing to the department,” Szalay told The Slovak Spectator.

He said that the demands of trade unions have been rejected by health sector employers on the grounds that they are receiving less money from health insurers than in 2010.

In response to the statement by the Ministry of Finance, Szalay asked why, if the government was previously willing to consolidate the banking sector by pouring millions of Slovak crowns into it, the state is not able to change its approach in the case of the health-care sector.

“Can the transformation of teaching hospitals to joint-stock companies be considered a systemic change at the current level of financing?” Szalay asked, suggesting that no one has answered some of the serious questions posed. “Has the ministry allocated money for this step? How many institutions will be transformed? How much will the clearing of hospitals’ debts cost?”

Szalay said that he doubts the state will release more money for the salaries of doctors and health-care workers. He said that the Finance Ministry and the government are wrong to present the transformation of teaching hospitals into joint-stock companies as an act to save the health-care sector.

In response to the opening of the Austrian and German labour markets, and the continuing disruption in the Czech health sector, the Ministry of Health prepared an analysis of the current state of the health sector in Slovakia. The analysis recommended seeking ways to increase payments from health insurers for health care to make it possible to boost the remuneration of health-care employees, SITA reported on February 28.

Yet, the Health Ministry noted that the restrictions that Austria and Germany have applied for a seven-year transition period to the free movement of labour from so-called new EU members, including Slovakia, only affected a limited number of activities and professions.

Since Slovakia joined the European Union, Austria and Germany have become destinations for hundreds of Slovak health-care workers across a whole range of professions.

“Undoubtedly, the basic motivation for this mobility is the possibility of earning several times higher wages, with which Slovakia cannot currently compete,” said Zollerová.

According to her, however, by opening the labour market in Austria and Germany no enormous outflow either of insurance policyholders or health-care workers is expected, since many Slovak citizens already work in these countries now.

“We think that by opening the market, some of the professions will be legalised,” she concluded.