Light at the end of the tunnel

WHILE the general outlook for Slovakia’s economy is optimistic for 2011, with expectations of real growth in many sectors as well as in gross domestic product, the country’s construction industry remains in the doldrums. Construction firms believe that output will continue to decline this year due to low demand but are hopeful that the negative numbers will not be as bad as in 2009 and 2010. They expect a turnaround in demand to finally arrive in 2012 and for construction output to increase in that year. A recent survey of construction companies in Slovakia reported that the prospects for the sector may be starting to look up. 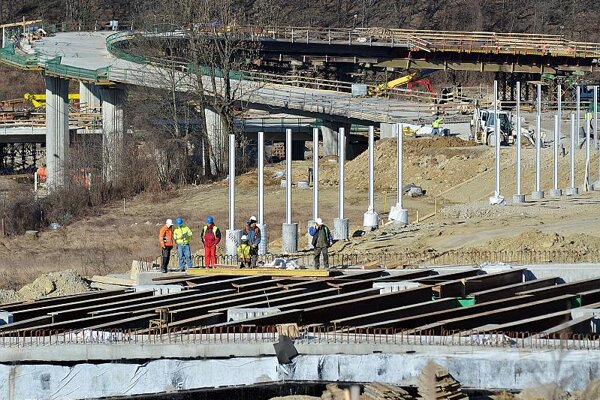 The construction sector is expected to shrink in 2011. (Source: SITA)
Font size:A-|A+0

WHILE the general outlook for Slovakia’s economy is optimistic for 2011, with expectations of real growth in many sectors as well as in gross domestic product, the country’s construction industry remains in the doldrums. Construction firms believe that output will continue to decline this year due to low demand but are hopeful that the negative numbers will not be as bad as in 2009 and 2010. They expect a turnaround in demand to finally arrive in 2012 and for construction output to increase in that year. A recent survey of construction companies in Slovakia reported that the prospects for the sector may be starting to look up.

“The findings from interviews which CEEC Research carried out with directors of Slovak construction companies indicate a stabilising of the Slovak construction sector,” Jiří Vacek, director of CEEC Research, told The Slovak Spectator. “This year the sector should contract by only 1.4 percent and next year most of the directors expect the first post-crisis growth in the sector [an average of 5.6 percent].”

Vacek thinks this indicates that the Slovak construction sector finally will see light at the end of what has been a very long and quite dark tunnel they have been travelling through in 2009 and 2010. Vacek added that not all companies survived this serious contraction in business and the weak market forced all construction companies in the sector to make their operations more efficient and cost-conscious.

Zsolt Lukáč, the head of the Association of Construction Entrepreneurs of Slovakia, believes that Slovak construction companies are facing another difficult year and many will continue fighting for survival.

“2010 was very critical for builders,” Lukáč told the SITA newswire in mid February. “2011 will be even more demanding. Impacts from the crisis were reflected in this sector later [than in other sectors]; there are a minimum of construction orders and thus the ability of the sector to remain afloat will be at a very low level.”

Lukáč added that the construction boom in Slovakia that lasted until mid 2008 was neither natural nor healthy and that the subsequent crisis had hit small and medium-sized companies especially hard, while the situation for larger companies is tenable for now. Lukáč also said that the government’s halt of large-scale highway construction may have a huge impact on the construction sector, explaining that the industry’s confidence in the timely re-launch of large highway projects is extremely low and lengthy continuation of this period of uncertainty is unbearable for most companies. He expects that a number of construction companies will be forced to leave the market this year as they did last year.

The regular quarterly analysis of Slovakia’s construction sector which CEEC Research conducts in cooperation with KPMG Slovensko and Ipsos Tambor was released on March 10. It is based on a survey of executives of 100 construction companies that took place in early November 2010.

Vacek said the main factor that will affect the pace of a return to growth will be the level of demand from the private sector as well as from projects financed from public funds, but he added that construction firms’ better efficiency, translating into reduced construction costs, could stimulate a faster return in demand and play a role in recovery in sector output.

“The dust has been shaken off [the plans] of some older projects and the first brand new projects have started but the sector is still waiting for some more significant impulses for its growth,” Vacek said.

Growth in demand has not emerged, while construction firms have faced some opposite impulses over the past year. After the Iveta Radičová government took the reins of power last July it cancelled two big public-private partnership (PPP) projects for highway construction because they were considered to be overpriced. The financing of highway projects has not been resolved by the government to date and this has stymied the plans of many companies which had hoped that public projects would use some of their excess capacity caused by the decline in private sector projects.

“For the time being Metrostav SK is limited by insufficient demand for construction production and increasing pressures from competitors but also from lack of payment discipline by clients and of course unresolved financial matters from previous years,” said Miroslav Lapuník of Metrostav SK, one of the biggest construction companies in Slovakia, when responding to the survey, adding that in the public sector the visible drop-off in large civil engineering projects combined with the small number of announced tenders has stiffened competition. He also added that “the significant number of cancelled public tenders certainly does not affect growth in [construction] demand in a positive way.”

In comparing Slovakia with neighbouring countries Vacek said that the Polish construction sector went through the global economic crisis without suffering a decline in output and that construction firms in Poland are predicting 3.2-percent growth in the sector in 2011. The construction sector in the Czech Republic only shrank significantly in 2010 (by 7.8 percent) as several large long-term projects kept it afloat in 2008 and 2009. Directors of Czech construction companies said they expect construction output to continue to fall in 2011, with the latest estimate being a drop of 5.5 percent and even though they think stabilisation may arrive in 2012, none of the companies predicted significant growth. Vacek stated that the situation in Hungary is somewhat different because the construction sector there has been shrinking continuously since 2006, adding that directors of Hungarian construction companies expect possible stabilisation in 2011 but no return to growth until at least 2012.

Slovak construction companies generated output of €5.535 billion in 2010 according to Slovakia’s Statistics Office: this represented a decline of 4.6 percent from 2009. However, construction output dropped by 11.3 percent in 2009 so last year was at least relatively better. In 2008 the Slovak construction sector registered output growth of 12.1 percent compared to 2007.


Construction work undertaken within the territory of Slovakia accounted for €5.388 billion in 2010, or nearly all of the sector’s total output, contracting by 3.3 percent from the previous year. Construction output by Slovak firms working abroad came to only €146.1 million, a decline of 34.8 percent from 2009.