MARCH 9 witnessed a rare event in Slovakia: large excavators demolished a small illegal construction in Malacky. It was one of very few cases in which a building erected illegally in Slovakia has been pulled down following a legal process. The obsolete legislation which deals with illegal construction dates back to the last century and gives only limited powers of defence to those affected. However, a wave of protests from the general public has recently led to a petition calling for establishment of a so-called construction police and the current government, led by Iveta Radičová, has taken up the issue as one which it wants to address during its term in office. 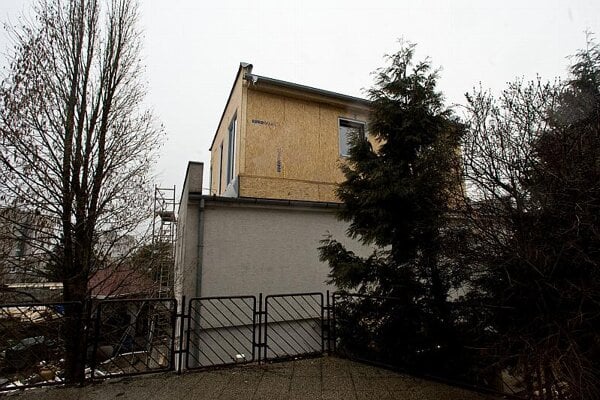 MARCH 9 witnessed a rare event in Slovakia: large excavators demolished a small illegal construction in Malacky. It was one of very few cases in which a building erected illegally in Slovakia has been pulled down following a legal process. The obsolete legislation which deals with illegal construction dates back to the last century and gives only limited powers of defence to those affected. However, a wave of protests from the general public has recently led to a petition calling for establishment of a so-called construction police and the current government, led by Iveta Radičová, has taken up the issue as one which it wants to address during its term in office.

“In the construction law we want to refine definitions and tighten recourses so that fines are obligatory, not just possible as is now the case, and to set minimum and maximum fines,” Ján Figeľ, the Minister of Transport, Construction and Regional Development said, as quoted by the SITA newswire after the ruling coalition agreed to submit amendments to the Criminal Code and the Construction Act in early March. “This would ensure that penalties affect not only the builders responsible for the investment, but also those who participate in building an illegal construction, for example the construction supervisor and construction manager.”

It is the government’s response to the mushrooming number of illegal buildings which have appeared, especially in large cities, after investors ignored the construction law and launched construction without the necessary permits, or changed projects without getting approval from construction offices. This is because fines for ‘construction crimes in Slovakia are very low and the conditions for getting an illegal construction retrospectively authorised are very lax. Moreover, even though an investor can be ordered to pull down an illegal structure, the state and other participants in such cases have very limited powers to force it to actually comply.

The government wants to address illegal construction in two stages. First it plans to prepare a so-called small revision to the construction law and later a completely new construction law. This is because adoption of a brand new law will be complicated and require more than one year, the Trend weekly wrote. The second step will also have to address the sensitive problem of demolition of existing illegal structures.

According to the existing construction law, which came into force in 1976, construction offices can only impose a fine of up to €33,000. In the case of construction on protected land or on land not zoned for construction – for example, arable or forest land – the fine may be up to €166,000, Trend wrote.

The building demolished in Malacky was an unfinished house which was erected without proper permits on land owned by a neighbour, who had also not given the permission. TV Markíza reported that the demolition cost €1,500 and that the municipal council would seek to get the money back from the builders, who were described as socially inadaptable people – a Slovak euphemism normally used to mean Roma. There are two other illegal shacks on the site, but Malacky Mayor Jozef Ondrejka said he doubts whether the municipality could demolish them even if all the necessary rulings are obtained, as children already live there.

Many other citizens, institutions and municipalities across Slovakia face similar frustrations when fighting against illegal construction, for which large developers as well as private citizens, including Roma, are responsible. It has led to a petition calling on the government to change the relevant legislation.

Activists calling for the establishment of a construction police launched a petition in early 2010. It seeks the preparation of a revision to the construction law and related legislation in order to increase the effectiveness of legal tools to combat construction criminality. As Oliver Kríž, a deputy on the municipal council of Bratislava’s Petržalka district and one of the initiators of the petition, explained to The Slovak Spectator, they regard the construction police not as a new institution but as anchoring a set of measures which would assist the fight against illegal construction.

“Our petition action met with a very positive response from citizens,” Kríž told The Slovak Spectator. “The high number of signatures, which we also received by post is proof of this. We also welcome reports in the media that the current government has resolved to deal with this matter.”

“These are the signatures of people who [are using this petition to] call on the ministry to amend the construction law and take more decisive proceedings against illegal constructions,” said Kríž.

At the ministry they were met by State Secretary Árpád Érsek, who confirmed that the current construction law does not meet modern requirements and that the ministry is working on a revision. He promised to incorporate into the revision the proposals listed in the petition.

“In general the construction law in Slovakia is toothless and full of holes,” said Kríž. “Also, compared with other European countries it is too benevolent in the area of sanctions, and possibilities to address construction criminality are very limited. We have witnessed flagrant violations, for example in the case of the construction project at Betliarska street in Petržalka, which was later legalised; during construction of a hotel for the ice hockey championship by the Váhostav company; but also in such curious cases as that of Mr Talapka, who illegally built on the plot of the ŽSR railway company.”

The latter case is the latest involving illegal construction in Slovakia to receive intensive coverage from the Slovak tabloid press. Cyril Talapka reportedly built a large lakeside villa without the necessary permission near the village of Reca, in Senec district, partly on a state-owned plot used by the ŽSR railway company. The case is currently deadlocked as ŽSR is demanding that Talapka return the plot in its original condition, i.e. with the structure removed.

The activists are demanding higher fines and the introduction of new sanctions for violation of the construction law, such as a ban on commercial activities or the confiscation of construction machinery, effective new measures to halt illegal construction work, and extension of police powers to uncover and punish violators. They propose defining a new criminal offence, that of illegal building, changing or removing a construction. They also propose tightening conditions for ex post facto legalisation of construction and a change in the conditions which must be met for illegal structures to be removed.

The initiators of the petition also addressed the main organisations that represent municipalities in Slovakia: the Association of Slovak Towns and Villages (ZMOS) and the Union of Towns of Slovakia (ÚMS).

“Even though they welcome our initiative, they did not join it officially,” said Kríž, explaining that because 2010 was an election year for municipalities they were afraid that this sensitive subject would become politicised. “But it was conformed to us that Bratislava Mayor Milan Ftáčnik supports a change in the construction law.”

Conservationists have long called for better enforcement of existing legislation and for the issue of illegal construction and violations of related legislation to be addressed, as they say they have witnessed damage to historical monuments by unauthorised construction – and even their complete demolition.

As Denis Haberland from the Monuments Board of the Slovak Republic told The Slovak Spectator, even though Slovakia has a monuments protection law dating from 2001, which limits the performance of ownership rights in the case of historical monuments, in reality it has not been respected and thus protection of cultural heritage has remained only at the verbal level and has not really been enacted.

The historical centres of towns and cities make up the biggest areas protected by the Monuments Board of the Slovak Republic.

“These are the most attractive and, within the real estate market, also the most suitable plots and buildings, where pressure for their demolition, extension and rebuilding is high,” Haberland said. “This is simply business which does not take into consideration the historical and cultural value of the buildings but purses their maximum exploitation, profit and thus the temptation to avoid the construction or monuments protection laws is very high.”

Haberland welcomes current moves to intensify the fight against illegal construction but remains sceptical, pointing to low enforcement of the existing legislation and the low interest among the general public in protection of historical monuments.

“The damage is extensive, but actually incalculable – so nobody is interested,” said Haberland. “The picture of Slovakia abroad is negative and I dare say that this is in part because of its lax attitude to monuments.”