Interpreters of notes and visions

THE SLOVAK Chamber Orchestra (Slovenský komorný orchester or SKO) is a string orchestra associated with the Slovak Philharmonic that is celebrating its 50th anniversary. The orchestra, known informally as the Warchalovci, bears the name of Bohdan Warchal, its founder and the leader of the ensemble for its first 40 years. The Slovak Spectator spoke to Ewald Danel, who has led the Slovak Chamber Orchestra for the past ten years, about the orchestra’s history, passions and future directions. 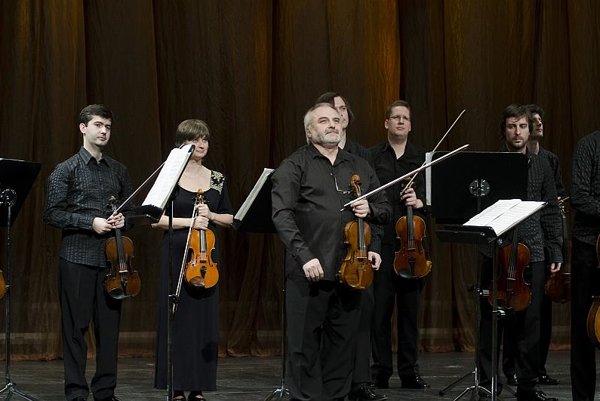 THE SLOVAK Chamber Orchestra (Slovenský komorný orchester or SKO) is a string orchestra associated with the Slovak Philharmonic that is celebrating its 50th anniversary. The orchestra, known informally as the Warchalovci, bears the name of Bohdan Warchal, its founder and the leader of the ensemble for its first 40 years. The Slovak Spectator spoke to Ewald Danel, who has led the Slovak Chamber Orchestra for the past ten years, about the orchestra’s history, passions and future directions.

The Slovak Spectator (TSS): How have you been celebrating the 50th anniversary?

We are holding a series of concerts that started during the Bratislava Music Festival last autumn. The SKO was really established in autumn 1960 but it gave its first concert on February 22, 1961. And to make things even more confusing the very first really official – and officially promoted – concert that was open to the public was on April 11, 1961. So we have a host of dates to celebrate and commemorate. In the concert at the music festival we played works by Josef Suk and in the February concert we played Antonín Dvořák. Serenades by Suk and Dvořák were part of the programme 50 years ago and they are in a way typical for the SKO and they form a sort of bridge between then and now.

TSS: What else did you perform at your commemorative concert?

I’ll begin with the second part of the February concert, where we played Corelli’s Concerto Grosso and the new Simple Symphony by Benjamin Britten, symbolically offering a variety of music from Baroque to current classical works. These two works were also part of the original concert and they were performed in the second part of the recent concert when the orchestra was joined by some of the old, original members. There was even one member who played with Warchal 50 years ago. In the first part of the February event a work by Roman Berger was performed – it premiered for this combination of instruments, as it was originally composed for a quartet. It is called Pesničky zo Zaoľžia, Songs from Zaoľžie. Zaoľžie is the region in Silesia where Bohdan Warchal came from and where Slovak composer Roman Berger comes from – and, what a coincidence, where I am also from. This work stems from the folk music of this region that connects all three of us. By the way, Berger dedicated this work, rather atypical for him, to me. But this is just one side of the composition; the other one is that the SKO has often played and premiered the works of Slovak composers, maybe more than other musical bodies. In the 10 years I have led the orchestra since Warchal’s death, we have premiered more than 40 works by Slovak composers. The SKO even inspired the writing of some of the compositions; Musica Slovaca by Ilja Zeljenka is a good example.

We have been invited to tour Japan to mark the 50th anniversary of the orchestra. Although they have a different musical background, Japanese audiences have grown to be connoisseurs and lovers of classical European music as many Japanese have studied music in Europe. Japan has great music halls and also great audiences – some patrons follow the musical scores during our concert.

We have also issued a special CD with the Suk and Dvořák serenades to mark our jubilee.

TSS: What do you plan for the near future?

On March 20 we will perform a spring concert in the Reformed Evangelical Church at Cukrová 4 that combines three symbols and we will play Vivaldi, Schubert, Bach, Gunoud's Ave Maria and Dvořák. It will take place one day before the spring equinox on March 21 when Johann Sebastian Bach was born and whose Prelude in C Major is the basis for the most famous Ave Maria by Gounod. It is usually perceived that Annunciation Day on March 25 was nine months before the birth of Jesus Christ but if we take the real time of human pregnancy – which is ten Lunar months – it would mark the day on March 20.

On Palm Sunday we will play Haydn’s The Last Seven Words. We restored this old tradition. It used to be a nice ritual in the past – a concert in Bratislava Cathedral – and we returned to it several years ago in our previous building, the Reduta. We recently moved the Palm Sunday concert to St Martin’s Cathedral where it used to be performed long ago. And on April 30 and May 1 we will play Messiah. These are special concerts that are in addition to our regular concerts in the Dvorana music hall.

To be unbiased and objective, some impartial person from the outside would have to evaluate the whole history of the orchestra. Of course, it is different now – but it also changed during Warchal’s times. Warchal said that he didn’t expect me – or anyone else – to preserve the SKO in the same form and in the same way as during his time. With creative work, even if the same person does the same thing twice it is never exactly the same as the setting changes and the audience changes and this influences the actual performance. I think we have preserved the core of Warchal’s direction and ideas although we have innovated slightly and we now cooperate with choirs, even semi-professional ones, and this was not the case during his time. We also play some works that he did not, like Mendelssohn’s string symphonies and Bach’s Brandenburg Concerts.

I would say we still combine absolute professionalism, especially in technique, with sheer amateurism – in the sense of the Latin origin of the word, to love, with the enthusiasm that made this orchestra come into existence. The Slovak Chamber Orchestra, unlike some other large musical bodies supported by the state, was created not by law or an official order from the authorities but from love for music and the vision of Bohdan Warchal and people around him. To be able to move and enthral people, an orchestra must have both qualities.

And today, although still successful, we have to look for ways to attract new audiences and perhaps bring more young people to our concerts. We want to show that our music is there for everybody – that musicians, even those playing classical music, are not gods or some special creatures but rather interpreters of composers’ ideas. Literally, they just interpret the black notes from a white sheet – but this also includes a composer’s visions – into something that people can understand. After all, musical works have been made for people. And fortunately we have feedback from people confirming that our efforts bear fruit.