Slovakia’s labour market remains sluggish nearly two years after the global economic downturn hit the country hard. Even though the country’s industrial production and GDP are now showing signs of recovery, labour market experts predict that it will take much longer for employment to recover and for the country’s high unemployment rate to return to its pre-crisis level. Slovakia’s unemployment rate remains in the higher tier among European Union countries and its level of long-term unemployment is becoming a social ill demanding better solutions. 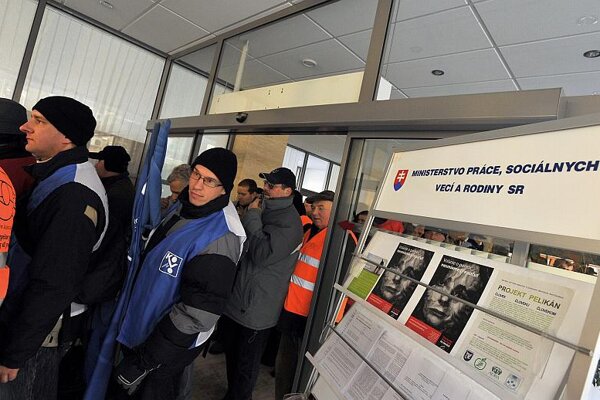 Slovakia’s labour market remains sluggish nearly two years after the global economic downturn hit the country hard. Even though the country’s industrial production and GDP are now showing signs of recovery, labour market experts predict that it will take much longer for employment to recover and for the country’s high unemployment rate to return to its pre-crisis level. Slovakia’s unemployment rate remains in the higher tier among European Union countries and its level of long-term unemployment is becoming a social ill demanding better solutions.

“The situation in the labour market has gradually stabilised after the crisis period,” Michal Páleník of the Employment Institute, a think tank, told The Slovak Spectator. “Unemployment has increased only very little recently or has been flat. Overall employment has not been increasing significantly but on the other hand it is no longer decreasing. The question is whether this is only a consequence of seasonal influences or a longer-term trend. The figures for the first several months of 2011 will show us.”

The latest available statistics from December 2010 indicate that the number of registered unemployed tracked by Slovakia’s Centre of Labour, Social Affairs and Family (ÚPSVAR) increased but Dávid Dereník, an analyst with UniCredit Bank, said this was due to normal seasonal influences.
At the end of December 2010, Slovakia’s job offices registered a total of 334,903 people ready to take jobs immediately. This put the country’s jobless rate at 12.46 percent, up 0.24 percentage points compared to November. The registered jobless rate had decreased by 0.20 percentage points compared with December 2009.

According to Eurostat, the European Union’s statistics office, Slovakia had the second highest unemployment rate in the union in December, at 14.5 percent; only Spain had a higher joblessness rate at 20.2 percent. The average unemployment rate across all 27 countries of the EU was 9.6 percent in December.

“Industry, which has already come back to its pre-crisis [production] level, has not started yet to recruit labour in a more significant way,” Dereník wrote in his bank’s economic analysis memo. “In spite of again a more optimistic outlook for industrial production due to positive developments in Germany, the [Slovak] labour market is not yet awakened. Several studies criticise Slovakia for low labour flexibility because of its Labour Code, especially high layoff costs.”

Analysts expect that the labour market will be adversely affected by layoffs in the public sector during the first months of 2011. The first months of the year also regularly record seasonal increases in unemployment. Nevertheless, positive developments in industrial production and newly announced investments in production of electronic appliances and in the automotive industry might positively influence the labour market by late spring, according to Dereník.

Páleník of the Employment Institute is also optimistic.

“There are visible signs of the end of the crisis even though these signs are often very fragile,” Páleník said. “Production has been increasing but employment has not increased as it should. It is possible to expect that it would lag behind growth in production by six to 12 months. Better employment in foreign countries where Slovaks work, such as the Czech Republic, Ireland and United Kingdom, is also questionable.”

Dereník estimated that Slovakia will have to wait several years for its unemployment rate to return to its pre-crisis level, perhaps until 2017. At the end of 2008, Slovakia’s jobless rate was 8.4 percent. He believes that reform of labour-related legislation and more support for re-training of those who have become long-term unemployed may accelerate the reduction in the unemployment rate.


While the unemployment rate has stabilised and there are some positive prognoses on future job growth, Slovakia’s level of long-term unemployment has been increasing. Slovakia’s job offices are increasingly re-registering people who have been unable to find jobs for more than one year and labour market experts worry that these people are losing their work skills, habits and job knowledge and this will severely decrease their chance of finding work again.

Eurostat’s statistics indicate that Slovakia had the highest long-term unemployment rate in the EU, at 9.4 percent for the third quarter of 2010, followed by Latvia and Estonia at 8.3 percent and 8.2 percent, respectively. The average for the EU27 was 3.8 percent in that quarter.

Labour market experts say that those who fall into the category of long-term unemployed include primarily persons with low levels of education and those with poor qualifications.

“Because of the increasing requirements for qualifications and education this is a hurdle for these people to get a job,” Andrea Hajdúchová from the media department at the Ministry of Labour, Social Affairs and Family told The Slovak Spectator. “People in higher age groups and members of segregated communities also make up a significant proportion of the long-term unemployed.”

Hajdúchová sees these handicaps or some combination of them, for instance high age, low qualifications, lack of practical experience, ethnicity and other factors, as deciding elements in the resistance of long-term unemployment to respond to active labour market policies. She also pointed out that there are regional disparities and persons in Banská Bystrica, Košice and Prešov Regions are particularly suffering from long-term joblessness.

Páleník sees the economic crisis as the primary reason for the large increase in the number of long-term unemployed because many people lost their jobs in 2009 and have been unable to find new jobs since then. For that reason he differentiates between those who have been unable to find a job over the long-term due to the impacts of the crisis and those who were suffering from long-term unemployment before the crisis began.

“The first group is not so problematic,” said Páleník, adding that to solve this kind of long-term unemployment it is only necessary to revive the economy and create new jobs. Along with this he suggested it would be enough to use relatively minor measures within traditional active labour market policies, for example supporting better mobility or some kinds of retraining.

But Páleník sees solving the employment problems of the second group as much more complicated. According to him, only a very large increase in employment would help these persons, after the less-problematic unemployed have already been able to find jobs. He suggests that one measure to address this problem would be to change the social support system so that someone with long-term unemployment actually feels an increase in income after finding a job.

Páleník also believes that reducing or eliminating long-term unemployment requires dealing with the individual problems of these long-term unemployed persons and that across-the-board measures do not work for these individuals. He stated that it is necessary to stimulate individual work motivation with persons who have not been working for years. He believes this is not a task for state job offices but rather for non-state employment services which he said are much more flexible. He said these can be programmes of various kinds of supported employment, called social companies in their original form, but that these could also have different forms as long as they have a long-term and a regular source of financing.

he problem of long-term unemployment and is ambitious to address it through revisions in the country’s Labour Code and other legislation, Hajdúchová said, adding that the previous government of Robert Fico had abused some instruments to help eradicate long-term unemployment, citing the social companies that were created but which she said, were used to help individuals close to the ruling parties.

“When speaking about motivation of employers and employees, we cannot forget about reform of the payroll tax which the Labour Ministry plans to prepare this year,” Hajdúchová said. “It should result in a reduction of payroll taxes for various groups of workers and that should contribute to the growth in employment and self-employment.”

The ministry is also preparing some changes to the law that provides assistance to persons in material need and the government is considering how to divide recipients’ benefit based in part on social solidarity and in part on the person’s merit.

“The first part will go to everybody who is in material need,” Hajdúchová said. “But only those who endeavour to educate themselves, increase their qualifications and get a job will get the second part.”

“This idea is for now in the phase of analyses,” Hajdúchová said. “The Labour Ministry is assessing the functioning and effectiveness of the introduction of the intermediate labour market in other countries and on the basis of evaluation of these analyses and comparisons the ministry will decide whether to implement it in Slovakia.”