2010 was a year of challenges for carmakers operating in Slovakia, all of which had to grapple with the effects of the global economic crisis. Numbers revealed so far indicate that the sector stabilised last year, and the outlook for 2011 looks promising. All three carmakers in Slovakia are already expanding or plan to expand their production here, meaning more car models will be produced, and more people employed in the local automotive industry. 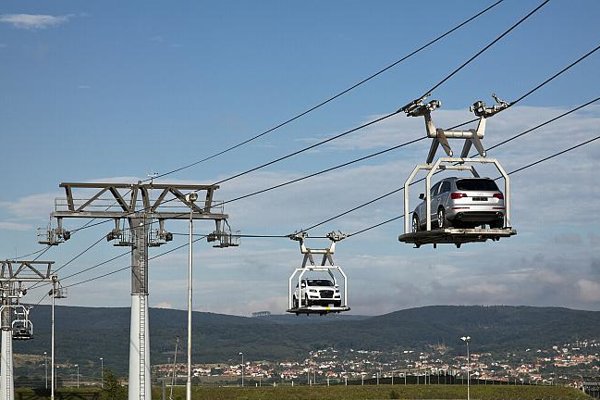 2010 was a year of challenges for carmakers operating in Slovakia, all of which had to grapple with the effects of the global economic crisis. Numbers revealed so far indicate that the sector stabilised last year, and the outlook for 2011 looks promising. All three carmakers in Slovakia are already expanding or plan to expand their production here, meaning more car models will be produced, and more people employed in the local automotive industry.

“2010 had all the signs of stabilisation and, I would even say, indications of a return to the growth dynamics seen before 2008,” Jozef Uhrík, president of the Automotive Industry Association of the Slovak Republic (ZAP SR), told The Slovak Spectator in an assessment of the development of the automotive industry in Slovakia over the last year. “Production, which accounted for about 557,000 cars, represented an increase of almost 20 percent compared with 2009.”

Of the three carmakers in Slovakia, only Volkswagen has revealed official production figures for 2010 so far.

“Volkswagen Slovakia produced 144,510 cars in 2010, an annual increase of over 36 percent,” Andreas Tostmann, CEO of Volkswagen Slovakia, said on March 14. He specified that production had thrived during the second half of the year in particular. During the first half of 2010 the company was still feeling the impact of the economic crisis, but later demand in all markets revived significantly. The turnover of the company grew by 37 percent to €4.04 billion and its taxed profits went up by 31.6 percent to €75 million.

Volkswagen Slovakia, because of its focus on production of high-end sport utility vehicles (SUVs), was hit hard by the global economic crisis. In 2009 it produced fewer than 106,000 vehicles, down from 188,000 in 2008. In 2010, SUVs made up 93 percent of total car production at its Bratislava plant.

Almost all the cars produced in 2010 by VW Slovakia – 99.3 percent – were exported. It is the only plant in the VW group that produces the Volkswagen Touareg and Audi Q7 models. Most of the production – 36 percent – went to Germany last year. But the most dynamically developing market for VW Slovakia’s cars is China, where 18.9 percent of production was exported. Compared with the previous year this represented an increase of 5.7 percentage points. The USA and Russia followed, with 9.4 percent and 5.4 percent respectively. Only 0.7 percent of VW Slovakia’s car production remained in Slovakia.

For Kia Motors Slovakia, the youngest carmaker in Slovakia, 2010 was a groundbreaking year, even though it has not yet revealed its official car production figures.

“We registered record results in production,” Dušan Dvořák, spokesperson of Kia Motors Slovakia told The Slovak Spectator. “This was thanks to the launch of production of two new SUV models, the Kia Sportage and Hyundai ix35, while registering an increasing number of orders during the whole year. Simultaneously, we started production of the new 1.7-litre diesel engine, which we mount into SUV models.”

Kia Motors Slovakia also launched a significant investment exceeding €100 million last year, when it started construction of a second plant for production of engines, which will have an annual capacity of 150,000 units.

PSA Peugeot Citroën Slovakia’s production plant near Trnava has not revealed its official results for 2010 either, but as spokesperson Peter Švec told the SITA newswire in mid December, the figure was below 200,000 cars, down from the 203,732 which rolled off its production lines in 2009.

In terms of the plans of carmakers in Slovakia, Uhrík expects further growth in 2011.

“I expect car production to break the record from 2008, when carmakers in Slovakia manufactured 575,000 cars,” Uhrík said, estimating that production in 2011 will be at least 600,000 to 620,000 cars. This would mean an annual increase of almost 13 percent. He added that new production capacities, construction of which started roughly one-and-a-half years ago, will gradually be completed during 2011 and contribute to the upward trend in Slovakia’s automotive sector.

“The car industry grew during 2010, which was very positive for the whole Slovak economy,” Dvořák said, adding that the automotive industry could also contribute to stronger GDP growth this year, and that apart from Kia Motors Slovakia other car producers are forecasting growth in production. “Many subcontracting companies in Slovakia, which produce car components, raw materials or services for final producers, will feel the positive impact of the growth in car production. "We export cars produced in our company to the whole of Europe and demand for them will depend especially on the situation on the market.”

Kia Motors Slovakia plans to continue its development activities in 2011.

VW Slovakia’s plans for 2011 and the following years are ambitious.

“This year is a milestone for Volkswagen,” said Tostmann. “Our company will this year mark 20 years of operation by Volkswagen in Slovakia. With the launch of production of cars of the New Small Family range we will become the only plant with five brands under one roof in the world. Simultaneously, we will extend our portfolio with a new segment of cars.”

Volkswagen plans to invest €1 billion in Slovakia over the next five years. VW’s investments in the country up to 2010 totalled €1.9 billion.

Investment leading up to the production launch of cars within the New Small Family range should be €308 million; production is due to start later this year. The project will require 1,500 extra workers, expanding Volkswagen Slovakia’s current labour force to 8,500.

Tostmann did not specify exactly when production of New Small Family city cars will be launched.

Volkswagen did not exhibit the highly anticipated city car known as Up! at the Geneva Motor Show in March.

“It is still not the right time to show it,” Volkswagen representatives explained, as quoted by the Hospodárske Noviny daily.

Volkswagen Slovakia could also be where the first E-Up! battery-electric version of its New Small Family car is produced. Tostmann expects a final decision on the production location to be made during the second half of 2011.

Kia Motors Slovakia does not plan to enter the market for hybrid or electric cars this year. According to Dvořák, the company is responding to calls for greener technology by offering its ISG stop&go driving system as an option in its cars. It says this helps to save fuel in city traffic by 10-15 percent. The ISG system was fitted to about 15 percent of cars produced at the Žilina plant last year.

For the time being Kia Motors Slovakia produces three versions of its Kia cee’d model and in 2010 it launched production of two SUV models – the Kia Sportage and the Hyundai ix35. Apart from the Kia Venga, preparations for the production of which are taking place this year, the company is also planning to prepare production of a brand new model in 2012.

According to plans announced in mid December, PSA Peugeot Citroën Slovakia will expand production at its Trnava plant. It was the automaker’s director general, Luciano Biondo, who in an interview with Prime Minister Iveta Radičová said that expansion would bring approximately 1,000 more jobs – up from the current 3,000 – but he did not elaborate. According to information revealed by the automaker’s former CEO, Jean Mouro, the expansion may be to allow production of a hybrid version of the Peugeot 207 model. Currently the Trnava plant manufactures Peugeot 207 and Citroën C3 Picasso models. The latter is produced exclusively in Slovakia.