The legacy of Bauhaus

BAUHAUS was not only an architectural style; it was also a social solution to the problems of the 1920s and 1930s whose concepts remain relevant today. 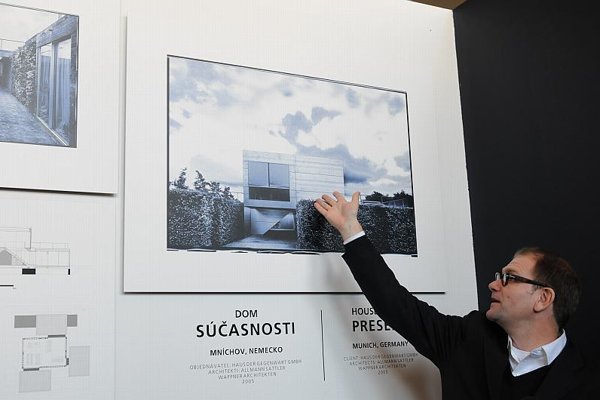 BAUHAUS was not only an architectural style; it was also a social solution to the problems of the 1920s and 1930s whose concepts remain relevant today.

“The future of architecture lies in the application of Bauhaus ideas to today’s problems – including affordable housing, which remains the main architectural issue of the 21st century. The focus of Bauhaus architecture has always been on finding solutions to the fundamental problems of humans in their respective times,” said Michael Siebenbrodt, director of the Bauhaus Museum in Weimar, Germany, in conversation with the American photographer Gordon Watkinson.

Enchanted by the concept of Bauhaus, Watkinson photographed 12 iconic buildings typical of the Bauhaus style and 12 contemporary buildings inspired by or reflecting the ideas of Bauhaus. The photos are on show until March 27 at the Design Factory in Bratislava as part of the exhibition Bauhaus Twenty-21: An Ongoing Legacy. The images not only convey the architectural history of Bauhaus, but go much deeper, uncovering its enduring philosophies and the importance of its legacy for contemporary architects.

From furniture to architecture

Watkinson, a commercial photographer for a broad range of clients from advertising, architecture, design, and fashion, came to Bauhaus through furniture.

“When I first came to Dessau [the German town in which the Bauhaus school is located] I was looking for particular pieces of furniture and didn’t realise they had all been moved to Berlin,” Watkinson said during a 'guided tour' of his exhibit for journalists in Bratislava. “So I had to look at the architecture instead, and I learned a lot while I was there.”

He learned that Bauhaus was not only a style, but also a solution to the social problems of those times that remains relevant today.

“Although the name Bauhaus is well known internationally, few people are truly aware both of the complexity of its history and the diversity of its architectural legacy,” Watkinson wrote on his website.

Bauhaus, which means ‘house for building’ in German, was a school combining crafts and fine arts founded by Walter Gropius in 1919. Here Gropius and other architects introduced principles that shaped the foundation of modern architecture.

As Watkinson explained, one of the basic tasks of architects in the 1920s and 1930s, when large industrial manufacturing needed an inflow of workers, was to design modern and affordable housing for the middle and working classes. How the architects dealt with this task is the subject of Watkinson’s images of Törten, the estate in Dessau designed by Gropius.

When Gropius was assigned to design housing for the middle and working classes in Dessau, he didn’t look to other architects for solutions, but found inspiration in car producer Henry Ford and in standardised industrial modules. At Törten, Gropius used on-site prefabrication and was able to complete six houses in a week.

Törten is one of the 12 iconic buildings selected for the project, which also includes what is probably the most famous Bauhaus building, the building of the school itself, designed by Gropius in 1925.

“All ideas for the education of architects are embodied here,” explained Watkinson. “One of Gropius’ basic ideas was the idea of building blocks. He believed that modular building would make architecture and housing more affordable for the middle and working classes.”

This building also contains a glass wall, embodying the modernist idea of breaking the barrier between nature and architecture and letting the light in, according to Watkinson.

Watkinson worked with two advisors to choose projects to photograph. With Michael Siebenbrodt, he selected 12 historical projects designed between 1923 and 1933. Besides the Bauhaus building and the Törten estate, there is also the steel house by Georg Muche and Richard Paulick in Dessau, the so-called masters’ houses by Gropius in Dessau, House Am Horn by Georg Muche in Weimar, the Trade Union School by Hannes Meyer in Bernau, Germany, and the German Pavilion in Barcelona and Tugendhat Villa in Brno, Czech Republic, both by Ludwig Mies van der Rohe, and others.

Falk Jaeger, who is an architecture critic in Berlin, helped Watkinson select his contemporary subjects. Amongst them are the Federal Environmental Agency designed by Sauerbruch Hutton in 2003; House R128 by Werner Sobek in Stuttgart, Germany; the Solar Estate in Freiburg, Germany by Rolf Disch; and Skywood House in Denham, Great Britain, designed by Graham Phillips. Many of these address the challenge of the day – energy efficiency. For example, the Federal Environmental Agency and the Solar Estate are energy self-sufficient, harnessing geothermal and solar energy using the most modern technologies.

All the images are in black-and-white. Watkinson explained that the photos are not in colour because “the colour of historical buildings immediately dates them, and I wanted to demonstrate that these forms are timeless”.

The exhibit includes furniture, which visitors are invited to use.

“The furniture and architecture of Bauhaus were designed to be together,” said Watkinson, explaining that when designing furniture, architects stuck to the basic ideas of Bauhaus – to produce durable furniture the middle class could afford. “They were looking for materials that would be cheap and sturdy, and the cheapest suitable material they could find was metal bicycle tubing. All of these were originally made from bicycle tubing.”