“THOSE OF you who are less than 25 years old are less Bratislavan than I am,” said Sawkat Choudhury, a physician who came to Bratislava as a medical student in 1985 and stayed, during a debate in Bratislava’s Artforum bookshop which gathered five expats from far-off as well as not-so-distant places who currently reside in the Slovak capital. 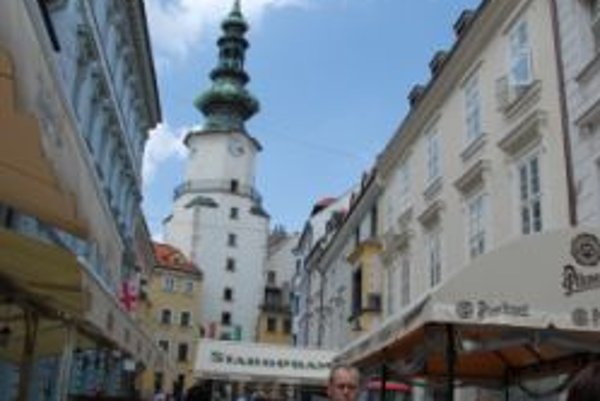 “THOSE OF you who are less than 25 years old are less Bratislavan than I am,” said Sawkat Choudhury, a physician who came to Bratislava as a medical student in 1985 and stayed, during a debate in Bratislava’s Artforum bookshop which gathered five expats from far-off as well as not-so-distant places who currently reside in the Slovak capital.

The debate, entitled “Prepačté, nevjem dobre po slovensku!”[sic] (Excuse me, I don’t speak Slovak that well), was an event organised on March 11 in cooperation with the Milan Šimečka Foundation. It was part of the fourth Bratislava in Artforum Festival, which takes place annually in the Artforum bookshop, a location which has over the years become something of a cult venue in the city. The debate saw Dutch photographer Illah van Oijen, Canadian cafe-owner Ben Pascoe, Macedonian researcher Živka Deleva, American translator and third-sector consultant Janet Livingstone, and Choudhury talking in Slovak about their experiences, impressions and opinions of life in Bratislava in front of a crowded audience.

“Bratislava, on the one hand, has the qualities of Slovakia’s other, smaller cities that people bring with them, but on the other hand there is the pressure of something ‘Pressburger’, diverse, that has always been here – Jewish, Slovak, or German alike,” Choudhury said. “You can see that from people’s behaviour, and I grew to like it much more than the 15-million-strong [city of] Dhaka where I grew up.”

The expats, who admit their manifold identities and who have made Bratislava their home, are returning to the city some of its almost-lost diversity. They spoke about how Bratislava has changed during the time they have lived here, how they dealt with the challenges of living in a foreign city and speaking a foreign language, and how they grew to like it.

“I carry on, and I do my best to make Bratislava my home; I feel good here,” Deleva, who has been living in Bratislava for four years, said of her experiences.

Illah van Oijen, whose book of photography about Bratislava was published recently, said that upon her arrival in Bratislava in 2007 she felt the responsibility of a photographer to document the changes that she saw happening in the city, and that she regarded as huge.

“Bratislava is a topic in my life, I keep dealing with it, I keep taking pictures of it, people keep asking me about it,” van Oijen said, adding that the problem of Bratislava is that its people remain steeped in nostalgia about what Bratislava has lost throughout history. But she believes one needs to be critical and look forward to what can be improved and built in the city.

“I’m home here, now, really, for better or worse,” said Janet Livingstone, who has been in Slovakia since the early 1990s, adding that for her, life in Bratislava is full of contrasts.

Ben Pascoe admitted that thanks to leaving Canada and starting a new life in Bratislava he has had a chance to meet interesting people that he would never get to meet in his home country.

“Every day I miss less and less things from Canada,” he said.

The Bratislava in Artforum Festival lasted from March 10 to March 18 and featured a live debate every night. On March 14, the anniversary of the emergence in 1939 of the wartime Nazi-allied Slovak State – a date which frequently brings supporters of far-right movements onto the streets – the debate was focused on nationalism and patriotism. It was organised as a part of the Enough of Silence protest against fascism and similar tendencies in society. The protest events comprised an exhibition about the persecution of homosexuals in Nazi Germany, a concert and a documentary screening, a film marathon, and debates in the Open Gallery, as well as a debate accompanied by a tasting of traditional Jewish dishes at Artforum.