The British International School Bratislava was established in the leafy suburb of Dubravka, Bratislava in 1997 with 40 students of four or five nationalities. Today it is a thriving school of 630 students comprised of 45 nationalities and with a waiting list for many of its classes, and the school site is therefore being developed to meet the demand for places and further improve its facilities. Although the school was established originally to provide a school for the growing ex-patriate population, some 30% of the school population is Slovak. Parents of these students have deliberately chosen a ‘British International’ education. Why do parents and their children choose BISB? 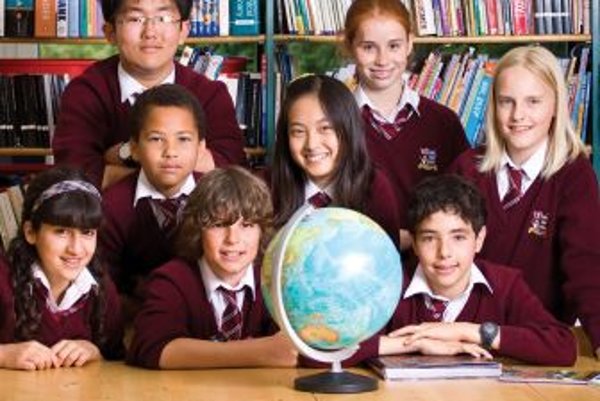 The British International School Bratislava was established in the leafy suburb of Dubravka, Bratislava in 1997 with 40 students of four or five nationalities. Today it is a thriving school of 630 students comprised of 45 nationalities and with a waiting list for many of its classes, and the school site is therefore being developed to meet the demand for places and further improve its facilities. Although the school was established originally to provide a school for the growing ex-patriate population, some 30% of the school population is Slovak. Parents of these students have deliberately chosen a ‘British International’ education. Why do parents and their children choose BISB?

Our mission is to provide an education that provides a doorway to the wider world. It is about preparing students for life. In the 21st Century, ‘life’ is about being a global citizen in a world where the pace of change ever quickens and where the decisions we make on a daily basis link us to the lives of others all over the world. Of course it could be argued that having an understanding of global matters is an inevitable consequence of being at school in a foreign country, possibly in a culture vastly different to your own, or being educated with students from all over the world. However, human nature, being as it is, means that students and families who are moving every two to three years, leading ex-pat lives, often become impervious to the cultures in which they find themselves and take with them from place to place the same set of values and outlooks. Understanding and developing a truly global perspective does not happen by osmosis, and BISB recognizes that it has an ‘active’ role in promoting global citizenship so that we can truly enrich our pupils’ lives with the values and skills they can take with them into university, into work and beyond.

It starts with a curriculum; we adapt the contents of the English National Curriculum so that the topics, people and places are more representative of our student body and our location. The International Baccalaureate Diploma Programme, which is followed by our older students, has a specific mission: ‘to develop inquiring, knowledgeable and caring young people who help to create a better and more peaceful world through intercultural understanding and respect’. Its aim is to ‘encourage students across the world to become active, compassionate and lifelong learners who understand that other people, with their differences, can also be right’. (IBO)

It is important that young people understand that they can not only influence their own lives and well-being but that their actions have an impact on others in a variety of ways they might never have imagined; their consumer choices – the real costs of buying fake goods or imported food or of taking a car instead of public transport. One of our aims is to encourage young people to care about the planet and develop an active concern for all its inhabitants, by getting them to ask themselves these types of questions. Environmental and ethical issues are kept high on the agenda through the curriculum and ethos of the school.

The skills students learn in their subjects are applied to real life situations. Consequently students remain engaged and motivated. In Geography, for example, an IB student set herself the challenge of answering the question ‘Why is Slovakia’s ecological footprint so low compared to other European countries?’ Maths students are set the task of analyzing which type of graphical representation is the most accurate in interpreting Chinese population growth or to apply their newly learnt trigonometry skills to measuring the width of the River Danube. High level English language skills are regarded as one of the most sought after accomplishments in many walks of life, and our students certainly achieve this, but we believe that wider language skills remain an important part of a student’s preparation for a job in the 21st Century. The capacity to learn and operate in a language other than their own demonstrates a respect for other cultures and nations as well as using a facility of the brain that might otherwise weaken. It also opens up more readily the world of international business, diplomacy, law, politics and medicine. All students therefore leave the school speaking a minimum of two languages fluently, and most will speak three and a significant number will speak four or five. ICT competence is a vital part of the learning process with a high ratio of PC or laptops to every student, and classes in film-making and animation.

BISB’s student-led ECO-committee acts as the school’s conscience continually challenging the school leadership team to improve its recycling activities and policies, thereby keeping environmental issues at the forefront of discussion. The December ‘Trashion Show’ has become a regular feature of the school year when teams of young students produce eco fashion designs. This year’s school musical production, ‘The Wizard of Oz’, will be costumed entirely from recycled material. It is important for global citizenship to not only move outside the classroom but also outside the school. Teamwork and leadership skills are further developed in environmental and community projects outside the school environment. We are committed to engaging with the wider community – through participation in the International Award and the Model United Nations. Students have collaborated with schools in the UK and Slovakia in an E-learning project on child evacuation from Central Europe in the 1930s.

All of this goes a long way to producing students well equipped to deal with the challenges of the 21st Century. They are highly adaptable young people, confident, articulate and with good presentational skills. They develop good self knowledge and critical awareness through formal self evaluation of their academic and personal development. They will leave BISB having a strong global network of friends. They understand the need for a balanced lifestyle which includes time for creativity, action and self reflection Their qualifications are recognised by the best university systems, internationally as well as in their own countries.They are shaped through a ‘mix’ of opportunities and experiences that enables them to embrace future challenges. They are independent learners with a skills set that enables access to the global job market with open minds, a social conscience and a sense of the interconnectedness of our world and the impact they can make as individuals.