FEW pieces of art have ever sparked such intense debate in Slovakia as the anthem of the upcoming hockey world championships. 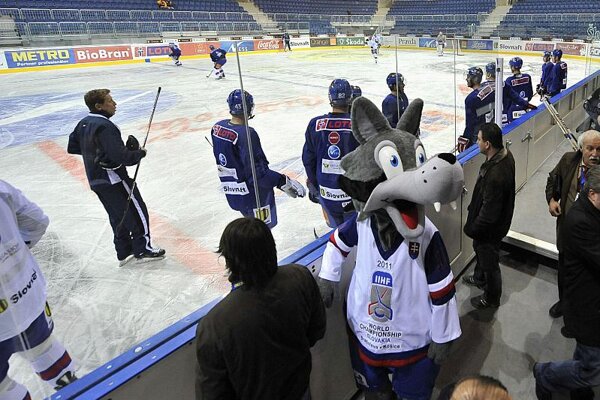 Goooly, the mascot of the championship, will perhaps learn to sing the anthem too. (Source: TASR)
Font size:A-|A+0

FEW pieces of art have ever sparked such intense debate in Slovakia as the anthem of the upcoming hockey world championships.

The public is split roughly into three groups – there are those that like ‘Life is a Game’ by Kristína, which will be the event’s official anthem. There are those that would prefer ‘Lord, let him score’, the national team’s song, to be used for the championships as well. And then there are all the others.

The two hockey songs paint two different pictures of the nation’s psyche. ‘Lord, let him score’ is in Slovak, ‘Life is a Game’ is in English. As the name indicates, the first tune seems to draw inspiration from the country’s religious traditions, and puts victory in the hands of divine powers. The other places more emphasis on the role of the individual, although it too leaves room for the supernatural:

“Today is your day.


This is the moment when


On the top of your wave.


No one can stop you from


You’ve got the magic when


your stars are aligned.


Fill the world with

The older song doesn’t forget to mention the hurts of the past, a typical trait of the Slovak mentality:

“How often you stood alone,


How many hits you


How often you were in

But in contrast to the individualistic Kristína, the chorus clearly emphasises team spirit:


We play the game so well,


Will they forget us all.”

So whether you are a modern English-speaking individualist, or a slightly religious collectivist, there is a hockey song that will suit your needs. It’s almost a shame that both can’t have the status of the official anthem. Oh well, as Kristína sings:


Life is a game


We're all born to play


Long is the way


Sometimes it's not right


Sometimes it's not fair.”