The “A” Train rolls into Bratislava

ONE OF the most eagerly awaited events on the 2011 cultural agenda of Bratislava is only days away. For a few hours on April 3, Bratislava will become the capital of jazz virtuosity, or so it would seem, with the legendary Duke Ellington Orchestra visiting Slovakia for the first time. 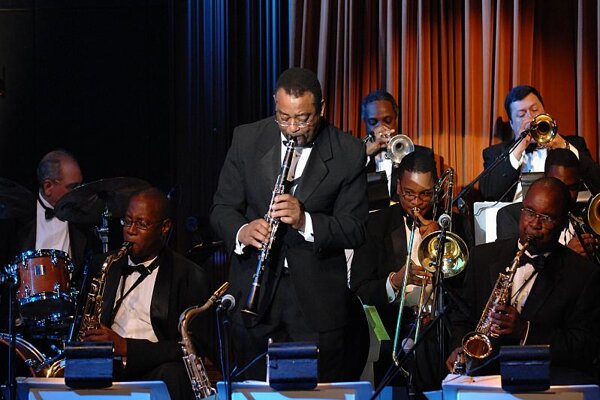 The orchestra in action. (Source: Courtesy of the US Embassy)
Font size:A-|A+0

ONE OF the most eagerly awaited events on the 2011 cultural agenda of Bratislava is only days away. For a few hours on April 3, Bratislava will become the capital of jazz virtuosity, or so it would seem, with the legendary Duke Ellington Orchestra visiting Slovakia for the first time.

Organisers are warning that time is quickly running out to decide whether to attend because 700 of the 860 available seats have already been sold.

Similar news is coming from the other American and European cities that the orchestra is visiting this spring, confirming that 36 years after his death the “grand duke of swing” has not left the hearts of his millions of fans.

“It is not an exaggeration to say that Ellington is an American jazz legend,” Chris Sharf from the US Embassy in Bratislava told The Slovak Spectator. “He was one of the most important composers and band leaders in the history of jazz.”

Edward “Duke” Ellington, born in 1899, is credited with over 1,000 compositions spanning many genres including pop, blues, classical, gospel, and, most importantly, jazz. Among his best-known songs are Take the “A” Train, Sophisticated Lady, It Don’t Mean a Thing (If It Ain’t Got That Swing) and Mood Indigo.

Ellington founded his orchestra in 1923 and remained its leader until his death in 1974. Now under the direction of his grandson, Paul Mercer Ellington, the ensemble keeps the Duke’s genius alive with dozens of performances worldwide every year, including gigs at prestigious events such as the Tokyo Jazz Festival and the Cape May Jazz Festival.

But until now Slovak jazz enthusiasts have not had the opportunity to experience the virtuosity with which the orchestra performs Ellington’s evergreen tunes.

So after a successful appearance in the Czech Republic last spring when Prague’s Lucerna concert hall was completely sold-out, the Duke Ellington Orchestra decided to give a show in Slovakia as well.

The concert will be held under the auspices of the US Embassy in Bratislava.

“We are aware that it is difficult to produce high-quality jazz performances in a relatively limited market so we are happy to support, if only in a symbolic way, such a landmark event as the Duke Ellington Orchestra’s first visit to Bratislava and we are very pleased to help bring this extraordinary musical experience to Slovak jazz fans,” said Sharf.

And to ensure that the concert is even more of an “extraordinary musical experience” the organisers have invited a strong supporting line-up to join the legendary American big band.

“We wanted to offer the Slovak audience something really special,” said Pavel Tesař from the Brnokoncert agency that is the promoter of the concert. “That is why we have asked the fantastic Peter Lipa and the marvellous Juraj Bartoš to come and play a couple of songs with the orchestra.”

Peter Lipa is an award-winning Slovak singer-songwriter, considered by some journalists to be the “father of Slovak jazz”. For many years, he has worked as the programme director for the Bratislava Jazz Days.

Trumpeter Juraj Bartoš, no less renowned than Lipa, is famous for both his jazz and classical-music skills. He is the founder and director of the Bratislava Hot Serenaders ensemble.

The Duke Ellington Orchestra, supported by Peter Lipa and Juraj Bartoš, will perform in the New Building of the Slovak National Theatre on April 3 at 20:00. Tickets range from €49 to €99. For more information, see www.brnokoncert.cz or www.peterlipa.com.