STATE-OWNED railway company ZSSK Cargo has started implementing mass layoffs. The company’s general director, Pavol Ďuriník, confirmed on March 30 that about 150 workers will lose their jobs in early April, to be followed by 200 more in early June, 700 in early July and another 700 by the end of 2011. Altogether ZSSK Cargo will eliminate 1,800 positions from its total labour force of about 9,000. 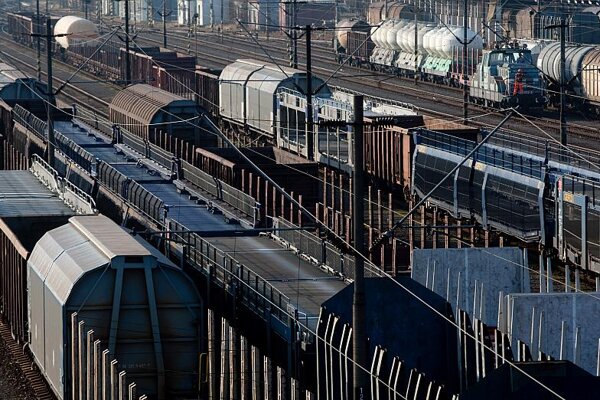 STATE-OWNED railway company ZSSK Cargo has started implementing mass layoffs. The company’s general director, Pavol Ďuriník, confirmed on March 30 that about 150 workers will lose their jobs in early April, to be followed by 200 more in early June, 700 in early July and another 700 by the end of 2011. Altogether ZSSK Cargo will eliminate 1,800 positions from its total labour force of about 9,000.

The layoffs among Cargo employees are part of an extensive revitalisation plan for Slovakia’s three railway companies adopted by the cabinet of Iveta Radičová on March 16. In addition to the sacking of thousands of employees, the plan will also reduce railway passenger routes and pave the way for sale of a majority stake in ZSSK Cargo.

"It isn't about layoffs but about rescue," said Transport Minister Ján Figeľ on March 16, as quoted by the TASR newswire. “The current situation is no longer sustainable. The overall indebtedness of the three companies has climbed to €1 billion.”

Ľubomír Palčák, director of the Žilina-based Transport Research Institute (VÚD), views the problems in the railway sector as long-term, going back to before 1993, when Slovakia was a federal republic within Czechoslovakia.

“One of these problems is that on one hand we want the railway companies to operate, and I think that this is the correct approach, under a clear economic environment, but on the other hand it is very difficult to push through any changes which would affect this environment in a more significant way because the railway sector was always important from the viewpoint of employment,” Palčák told The Slovak Spectator. He added that political involvement, from either the right or the left, has complicated the situation even more.

He believes the government’s revitalisation programme is moving in the right direction.

“I think it has happened sometimes to name the problems in the railway sector but then not to start solutions,” Palčák said. “Now at least there is an effort to bring order in the railway companies’ economic operations and I believe this is a correct direction.”

“This might bring savings or at least better quality to public transport, which is also covered from public finances,” Palčák said.

The overall revitalisation programme for Slovakia’s three railway companies proposes to lay off around 5,000 employees within three years and projects that the companies would at least start to break even within that timeframe.

The programme also seeks to secure settlement of receivables between the railway firms and the state and to optimise the setup of the railway sector. While Cargo is to lay off one fifth of its staff, the railway infrastructure operator, Železnice Slovenskej Republiky (ŽSR), is expected to declare 2,700 employees redundant in two phases by the end of 2012, accounting for about 16 percent of its current workforce.

Slovakia’s passenger railway company, Železničná Spoločnosť Slovensko (ZSSK), will lay off 621 employees in five stages by the end of 2013, about 12 percent of its workforce. The actual number of people laid off at ZSSK may be lower, as the company announced a smaller reduction in train connections than those announced in the original revitalisation programme. The new, reduced train schedules will start on May 1.

ZSSK will completely terminate passenger service on five routes that it evaluated as inefficient. Another 314 passenger routes will be reduced in terms of scheduled times or their overall length, according to the SITA newswire.

The Transport Ministry will also seek to find a strategic investment partner for ZSSK Cargo and plans to hold an international tender by June 2012 that will offer an ownership stake of at least 66 percent in the company. The Finance Ministry had proposed to sell the state’s entire 100-percent ownership stake in Cargo.

Palčák said railway cargo transport is a globalised business today and companies which want to succeed in this market must be linked with other strong players. In selecting a strategic partner for ZSSK Cargo, Palčák said that foreign partners who would bring added value but not competition for the Slovak company are the most interesting and said these could include Russian Railways, České Dráhy from the Czech Republic, or German railways, but Palčák noted that the latter two options could bring possible problems with competition.

Former transport minister Ľubomír Vážny has criticised the revitalisation plan, saying that it focuses only on reducing costs while not solving the issue of how to increase revenue. Current officials in the Transport Ministry insist that cost reductions are necessary or the railway companies could otherwise go belly-up.

“If we do not reduce the railway labour force, we would endanger another 27,000 working positions,” said Krajčovič. “This means that this [programme] is rather about salvaging employment. In this respect I would like to point out that most layoffs affect the too-extensive administration… This step [reducing the workforce] is not pleasant for anybody but it is inevitable. We are preparing, in cooperation with the Labour Ministry, a national social programme with over €7 million for those who will be laid off.”

The railway companies have said that they view the government’s revitalisation programme as a positive step and said they would have welcomed it even earlier.

“ZSSK Cargo welcomes the approved programme for revitalisation of the railway sector,” Martin Halanda, spokesperson for ZSSK Cargo, told The Slovak Spectator. “It will enable us to adopt measures revitalising the company and prepare it for the entry of a strategic investor. The part of the programme related to ZSSK Cargo is set up in a very realistic way and thus we do not expect that we would fail to achieve its goals.”

The new management at ZSSK Cargo started remedial measures immediately after they assumed their positions in the fall of 2010, Halanda said, adding that these efforts have yielded cost savings of over €30 million.

The revitalisation programme also proposes a method to deal with settlement of the €166 million subsidy that Cargo received from the state in 2009. Halanda told The Slovak Spectator that the Finance Ministry has postponed the start of repayments for one year and added that the company’s debt is expected to be covered from proceeds from the sale of the majority stake.

ZSSK also views the Slovak cabinet’s revitalisation programme as a positive step, according to ZSSK spokesperson Alexander Buzinkay, who added “it is a pity that it is arriving with a delay of two months because our stances were already clear and pre-negotiated in December [2010] and nothing about them has changed.”