POLITICAL parties will now get a much clearer picture of the preferences of their MPs when it comes to selecting Slovakia’s next general prosecutor, one of the most powerful positions in the country. 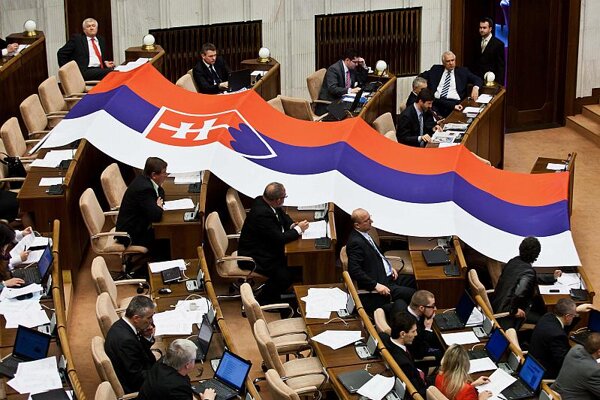 POLITICAL parties will now get a much clearer picture of the preferences of their MPs when it comes to selecting Slovakia’s next general prosecutor, one of the most powerful positions in the country.

Parliament on April 5 changed the rules for selecting the general prosecutor, judges of the Constitutional Court and the chairs and deputy chairs of the Supreme Audit Office (NKÚ), Slovakia’s public administration and procurement watchdog. Henceforth, the selection votes will be held as public or recorded votes, as opposed to the previous secret ballots. Under the amendment to the parliamentary discussion order, however, the speaker and deputy speakers of parliament as well as the chairs of the parliamentary committees will still be chosen by secret ballot. The amendment also introduces the option for MPs to hold a secret vote on other posts for which a public ballot would otherwise be held. At least 15 legislators are required to propose a secret vote.

While the change increases the ruling coalition’s chances of getting its nominee selected as the next general prosecutor, opposition Smer party leader Robert Fico decried the change, saying “the neck of Slovak democracy has just been broken”.

Political analysts, however, have been at a loss to detect any such threat to the country’s democracy from a change which will make MPs accountable for their choices rather than allowing them to vote anonymously. On the contrary, the analysts suggest that Fico may fear that a new general prosecutor will open some sensitive cases from his own time in office that have until now remained undisturbed.

“This is one of the most shameful votes in the history of the Slovak Parliament and it only proves how these gentlemen who are sitting in the ruling coalition are capable of anything in the name of power, [by] taking over the Office of the General Prosecutor, and persecution and criminalisation of the opposition,” Fico said, as quoted by the public broadcaster Slovak Television on April 5.

However, leading commentators cast doubt on their claims.

“A public vote is just as democratic as a secret ballot; there isn’t much difference in that,” political scientist Miroslav Kusý told The Slovak Spectator. “Both ballots have their plusses and minuses.”

Political scientist and president of the Institute for Public Affairs (IVO) Grigorij Mesežnikov told The Slovak Spectator that Smer’s reasons for attacking the ruling coalition are false and “perhaps fuelled by the fear that the new general prosecutor will start investigating some cases that had been shelved by the previous general prosecutor”.

“This is where I see the cause of Fico’s current aggressiveness,” Mesežnikov said. “I do not see any other reason.”

Žitňanská argued in late March that a public vote in a parliamentary democracy is one way for voters to observe how their elected representatives use the mandate they have been given. She added that a public vote is forbidden only in specific instances stipulated by the constitution, and that the general prosecutor vote is not such an instance.

“Therefore I consider an open vote to be an absolutely democratic tool and it is up to deputies whether they opt for an open or a secret vote,” she said, as reported by the SITA newswire.

Meanwhile, President Ivan Gašparovič, speaking through his spokesperson Marek Trubač, said that he believes the general prosecutor should continue to be selected via a secret ballot, arguing that this allows deputies to vote based on their consciences and not orders from party headquarters. Gašparovič might therefore veto the law and return it to parliament, the Sme daily reported.

Why make the vote public?

For a general prosecutor to be selected by MPs he or she must win a majority of those present in parliament. In the first, secret, round of voting for the next general prosecutor, which was held in early November 2010 and involved 147 MPs, the incumbent, Dobroslav Trnka, received 70 ‘yes’ votes and 60 ‘no’ votes, with 17 deputies abstaining; Mária Mišíková, backed by the governing Christian Democratic Movement (KDH), Freedom and Solidarity (SaS) and Most-Híd, had the support of 49 MPs and was opposed by 84, with 14 abstaining; while Ján Hrivnák, nominated by the governing Slovak Democratic and Christian Union (SDKÚ), was supported by 28 MPs, with 98 votes against and 21 abstentions. SDKÚ MPs then caused the run-off between Mišíková and Trnka to end inconclusively by registering for the ballot but not casting any votes, ensuring that neither candidate received a majority among the MPs present.

Tensions emerged within the ruling coalition after it failed to get Jozef Čentéš, the joint candidate it subsequently agreed on, selected as general prosecutor at a secret ballot on December 2. In that vote, at least six coalition deputies used their anonymous votes to side with Fico’s Smer party and back Trnka. This was despite Prime Minister Iveta Radičová saying that she would resign if Trnka won.

Their attempt failed, by one vote, but the move prompted a round of claim and counter-claim within the coalition at what seemed to be an internal plot to unseat the prime minister.

On December 7 the ruling coalition parties deliberately executed another failed vote in order to allow time to change the voting rules to make MPs’ votes public. A day before the December 7 vote, the leaders of the four parties agreed that their MPs would take ballots but not cast them, ensuring that Trnka would not receive the support of a majority of the MPs present.

Kusý noted that the change to the voting procedure had occurred after the ruling coalition failed to select a general prosecutor, but added that “in politics all changes are made with a specific purpose”. He said he does not see politics affecting the actual position as a result of the change in voting process used to select its occupant.

“Of course it is a political matter and it is understood as a highly political issue: this is why there is so much importance attached to it,” Kusý said.

Mesežnikov said that even though changing the secret ballot to a public vote was driven by a specific purpose, it is still legitimate and is in line with the concept of a free mandate.

“Most of the votes in the Slovak Parliament are public, which means that the free execution of the mandate will not be endangered in any way at all by making deputies vote publicly; this is how it happens in the case of many laws,” said Mesežnikov.

As for Smer’s attitude towards the vote, Kusý says that Fico tends to turn everything into a campaign and is using this issue as a chance to attack the ruling coalition and thus increase his political support.

“The change provided him with a good reason to attack,” Kusý concluded.


The ruling coalition has agreed that it will again propose Čentéš for the post of general prosecutor when MPs next vote on the issue, although it is not yet clear when that will be.