FINDING a director for Slovakia’s National Security Bureau (NBÚ) is proving difficult for the ruling coalition. After being criticised for not immediately acting to replace the previous government’s NBÚ chief, who had allegedly been a communist-era secret agent, the four coalition parties are now facing an internal disagreement about who to nominate to lead the NBÚ. 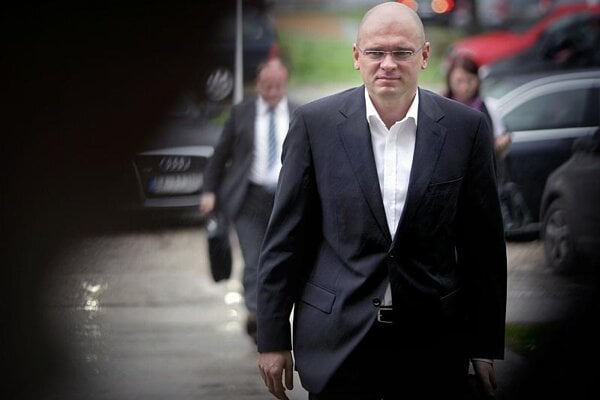 FINDING a director for Slovakia’s National Security Bureau (NBÚ) is proving difficult for the ruling coalition. After being criticised for not immediately acting to replace the previous government’s NBÚ chief, who had allegedly been a communist-era secret agent, the four coalition parties are now facing an internal disagreement about who to nominate to lead the NBÚ.

At an April 4 meeting of the Coalition Council, the Freedom and Solidarity (SaS) party proposed a candidate to replace František Blanárik, who resigned from his post on March 7, more than two years before his term was due to end. SaS nominated Ján Stano as the new NBÚ director but the three other coalition partners responded that they were not familiar with Stano and wanted to know more about his past. The coalition agreed to take a week, until April 11, to consider SaS’s proposed candidate more carefully.

Objections to Stano started surfacing soon afterwards from various quarters because he had worked for the Slovak Information Service (SIS), the state intelligence agency, from 1995 to 1998, during the era of prime minister Vladimír Mečiar and former SIS chief Ivan Lexa, when the SIS was accused of engaging in various criminal activities.

Stano confirmed to the Sme daily that he was a staff member of SIS’s central analytical section, which he said at that time was involved in protecting the country from the activities of foreign intelligence services. SaS leader Richard Sulík stated at a press conference on April 6 that Stano was not involved in any management role at SIS, had never spoken with Ivan Lexa, and had not known him at all. Sulík said Stano got his job at the SIS after replying to a job offer which stated that a state administration body, which later turned out to be the SIS, was looking for a computer programmer.

“He is a man with a good name, the necessary professional experience and I am convinced that he will lead the office responsibly,” Sulík commented, as quoted by Sme on April 5.

The other coalition partners have suggested that they might have problems supporting Stano as head of the NBÚ.

“The KDH [Christian Democratic Movement] has got a serious problem with the proposed candidate, since he worked at the SIS in the period when Ivan Lexa was its director,” KDH spokesperson Matej Kováč told The Slovak Spectator.

He added that the party will share its final decision about the nomination at the coalition partners’ next meeting. According to the agreement between the four parties, the SaS gets to nominate the head of the NBÚ, but the KDH said that it is ready to propose candidates too.

“We are ready to offer serious candidates,” said Ján Figeľ, the party’s chair, as quoted by the TASR newswire.

Another coalition party, Most-Híd, said it does not mind Stano’s work for the SIS per se, but does have reservations about the fact that Stano worked for the analytical department of the SIS under Ivan Lexa, party spokesperson Nora Czuczorová told The Slovak Spectator. The party is now gathering more information, but its future support for Stano is questionable.

The fourth party in the governing coalition, the Slovak Democratic and Christian Union (SDKÚ) stated that it will not comment about Stano’s nomination before the next meeting of the Coalition Council scheduled for April 11.

If Stano turns out to be unacceptable as a joint candidate of the coalition partners, SaS has stated that it is ready to offer other candidates.

The top position at the NBÚ has proved problematic in the past as well. The credibility of the bureau was brought into question after Blanárik was reported to have been an agent in the communist-era counter-intelligence service.

Blanárik, who was appointed by the previous ruling coalition led by Robert Fico’s Smer party, garnered much criticism from parts of the then-opposition, which now makes up the ruling coalition, because of his alleged links to the communist secret service.

Now, nine months after the change in political power, some in the media have noted that Blanárik remained in his post even though the leaders of SaS had boasted that their party does not accept former communists as members.

On March 7 Blanárik announced his resignation, stating that he did not intend to become a victim of political gamesmanship. Nevertheless, he is expected to continue to lead the NBÚ until the end of April. The NBÚ is an important component of Slovakia’s power structure because it has the authority to issue security clearances.