EVEN though the government of Iveta Radičová, which took power after last June’s parliamentary elections, has already adopted several new laws designed to improve the business environment in Slovakia, firms say they have yet to see any significant improvement and still face repeated obstacles when doing business. They are calling for improvement of the present low enforceability of laws, a reduction in red tape, an improvement in the lagging education system, and – especially – the eradication of corruption. 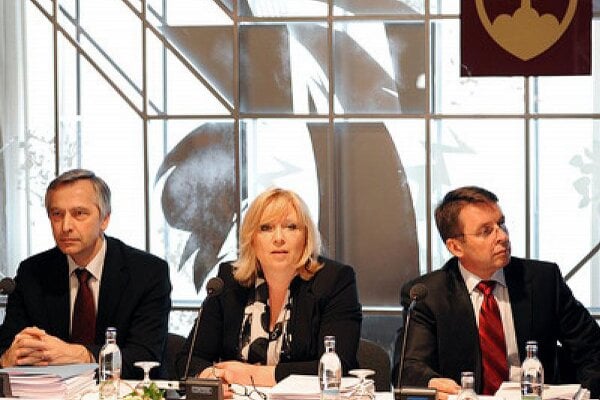 EVEN though the government of Iveta Radičová, which took power after last June’s parliamentary elections, has already adopted several new laws designed to improve the business environment in Slovakia, firms say they have yet to see any significant improvement and still face repeated obstacles when doing business. They are calling for improvement of the present low enforceability of laws, a reduction in red tape, an improvement in the lagging education system, and – especially – the eradication of corruption.

“Businesspeople assess most of the laws adopted after the parliamentary election in 2010 positively,” Róbert Kičina, the executive director of the Slovak Business Alliance (PAS) told The Slovak Spectator. “The introduction of the duty to publish on the internet contracts involving the state has had the biggest positive response.”

And businesses reacted positively to the programme that the Radičová government set out for its four-year term.

On the opposite side of the ranking are changes in laws related to taxes and compulsory contributions.

“Changes in health insurance premiums, flowing from the new duty to pay contributions from profit sharing, and the amendment increasing value added tax to 20 percent were the most negatively perceived changes,” Kičina said.

Even though most of the new laws are regarded positively, Kičina said that this has not translated into significantly greater optimism about the business environment.

“The development of the Business Environment Index indicates that the new cabinet of Iveta Radičová has not persuaded businesspeople so far,” said Kičina, who ascribes this effect to the weak ‘fighting power’ of the cabinet and a lack of clarity over reforms in the pipeline, especially changes to compulsory contributions.

Richard Ďurana, the director of the economic think tank INESS, agrees that changes so far have not brought any significant improvement in the business environment.

“We are still waiting for changes that might make doing business simpler,” said Ďurana.


Attempting to describe the Slovak business environment, Ďurana used a comparison with other European countries.

“According to Doing Business 2011, in which the World Bank each year maps the quality of the business environment in 183 countries, Slovakia was in 41st place, indicating that there is still huge room for improvement,” said Ďurana.

When it comes to identifying barriers to doing business in Slovakia, Ďurana again cited the World Bank survey, this time focusing on the life cycles of small- and medium-sized companies. The view in some categories is not very optimistic, he said.

“For example, in paying taxes Slovakia placed 122nd, and this is not only in terms of height of taxes but also due to the amount of administrative steps that are connected with payment of taxes,” Ďurana said, adding that in the category of trading across borders Slovakia is 102nd, in particular due to the number of forms which businesspeople need to fill in. Slovakia was also given an unflattering 71st place in the category of enforcing contracts. This indicates that businesspeople in Slovakia do not enjoy a very simple life when compared to large numbers of other countries.

According to Kičina, entrepreneurs continue to see low enforceability of the law, an ineffective social system, corruption, red tape, the lagging education system, and the low comprehensibility of legislation as chronic barriers to doing business. At the end of 2010 this list of barriers was extended by the addition of price instability and partial changes in compulsory contributions which were received poorly by businesses.

“These barriers are retarding economic growth, consuming resources which could be used for the development of private businesses, slowing down the creation of new jobs and worsening the competitiveness of Slovakia in terms of obtaining new investments,” said Kičina. “Even though reforms in many segments are being just prepared, partial measures introduced by the new cabinet have not brought any tangible effects so far.”

Markus Halt, spokesman for the German-Slovak Chamber of Industry and Commerce, pointed out to The Slovak Spectator that according to a current survey among foreign investors the most worrying barrier is not the legislation itself but its patchy enforcement.

“Due to inefficiencies in Slovak jurisdiction trials are often unnecessarily prolonged to several years, making it hard for businesses to realise their claims,” Halt said. “In practice this means they [the claims] are written off. Further barriers occur when participating in public tenders. The lack of transparency in the selection process is a potential gateway for clientelism and corruption.”

According to Halt, the law on public procurement also discriminates against foreign bidders and added that labour legislation does not provide the flexibility businesses need to control employment effectively, saying this is particularly true for arranging working hours and and in the costs of hiring and firing.

The Justice Ministry is set to produce a new public procurement bill by June 30 and has called on foreign chambers of commerce to submit their comments.

“We appreciate the ministry's willingness to listen to the concerns of foreign investors and its aim to make the system more transparent,” said Halt. “Although the reform process is still not finished, despite initial promises, we prefer a long-term but watertight law instead of a short-term but faulty solution. In any case, the law needs clearly and strictly stipulated rules for the bidding and selection process. If that happens conditions for more transparency will have been laid.”

Jake Slegers, the executive director of the American Chamber of Commerce in Slovakia (AmCham) also believes that public procurement in Slovakia needs to be completely revised.

“AmCham is eager and willing to participate in review of legislation,” Slegers told The Slovak Spectator.

Kičina says that there is some legislation already in the pipeline which could improve Slovakia’s business environment. As an example, he lists revision of the Labour Code, which will introduce more flexibility to labour relations.

“The fact that not just businesses but also employees and jobseekers will benefit from these changes is rarely emphasised, which is something I regret,” Kičina said. “Slovakia already has positive experience from a flexible Labour Code when, along with other reforms, it reduced the unemployment rate from 20 to nearly 7 percent.”

Halt believes that there are also other areas of legislation that should be addressed in order to improve the business environment.

“Judicial reform must ensure that the courts work more effectively and that proceedings periods are reduced significantly,” he said.

Corruption is one of the top problems affecting the business environment in Slovakia. Kičina acknowledged that the new cabinet declared its interest in solving this problem right from the start.

“The first visible solution is the obligatory publication of contracts by state institutions on the internet,” said Kičina. “Another step might be the major amendment to the Act on Public Procurement because this is the segment in which business entities have indicated the highest incidence of corruption. Another field is EU funds and subsidies. Simplification of the administration when submitting applications and more comprehensible information about the effectiveness of the usage of European funds may help in the case of EU money.”

According to Kičina, removal of these barriers could enhance the business environment.

“It is not necessary to target all of them: it would be enough to improve the situation in one or two problem areas per year,” Kičina said. He added that PAS had formulated concrete recommendations for improvement of the business environment in a report on the subject. “I am glad that a number of our recommendations have also been included in the cabinet’s four-year programme and I believe that these will later be translated into legislation,” Kičina commented.

According to Ďurana, the best solution for eradication of corruption is elimination of the influence of the state, in the form of removal of administrative barriers, investment stimuli, various regulations, and so on.

Revision of the Labour Code and tax system

Kičina regards the current efforts of the Radičová government to revise the Labour Code and revamp the tax and contributions system with some bewilderment.

According to Ďurana, the Labour Code needs changes that will make employing and laying people off more simple and which will deliver more freedom for bargaining between the employer and the employee. He said this would curb the influence of the third party – the state – in employment contracts.

German investors hope that the government’s efforts to amend the Labour Code will bring some improvement in the hiring and firing process, and the introduction of working-time accounts in companies. But they are calling, among other things, for further changes, including equal treatment of trade unions and other institutions of employee representation, automatic termination of labour contracts when employees reach retirement age in order to improve employment prospects for young people, and reduction of the notice period for vacation shutdowns to three months in advance so that companies can react more flexibly to changes in demand.

“The planned reform of the payroll tax system is intended to reduce bureaucracy, which is to be appreciated in any form,” said Halt. “However, the high payroll tax burden remains unchanged. As a result, there will not be any significant reduction in costs for employers and thus business activities will not be stimulated by the reform.”