TWO natural disasters hit Slovakia in the past several days. After strong winds caused severe damage in the north-east of the country last Friday, large areas of virgin forest in central Slovakia were destroyed by a fire that started near the village of Staré Hory on Saturday. 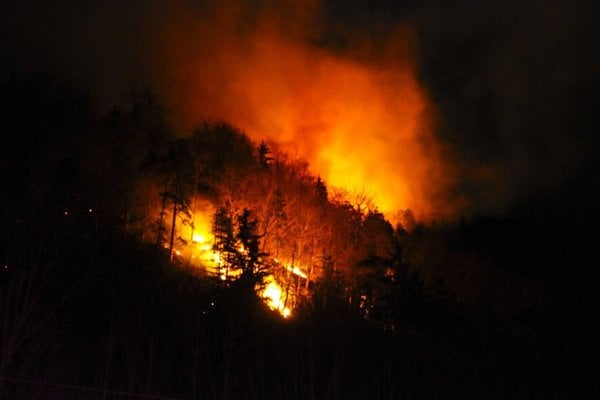 TWO natural disasters hit Slovakia in the past several days. After strong winds caused severe damage in the north-east of the country last Friday, large areas of virgin forest in central Slovakia were destroyed by a fire that started near the village of Staré Hory on Saturday.

For three days, strong winds – classified as a whirlwind – blew over the High Tatra mountains causing local authorities to issue a state of alert from the morning of April 8 until noon on April 11. Locals in the Tatras still vividly remember the 2004 disaster when strong winds damaged strips of the high forests and significantly changed the face of the popular mountain resort area. This time damage included many fallen trees and several roofs blown apart by the wind. Most damages were reported in the districts of Poprad, Levoča, Gelnica and Spišská Nová Ves as well as in the Orava region.

The SITA newswire reported that damages in the High Tatras amount to €250,000. The wind also caused complications in local transport as cable cars in the mountains suspended operations for three days and parts of the local tram routes – between Starý Smokovec and Tatranská Lomnica – were closed as well.

The state-run forest administration in the High Tatras reported direct damages to the forests of €750,000 by April 11 and another €17,000 in property damage.

The Slovak Hydro-Meteorological Institute (SHMÚ) issued strong-wind warnings for April 12 for the western-Slovak regions of Záhorie and the Danube lowlands as well as for district in northern Slovakia: Orava, Kysuce, Turiec, Liptov, Horehronie and Spiš, with winds expected to reach speeds up to 25 metres per second.

But wind alone was not the only source of destruction to Slovak forests. In the village of Horny Jelenec - Staré Hory, in Banská Bystrica district, fire started around noon on April 10 and within one day it consumed almost 100 hectares of mixed forests, parts of which were inaccessible virgin areas. SITA wrote that the fire caused damages amounting to €222,000 and that 178 professional fire fighters from Banská Bystrica, Žilina, Prešov and Bratislava regions, along with 20 cistern pumps, were on the scene to cope with the fire, accompanied by members of the local fire fighter groups and forest workers. Four helicopters from the armed forces and the interior department helped to extinguish the fire as well.

The teams of fire fighters managed to bring the fire under control and prevent it from spreading further on the evening of April 11.

“I’d be lying if I didn’t say that I’m satisfied,” Alexander Nejedlý, the president of the Fire Fighter and Rescue Corps said at a press briefing on the evening of April 11, as quoted by SITA. “We’ve done derring-do here; the boys have gone to the bottom of their powers, carrying material on their backs to almost rock-climber terrain.”

Nejedlý said he expected the fire would take another one to three days to completely extinguish. A big fire caused damages in the same region, but on the opposite slopes of the Jelenská valley, in April 2007 when it struck 113 hectares of forests and took 10 days to extinguish.