Nothing to do? Build a castle!

ONE STONE to kill two birds: that is the basic idea behind the Culture Ministry’s heritage-protection-meets-labour-market-needs plan, under which some of the country’s long-term unemployed will be put to work restoring Slovakia’s castles. The ministry said castle restoration could be speeded up because of lower labour costs and at the same time jobless persons would get the chance to re-establish working habits that might have deteriorated during long-term unemployment. But not everyone may fully share the enthusiasm of the ministry: similar projects in the recent past, paying minimum wage, have hardly been embraced by those seeking work. 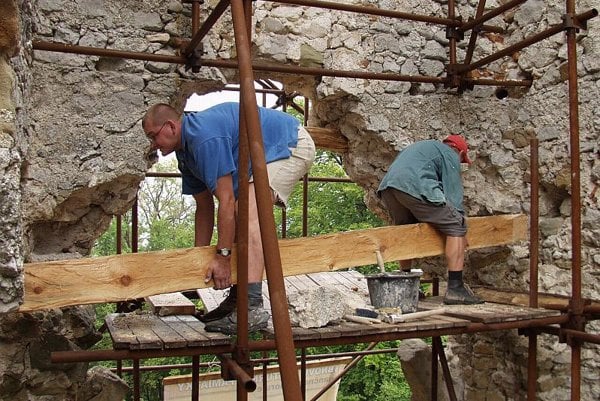 ONE STONE to kill two birds: that is the basic idea behind the Culture Ministry’s heritage-protection-meets-labour-market-needs plan, under which some of the country’s long-term unemployed will be put to work restoring Slovakia’s castles. The ministry said castle restoration could be speeded up because of lower labour costs and at the same time jobless persons would get the chance to re-establish working habits that might have deteriorated during long-term unemployment. But not everyone may fully share the enthusiasm of the ministry: similar projects in the recent past, paying minimum wage, have hardly been embraced by those seeking work.

Beginning in May, unemployed people from nearby municipalities are expected to start doing restoration work at two historical monuments – Šariš Castle in eastern Slovakia and Uhrovec Castle in western Slovakia.

The pilot version of the project was presented by the Culture Ministry and the Central Office of Labour, Social Affairs and Family (ÚPSVaR), which deals with the unemployed.

Both government offices state they are seeking to offer a single solution for two problems: deteriorating monuments and long-term unemployment. ÚPSVaR will contribute by selecting persons for the project from among those registered at regional labour offices, while contributing funds re-allocated from cancelled or ineffective projects.

The initial plans call for 20 long-term unemployed people to start working at Uhrovec Castle with an additional 30 to report to Šariš. ÚPSVaR expects the project not only to have a positive impact on the country’s employment figures but also to help the jobseekers maintain their working habits and provide them with a better opportunity for employment in the labour market after the project ends, ÚPSVaR spokesperson Danica Lehocká said.

Protection and restoration of historical monuments is among the priorities of Culture Minister Daniel Krajcer, who announced earlier in March that projects to protect and restore national monuments in 2011 will receive the highest amount of state financial aid ever, amounting to about €144 million, most of it coming from the EU’s Regional Operational Programme, and much smaller amounts coming from tourism support programmes and from the Norwegian Financial Mechanism.

Krajcer is very enthusiastic about the project and called it a win-win approach, saying it brings immediate benefits to unemployed persons as well as to the castles. He also stated it will have additional longer-term benefits as it will provide participants with professional skills that they can use after the project ends, as well as adding to the development of tourism in the regions surrounding the castles.

The Culture Ministry will provide about €100,000 from its grant system to finance the project and will serve as its professional guarantor. A precondition for a castle to be included within the programme is for it to already be part of the activities of civic associations that deal with protection of monuments and for some protection work to have already been started in cooperation with local authorities.

Eva Chudinová, the spokesperson for the Culture Ministry, said that workshops take place at the castles during the summer focused on professional restoration or conservation of castle ruins, noting that this is done under the supervision of civic associations as well as under the expert supervision of regional monument protection offices.

“The unemployed can first perform easier work, such as cleaning, seeding green areas or manipulating materials, and can then gradually become acquainted with more demanding skills such as stonemasonry or carpentry,” Chudinová said.

Some observers warn against too much optimism and point to similar projects from the past that did not meet with much enthusiasm or success among the long-term unemployed. Psychologists have noted that after long periods of unemployment people’s working habits deteriorate and they may find it very hard to return to the labour market. This may explain the experience from a project that was launched by the Labour Ministry in 2010 after Slovakia was hit by massive floods. The ministry sought long-term unemployed persons to do work such as cleaning riverbeds and authorised 835 job positions in cooperation with the affected municipalities – but only 212 people took up the opportunity, the Sme daily reported, noting that earning the minimum wage of just over €300 per month was apparently insufficient motivation.

Lehocká said Slovakia’s current system of social allowances, and how they are distributed when someone participates in this kind of work, is at fault.

“Drawing social allowances is in some cases preferable to working,” Lehocká told The Slovak Spectator, explaining that receiving any paid income lowers the amount a person receives in social allowances.

How much those working on a castle reconstruction project would earn has not been announced but it is not likely to be much higher than the minimum wage. However, the chairman of the Freedom and Solidarity (SaS) party, Richard Sulík, announced that new legislation that is already under preparation could motivate long-term unemployed persons to seek work, mentioning the payroll-tax reform plan advanced by the government. He said even though the most comprehensive changes are planned for 2013, special rules could be designed even earlier for the castle reconstruction projects so that a person’s social allowances will depend on real work activity.

“It will not [continue to] work in the way that social allowances will be also for those who don’t want to work anymore,” Krajcer said, as quoted by the TASR newswire. “We are creating more space and possibilities so that people can deserve the allowance, or get money through the project.”

Unemployment statistics show that Slovakia’s unemployment rate reached a post-crisis high in February of 13.16 percent, up 0.18 percentage points compared to January. In human terms this meant that 395,445 people were registered as unemployed, according to data from ÚPSVaR released on March 21. The jobless rate in February 2011 also stood 0.19 percentage points higher than the same month in 2010 and marked the highest number of unemployed Slovaks since January 2005.

In addition, statistics from Eurostat indicate that Slovakia has the highest long-term unemployment rate in the EU. Eurostat wrote that in the third quarter of 2010, Slovaks who had been unemployed for a year or longer represented 9.4 percent of the labour force, compared to an EU average of 3.8 percent in that quarter. Labour market experts say those trapped in long-term unemployment are primarily persons with low levels of education and poor qualifications and note that these people may lose their working skills, habits and job knowledge and severely lessen their chances of finding work again.