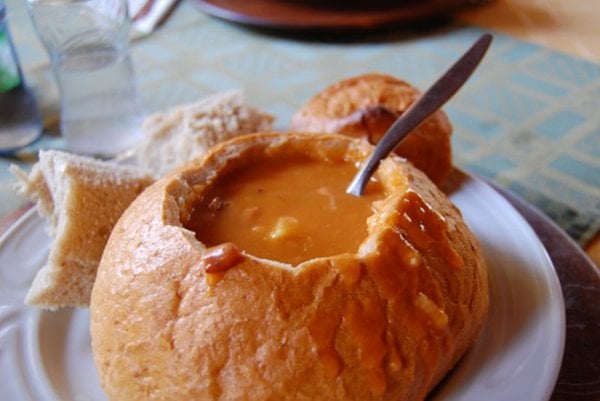 A brief guide to the country’s culinary highlights

Slovakia, unlike France or Italy, may not be on the list of top destinations for those who take pleasure in gastro-tourism. Nevertheless, Slovak cuisine, in which sheep-breeding traditions combine with tastes typical of Hungary or Austria, has a surprising amount to offer – particularly if you enjoy meat.

When asked what the most typical Slovak food is, every Slovak would first answer bryndzové halušky. The gnocchi-like dumplings made of potato dough served with bryndza, a traditional, strong-tasting Slovak sheep’s cheese, originate in the mountainous regions of northern and central Slovakia. They are served in practically every restaurant that offers local cuisine, usually seasoned with fried bacon or fried onions. An alternative, which is better known in several varieties as a Polish traditional dish, is bryndzové pirohy, ravioli-like pasta with a filling made of bryndza and potatoes.

Western Slovakia, however, has its own regional speciality: roasted goose accompanied with red cab-
bbage and lokše, a kind of dry potato pancake (resembling tortillas), smeared with goose fat (which is believed to be very healthy). Lokše can also be served as a main dish, filled with goose pate, or sweet, filled with poppyseed and jam.

Goose as a regional specialty is a tradition shared with Slovakia’s southern neighbour, Hungary, as is that of eating goulash, or guláš in Slovak. Typically eaten with knedľa, a kind of sliced, boiled and steamed dumpling, guláš takes several forms: traditional, spicy maďarský (Hungarian, with beef); segedínsky (creamy, with sour cabbage and pork); or poľovnícky (with deer meat). Apart from these, there is also kotlíkový guláš, which is more like goulash soup, served with bread.
Soups – polievky – generally cannot be absent from a Slovak table. The most frequently served soups are chicken bouillon (slepačí vývar), tomato (paradajková), vegetable (zeleninová) and various cream soups.

Faithful to the Austrian tradition, Slovaks are very keen on fried Wienerschnitzel (vyprážaný rezeň), which is a regular Sunday or festive lunch for many. It usually comes with either mayonnaise potato salad, or with boiled potatoes and pickles.

Vegetarians might find it rather harder to enjoy Slovak cuisine. The most likely dish on offer is vyprážaný syr, or fried cheese, a typical central European dish served with French fries and tartar sauce.

Another specialty which is hard to find elsewhere in the world is treska, a mayonnaise-fish salad, available in salad bars or supermarkets.

The most popular drink in pubs, however, is beer, or pivo. The most popular Slovak brands include Zlatý Bažant, Corgoň, and Šariš, but Czech beers too can normally be found among the selection at pubs. You can order a small beer (0.3l) or a big one (0.5l). The majority of Slovak pubs offer not only draught beer, but also draught Kofola, a cola-based soft drink, which was developed as an alternative to western competitors in the 1960s. Slovaks and Czechs like to call it the best product of the Cold War. Another such soft drink is Vinea, made from grape juice and available in white and red varieties.

Pubs in Slovakia usually offer an interesting selection of small snacks that go well with beer (and encourage further consumption thereof). An evening in a pub offers a chance to taste traditional Slovak cheese too, such as traditional korbáčiky, which are little whips made of spaghetti-shaped cheese, courtesy of the Orava region. Korbáčiky can be found in two versions – natural and smoked.
Slovak pubs have also adopted the traditional Czech beer snack, a pickled camembert-style cheese called nakladaný hermelín. If you are not much of a cheese lover, you can go for pagáč, a salty pastry made with pork fat and crackling.

Central European countries take pride in their tradition of sweet dishes, which are often served not only as desserts but also as main dishes. That is the case with slivkové gule, dumplings filled with plums seasoned with poppyseed or minced walnuts, but also crepes, or palacinky. Apart from that, Slovaks and Czechs share the tradition of buchty (buns) – both baked and steamed, and závin (turnover). Poppyseed is a typical seasoning or filling for these.

The traditional desserts include Austrian strudel (štrúdľa), but in Bratislava there is also the regional specialty bratislavské rožky, a fine, crescent-shaped pastry with a poppyseed or walnut filling and a glossy surface, which recently received recognition under the EU’s protected geographical status scheme.

Central European cities, from Vienna through Bratislava to Warsaw, are the places to go for those who like creamy cakes and cookies, served to accompany afternoon coffee.