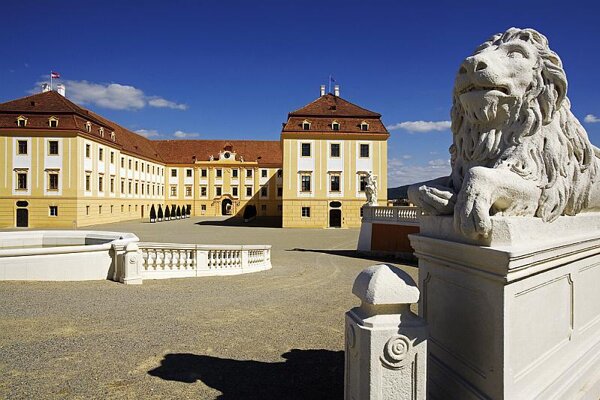 Červený Kameň Castle: www.hradcervenykamen.sk
Driving from Bratislava:Via 502; 37 km / 48 mins
Public transport: www.cp.sk
Bus: 1h 10 mins
The knight‘s banquet hall, a decorative Baroque chapel, a well-stocked library and a dining hall replete with crystal chandeliers are probably only to be expected. But the castle’s enormous cellars (the largest in central Europe) are likely to surprise even the most seasoned castle-goer. Originally constructed in the 13th century in the foothills of the Small Carpathians, it was later owned by the mining magnate Anton Fugger, who began its transformation into both an ‘ultimate fortress’ and a luxurious Renaissance residence. Later the Pálffy family continued to enhance the castle.

Fortress: www.komarno.sk
Driving from Bratislava: Via 63; 104 km / 1 h 45 mins
Public transport: www.cp.sk
Train: 2 h 15 mins;
Bus: 1 h 55 mins
The fortress in Komárno is a stark and magnificent example of military might – a structure of prodigious scale that has been strengthened and enlarged many times during its history. The fortress continued to be used almost to the day but it is now abandoned. Visitors can walk in and around what feels like a sprawling ghost city. Even the very knowledgeable guides say that some areas remain unexplored. Tunnels with entrances within the fortress may lead all the way under Komárno; no one has yet found out. Reservation for a visit outside regular opening hours is required.

Mansion:www.zamek-lednice.com
Driving from Bratislava: Via D2/E65; 91 km / 1 h 1 min
Public transport: www.cp.sk
Train + Bus: 1 h 21 mins
Lednice, together with its twin manor of Valtice, was inscribed on the UNESCO World Heritage List as “an exceptional example of the designed landscape that evolved in the Enlightenment.“ Lednice contains a Neo-Gothic palace, a historical greenhouse and the English garden park with a solitary 60-metre minaret, reputedly the tallest outside the Muslim world at the time of its construction. Valtice and its impressive Baroque residence host the 44th Valtice Wine Market, the largest and most prestigious exhibition of wine in the Czech Republic, May 6-8. The city of Mikulov, with several attractions, is also nearby.

Mansion: www.schlosshof.at
Driving from Bratislava: Via 61, B9 and B49 29 km / 33 mins
Just across the Slovak-Austrian border is a magnificent Baroque estate, Schlosshoff, consisting of a lordly palace, a terraced garden and an idyllic farm. The estate has been undergoing an extensive authentic renovation to restore the look that it had when it was owned by Empress Maria Theresa. Visitors to Schlosshof will have insight to everyday life of the imperial family in the 18th century.