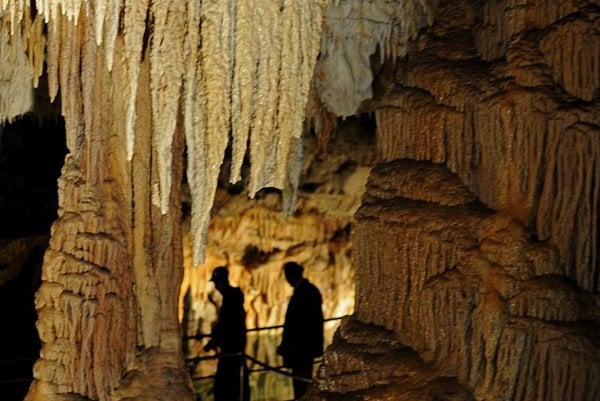 Caves in Slovakia (27 - 77 km) www.ssj.sk; www.krasnohorskajaskyna.sk
Driving from Košice: 27 - 77 km / 30 - 80 mins
Caves of Aggtelek Karst (58 km) www.anp.hu
Driving from Košice: 58 km / 56 mins
There are more than 5,000 caves in Slovakia, of which 15 are open to the public and six are recorded on the UNESCO World Heritage List as important natural monuments. The nation‘s most famous caves lie in a 500-square-kilometre natural reserve west of Košice known as the Slovak Karst (Slovenský kras), with the most famous and spectacular cave system being Domica/Baradla, a vast network of tunnels and voids that crosses underground into Hungary, where the region is referred to as the Aggtelek Karst. The Hungarian part of the cave is known as Baradla, but the Slovak side, Domica, is by itself five kilometres long, of which 1.3 kilometres is accessible to the public. Part of the tour (providing conditions are good) consists of a short ride on a small raft.
The Ochtinská aragonitová jaskyňa has spiky aragonite formations that resemble massive flowers. Gombasecká jaskyňa has quill-like formations that span up to three metres.

Jasovská jaskyňa, in Jasov, has lovely stalactite “forests“ and pagoda-shaped stalagmites. The Krásnohorská cave near Krásna Hôrka Castle is open to the public seven days a week. In the cave, you are kitted out with a boiler suit, boots, hard-hat and lamp and also required to sign a personal injury waiver. An experienced guide will accompany you. The Guinness Book of Records lists the Krásnohorská stalagmite as the largest in the world.

Mountain: www.tatry.sk
Driving from Košice: Via routes 547 and 536 115 km / 1 h 54 mins;
Public transport: www.cp.sk
Train: 1 h 46 mins;
Train + Bus: 1 h 45 mins
The High Tatras mountain range, which separates Slovakia from Poland in the north of the country, offers some of the most attractive sights in Europe. It is easily accessible for walkers and admirers riding mainline trains running through Poprad. Poprad also has a light rail link to the High Tatras villages.

Tackling the highest and most daunting peaks is probably best left to committed climbers, for whom a range of specialist hiking literature is available, while others can consider visiting some of the numerous mountain chalets in the range.

For those of a more relaxed persuasion a cable car goes right to the top of the second-highest peak in the range, Lomnický štít (2,632 metres). This starts as a large ski lift from the village of Tatranská Lomnica, then continues via a smaller cable car from Skalnaté pleso all the way to the very top. However, there are also various other attractions available, such as bobsleigh, bowling, golf, mountain scooters, horse riding, three-wheeled cars, paintballing and summer tubing.

Nearby is the popular Aquacity resort in Poprad (www.aquacity.sk) which offers a combination of heated and unheated pools, water slides, saunas, whirlpools, fitness and ‘wellness’ services, as well as food and drink.