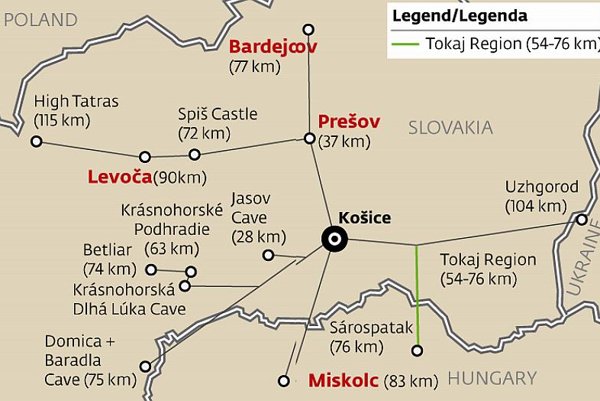 City: www.bardejov.sk
Driving from Košice: Via E50 and route 545 77 km / 1 h 15 mins
Public transport: www.cp.sk
Train: 2 h 25 mins
Bus: 1 h 52 mins
Much of the credit for Bardejov’s appeal undoubtedly belongs to Saxon weavers, who first made Bardejov their base in the 12th century, and their descendants, who designed the spectacular central marketplace to parade their wares. In 1986 Bardejov earned a gold medal from UNESCO for the rescue and restoration of its monuments, and in 2001 the arbiters of world culture went a step further and included the entire town on their official heritage list.

City: www.levoca.sk
Driving from Košice: Via E50, 90 km / 1 h 23 mins
Public transport: www.cp.sk
Bus: 2 h
The reason people go to Levoča is to see the works of its most famous local: Master Pavol, the medieval artist who carved some of the best-known Gothic altars in the country. The central town square is named after him and a museum celebrating his work is housed in his former home and workplace. His masterpiece is the 18.6-metre-high gothic altar in Levoča’s Sv. Jakub (St. James) church, the highest altar of its kind in the world. It’s so famous, one of its central figures – a statue of the Madonna – was pictured on Slovakia’s 100-crown bills before the currency was exchanged for the euro. The historical city centre is listed as a World Heritage Site by UNESCO.

City, spa, castle: www.1hungary.com
Driving from Košice: Via E71, 83 km / 1 h 27 mins
Public transport: www.cp.sk
Two trains daily: 1h 20mins
Miskolc is Hungary’s third largest city with a charming downtown, a Gothic church in the Avas hills and a Greek Orthodox church with the largest iconostasis in central Europe. Miskolc-Tapolca, a 30-minute bus ride from Miskolc, offers a thermal bath in a natural cave, along with a rock chapel in a cave and an adventure park for both kids and adults. The spa has been renowned for its therapeutic effects since the 16th century.

City: www.presov.sk
Driving from Košice: Via E50, 37 km / 36 mins
Public transport: www.cp.sk
Train: 43 mins, Bus: 35 mins
Prešov is big by local standards: the third largest city in Slovakia, with almost 100,000 people. Prešov and the region around, Šariš, used to be–and to some extent still remain–multicultural: the city centre and its sights are the heritage of the Slovak, Hungarian, German, Ruthenian and Jewish inhabitants of the city. Prešov’s Main Square is ‘lenticular’ (lens-shaped), a style typical of several eastern Slovak cities. Wine fans can enjoy the city’s Wine Museum, which is housed in ancient two-storey cellars near Prešov Town Hall. Prešov is inseparably connected with salt mining. In the district of Solivar, you can learn more about this at the Salt Mine Museum.