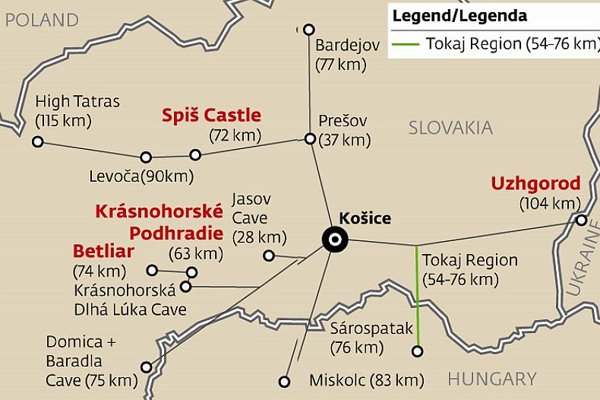 Mansion: www.betliar.eu
Driving from Košice: Via E58; 74 km / 1 h 8 mins
Public transport: www.cp.sk
Bus: 1 h 40 mins
The Betliar mansion is, like Krásna Hôrka, another Andrássy family property in the Rožňava region. It was utilised by one branch of the family as a hunting lodge and repository for the various artefacts they acquired while travelling the world. Hunting weaponry, medals, furniture and art are all to be expected, but they share the space with Buddhas, samurai warriors, Eskimo outfits, the freakish head/trunk/ears combo of an elephant (feet and legs available separately), and an Egyptian mummy.

Castle: www.hradkrasnahorka.sk
Driving from Košice: Via E58; 63 km / 58 mins
Public transport: www.cp.sk
Bus: 1 h 18 mins (to Krásnohorské Podhradie)
Visible from afar, Krásna Hôrka looms into sight on a limestone hillock, above the village of Krásnohorské Podhradie. The castle was built in the 13th century to defend the trade route across this part of the country and there are some exemplary views over the Gemer region from within its walls. Part of the exhibition is given over to displays of brutal wartime weaponry and armour, as well as torture equipment, and the castle is something of a one-stop-shop for an insight into the region’s feudal violence, medieval living, and, for the lucky ones, limitless affluence.

Castle: www.spisskyhrad.sk/en
Driving from Košice: Via E50 and route 18; 72 km / 1 h 11 mins
Public transport: www.cp.sk
Bus: 95 mins (to Spiš. Podhradie)
The historical centre of power in the historical Spiš region, Spiš Castle it is one of the biggest fortresses in central Europe and includes defences covering four hectares which were added over successive centuries of improvement and rebuilding. It fell into disrepair after the religious conflicts of the 1700s but its ruins, and the settlements that surround it, are now listed as a World Heritage Site by UNESCO. One of those settlements, Spišská Kapitula, is Slovakia’s answer to the Vatican: a small, walled town that is mostly owned and operated by various branches of the Roman Catholic church.

Castle, city: http://ukrainetrek.com
Driving from Košice: Via route 552; 104km / 1h 52 mins
(Note: As Ukraine is not in the Schengen zone queues at the border are notorious.)
Uzhgorod is not an obvious choice for a daytrip from Košice, but it offers visitors a unique atmosphere. Some buildings in Uzhgorod have a familiar
pre-1918, Habsburg appear-
ance, but many are in a ruinous condition. The centre of town has a pleasant riverside position, something which a number of outdoor bars take advantage of during the summer. One of the town’s best-preserved buildings is the seventeenth-century Greek Catholic cathedral, and the town’s castle, on a volcanic hill close to the centre, is also popular and features an historical exhibition.