‘No one’ leads in poll of trustworthiness

“POLITICIANS are working very intensively on losing trust among the people,” said political analyst Miroslav Kusý in his comments on a recent survey which showed that more than one third of Slovak citizens do not trust any of the politicians on the Slovak political scene. In fact, the numbers suggest that distrust exists on both sides, among ruling coalition and opposition supporters alike. 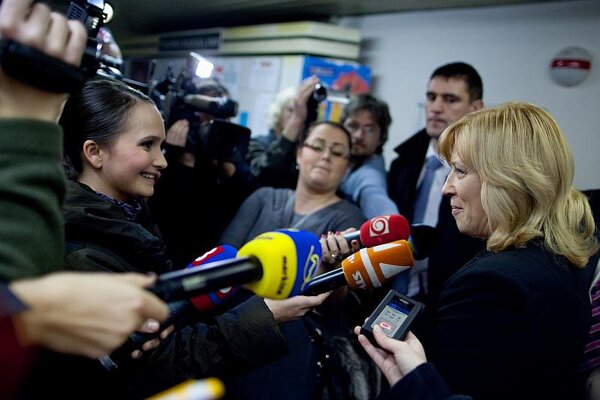 “POLITICIANS are working very intensively on losing trust among the people,” said political analyst Miroslav Kusý in his comments on a recent survey which showed that more than one third of Slovak citizens do not trust any of the politicians on the Slovak political scene. In fact, the numbers suggest that distrust exists on both sides, among ruling coalition and opposition supporters alike.

The ranking of politicians, based on a survey conducted by the Institute for Public Affairs (IVO) in the first week of March 2010, changed significantly from a similar survey carried out in February 2010. Perhaps most significantly, the highest percentage of respondents did not express trust in former prime minister and opposition Smer party leader Robert Fico, who led the previous poll. Instead, a plurality, 37 percent, said they trust nobody on the Slovak political scene, a steep rise from 24 percent a year ago. The authors reporting on the survey, Zora Bútorová and Oľga Gyarfášová of IVO, explained the increase by pointing to an overall change in the country’s political climate: the pre-election mobilisation of early 2010 was replaced by a decrease in interest in politics and disappointment about recent political developments, they suggested.

Kusý agreed that politicians very cynically have forgotten about their pre-election promises and have been surrounded by scandals that add to their falling trustworthiness. Another aspect that he said plays a part in lowering trust in politicians is that they hurl blame at each other publicly, through the media, “and the voter is open to accept their mutual invectives as true from both sides”.

Fico still the most trusted

The overall decrease in the perceived trustworthiness of politicians was reflected in the numbers for most of those who appeared in the ranking, composed by the IVO analysts from the results of a survey in which respondents were asked to name no more than three politicians they trust.

Fico remained the most trusted politician, although the number of people who trusted him dropped from 31 percent in 2010 to only 23 percent in March 2011. He is followed by the current prime minister, Iveta Radičová, who had the trust of 17 percent of the respondents. Smer’s deputy chairman and former interior minister under Fico, Robert Kaliňák, ranked third, with 9 percent of respondents saying they trust him (as opposed to the 16 percent he received a year ago).

According to political analyst Juraj Marušiak of the Institute of Political Sciences of the Slovak Academy of Sciences, one of the reasons for Fico’s decline in popularity might be the fact that he and his party have been critical of the anti-corruption measures passed by the current government, such as the requirement to publish all state contracts online, and have opposed limiting the immunity of MPs.

“Meanwhile, neither Smer nor its leader offers any positive alternative, which in the end leads to a kind of fatigue among his voters,” Marušiak told The Slovak Spectator.

Slovak President Ivan Gašparovič came in fourth, with 8 percent of respondents saying they trusted him, four percentage points down from 2010.

Most leading politicians in the ruling coalition parties saw voters’ trust in them drop, according to the results of the IVO survey. The leader of Most-Híd, Béla Bugár, who ranked fifth with 7 percent of people trusting him, and Christian Democratic Movement (KDH) leader Ján Figeľ, tenth with 3 percent, both received four percentage points less than in February 2010. Mikuláš Dzurinda, the leader of the Slovak Democratic and Christian Union (SDKÚ) and Daniel Lipšic of KDH also dropped to 3 percent in 2011.

Only Ivan Mikloš of the SDKÚ and Richard Sulík, the leader of Freedom and Solidarity (SaS) kept their scores from 2010. Mikloš ranked sixth, with 6 percent, and Sulík ended eighth, with 3 percent of respondents saying they trusted him.

Radičová adds to her trustworthiness

Prime Minister Iveta Radičová was the only prominent politician to see her trustworthiness rise from last year, since in February 2010 she was trusted by 14 percent of the respondents.


Marušiak suggested that this might also be because Radičová is still seen by the public as a new face in Slovak politics and her name is not connected with the previous establishment and its past political and corruption controversies.

“Either knowingly or unwittingly she has accepted the role of the good-news messenger,” Marušiak said, explaining that Radičová is critical of some measures of the ruling coalition when it comes to their adverse social consequences, something which helps her popularity even on the frequent occasions when she is not able to push through a concrete result. Marušiak noted that the prime minister is also often critical towards political controversies within the ruling coalition,and is willing to enter into conflicts with other coalition politicians, even those within her own party.

In fact, Radičová also represented the only exception to the rule that the leaders of political parties were the most trusted politicians within their respective parties. The majority – 65 percent – of SDKÚ supporters saw her as the most trustworthy politician in her party, while Dzurinda, the chairman, ranked only third (on 17 percent), after deputy leader Mikloš (32 percent).

The poll was carried out before Fico broke the scandal about the Tax Directorate building lease, which prompted several questions about Radičová’s independence and the strength of her position within the SDKÚ.

According to Kusý, the recent developments might even have strengthened her position, because in the end she came out of the controversy the winner.

“There is this strong feeling of wrongdoing that the public is so sensitive to,” Kusý told The Slovak Spectator. “Mikloš and Dzurinda wanted to face her with a ready-made partisan decision, but it turned into her advantage. Although hers wasn’t a clear decision that she would claim from the very beginning, she reached it gradually – [realising] that she needed to act decisively. And that turned out to be a factor in her success.”

According to the survey, Radičová is not only number one among supporters of her own party. She is also the second most trusted politician in the eyes of the supporters of all the other ruling coalition parties – her popularity thus extends well beyond the SDKÚ electorate.

The trustworthiness of politicians as perceived by supporters of their respective parties has also dropped significantly in comparison with 2010. The largest portions of respondents who said they do not trust any politician were found among those who voted for SaS and Smer (both 29 percent) and the KDH (27 percent). Trust in specific leaders of political parties has declined too, particularly in the case of Smer, where only 57 percent of the party’s supporters said they trusted Robert Fico, compared with 83 percent in 2010. It was a similar tale for Most-Híd, whose leader Béla Bugár was trusted by 54 percent of the party’s supporters in March 2011, as opposed to 81 percent in February 2010.