A SLOVAK university team of robotics experts repeated a previous victory and claimed another gold medal at the Robotchallenge international competition held in Vienna, Richard Balogh of the Slovak University of Technology in Bratislava (STU) told the TASR newswire. 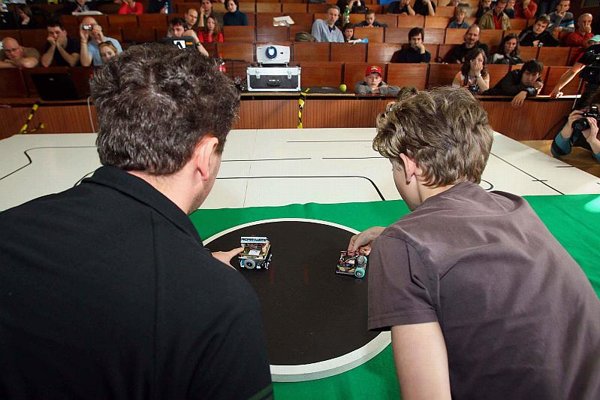 A SLOVAK university team of robotics experts repeated a previous victory and claimed another gold medal at the Robotchallenge international competition held in Vienna, Richard Balogh of the Slovak University of Technology in Bratislava (STU) told the TASR newswire.

Jozef Škultéty, Michal Beňo, Ján Maláč and Peter Mihál were the designers of the winning robot, called J2MP 99, that beat competitors from across Europe. “They managed to beat their competitors again in the most demanding discipline – in ‘Puck Collect’,” Balogh said.

This year the winning Slovak team re-designed mechanical aspects of their robot, using more effective motors and replacing some plastic parts with metal ones. “The robot became much faster and it was generally more resistant to hits by rivals,” said Škultéty, one of the designers and a graduate from STU’s Faculty of Electrical Engineering and Information Technology.

In a new category called LegoSumo, students from a secondary school in Liptovský Mikuláš placed first and second.

“Their robots managed to push robotic wrestlers from Britain, Ireland and Romania out of the ring,” Balogh reported. A final medal brought home to Slovakia was captured by Ján Bačík of the Prometheus project for autonomous control of model helicopters. Slovaks placed second in the overall competition behind teams from Poland.

The eighth year of the Robotchallenge competition was held over the last weekend of March at the Austrian Academy of Sciences and Slovak-designed robots competed in several categories including ‘Driving the Line’, the LegoSumo contest as well as in puck collecting. More than 1,000 robots were involved in the competition.