THE FIRST days of May saw significant changes in passenger railway transport in Slovakia. Following the adoption of an extensive revitalisation plan earlier this year, the national passenger railway company, Železničná Spoločnosť Slovensko (ZSSK), launched reduced train schedules as of May 1, though the cuts were not as extensive as originally planned. These will not be the only reductions: ZSSK has announced that more will follow in December this year and in March 2012. 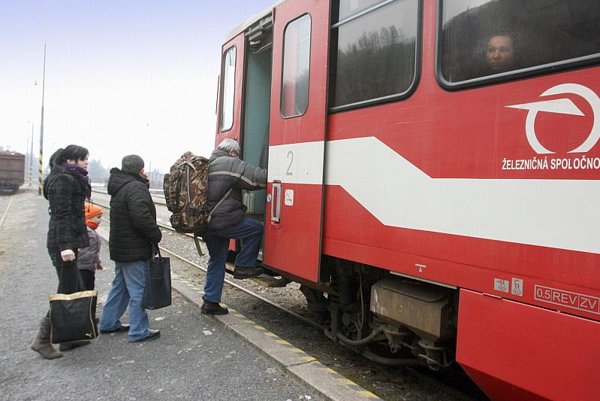 Passenger rail services were cut in Slovakia on May 1. (Source: Sme)
Font size:A-|A+0

THE FIRST days of May saw significant changes in passenger railway transport in Slovakia. Following the adoption of an extensive revitalisation plan earlier this year, the national passenger railway company, Železničná Spoločnosť Slovensko (ZSSK), launched reduced train schedules as of May 1, though the cuts were not as extensive as originally planned. These will not be the only reductions: ZSSK has announced that more will follow in December this year and in March 2012.

“The actual reduction was 50 percent of the original plan and its effectiveness was delayed after Prime Minister Iveta Radičová entered the process,” ZSSK spokesperson Alexander Buzinkay told The Slovak Spectator, adding that the railway transport reduction had been turned into a political issue. Negative reactions from municipalities and regional administration had led ZSSK to soften the cuts, he said.

The changes, which came into effect as of May 1, affect over 300 routes, the Sme daily wrote. ZSSK has either shortened lines or reduced the frequency of trains on them.

The greatest number of cuts took place in Trenčín, Košice and Banská Bystrica Regions. Bratislava Region was least affected, according to Buzinkay.

Some regional trains were cancelled, leaving only express trains. Passenger services on five lines were withdrawn, of which four were in border regions.

ZSSK said it had cut the least-used lines which were generating the greatest losses. Buzinkay cited services between Fiľakovo and the border with Hungary as an example, saying that the costs of operating this route were more than 100 times higher than income from fares. He added that the reductions affected routes where a bus transport alternative exists. Where there was no such alternative, i.e. where people have no other means of public transport, ZSSK has maintained train services.

ZSSK reduced services partly because it is now receiving less money from the state budget to provide transport services in the public interest, as well as to find solutions to its loss-making operations. It said that when deciding on reductions, it took into consideration the economic efficiency of individual lines, the number of passengers on them, as well as the need to maintain necessary public transport routes.

ZSSK discussed the reduction in train services with regions and municipalities, and said it received mostly negative responses. Apart from reducing services, ZSSK also plans to raise fares by 5 percent on average as of August this year, and do the same in the following two years. The company has not confirmed the exact extent of fare rises yet, the SITA newswire reported.

The railway operator is also reducing its labour force. In total it plans to lay off 621 employees out of a total labour force of 5,000 over three years, according to the revitalisation plan.

The delayed adoption of the plan and the lower-than-planned reduction in service means that ZSSK has not fully observed its scheme to cut staff. Pavel Kravec, ZSSK’s director general, told the Pravda daily that the company is now cancelling 322 positions, of which 170 were already vacant. Of the remainder, 80 people will get scheduled or early retirement and 70 people will lose their jobs.

Kravec added that in December ZSSK will reduce passenger services by an additional 0.5 million kilometres annually, and by another 0.3 million kilometres in March 2012. He did not specify which routes would be affected, but part of the cuts will coincide with the introduction of a new route by private railway operator RegioJet in southern Slovakia from March 2012.

In Slovakia mass public transport is provided by the state-owned ZSSK and by regional bus companies. The latter have been partly privatised, with the National Property Fund remaining the part-owner, but the government of Iveta Radičová is pondering privatisation of the remaining stakes. The state subsidises mass public transport either by rail or road. To get a proper picture of how effectively this support – either from the state budget or from the budgets of regional governments – is used, the Ministry of Transport, Construction and Regional Development has ordered an analysis from the Žilina-based Transport Research Institute (VÚD). This is intended to give a picture about passenger flows on both trains and buses.

Originally, VÚD was supposed to deliver the analysis by the end of April. But after bus companies and regional governments refused to give VÚD the necessary information, the deadline was extended.

VÚD director Ľubomír Palčák, in comments to The Slovak Spectator, said his impression of the current state of public mass transport is that instead of coordinated and integrated operation of railway and bus transport systems, the two operate in competition. He based his observations on VÚD’s initial findings. His institute has already mapped out railway transport flows but has had problems doing the same for bus transport.

“SAD companies [operators of public scheduled bus transport], as private companies, do not want to provide us with data about their passenger numbers, and self-governing regions claim that the contracts they have signed with SAD companies prevent them from providing information to third parties,” said Palčák.

VÚD has obtained data about bus transport only in Žilina Region. Based on these, only 22 percent of passenger rail capacity in the region (before this month’s changes) was used; in the case of bus transport the figure was 33 percent.

“Even though nobody expects these to be used at 100 percent, these are still low numbers,” said Palčák, who said he welcomes efforts to better coordinate bus and train lines in order to prevent overlap and for them to act in a coordinated way, rather than as rivals. He said he would also welcome it if more passengers moved from cars onto trains and buses and thus reduced road traffic.

In April, RegioJet, a subsidiary of the Czech firm Student Agency, showed Slovak travellers what they can expect when it officially starts operation on the Bratislava-Komárno route next March.

Regiojet will operate the route with the help of a state subsidy. Slovakia will pay it approximately €7.1 million per year for operation of the route, about €1.3 million less than ZSSK currently receives, according to Sme.

While people who took part in the April trial welcomed the comfort of the train, they expressed concern about fares. RegioJet promises that the ordinary fare should be no higher than that now charged by ZSSK.