KLEZMER, the traditional eastern European Jewish, prevailingly instrumental, style of music, is quite well known and accepted in Slovakia, as it was once part of the local musical scene. It has recently enjoyed a revival in interest thanks to the Pressburger Klezmer Band. Now and then, the troupe invites other musicians, foreign as well as local, to join it. 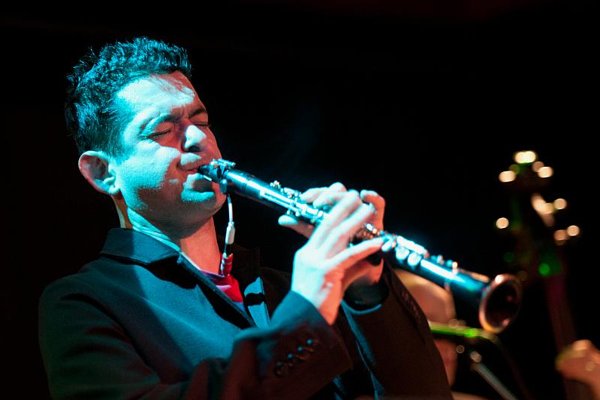 KLEZMER, the traditional eastern European Jewish, prevailingly instrumental, style of music, is quite well known and accepted in Slovakia, as it was once part of the local musical scene. It has recently enjoyed a revival in interest thanks to the Pressburger Klezmer Band. Now and then, the troupe invites other musicians, foreign as well as local, to join it.

The group also includes short lessons in Jewish-style dance in its performances. On April 9, at Klub Za Zrkadlom, British clarinettist, multi-instrumentalist and composer Merlin Shepherd briefly joined their ranks and offered a joint performance. In summer, he should return to Slovakia to the renowned Pohoda open-air music festival. Merlin Shepherd has played with numerous musicians and groups from all over the world, has two bands that carry his name (Merlin Shepherd Kapelye and Merlin Shepherd Quartet) and, together with his wife Polina, has undertaken the task of restoring the background sound-track and original style of music to accompany silent movies via the Light and Sound Cinematic Duo. After the Bratislava concert, The Slovak Spectator spoke with Merlin Shepherd about his music.

The Slovak Spectator (TSS): What was your route to klezmer music?
Merlin Shepherd (MS): I started my musical life when I was four years old and I was taught the block flute recorder which is what children very often start with. And when I was seven years old, I wanted to play the clarinet. I heard it because my dad is a great fan of classical music, and I loved it. They got some advice through the teacher of my eldest brother, who said that the clarinet was too heavy and that my teeth would not be fully formed, because the mouthpiece was too hard for a seven-year-old child. He recommended I started with the flute and, if I persevered, I could move on to the clarinet. So I started playing flute, although it was not my preferred instrument. By thirteen I did all the flute grades and I was very good at it; I played in the National Youth Orchestra, leading the flute section. But at that time I stopped enjoying playing flute; which is normal at that age. Either you grow with the music, or you pick rock guitar – which is what I did. I taught myself guitar, mandolin, and when I was nineteen, I decided I wanted to play saxophone. I played tenor sax at first, and then soprano. At college I studied saxophone as my first instrument. Then I got a job playing sax for a show at the National Theatre in London, and at that time I was probably twenty-six. After this job finished, I got another job at the National Theatre. The composer was an old friend who I had worked with years before and he wanted me to be the music director of the show, but he needed me to play clarinet. I agreed and we had some ten weeks of rehearsal, so I bought myself a clarinet and practised whenever possible. As soon as I got the clarinet, I thought: “This is what I wanted to do, and now I’ve been offered a job doing it.” By the end of those ten weeks I could play the clarinet. And I’ve been looking for all different kinds of music. Even when still playing sax, I tried many musical styles, including jazz, exploratory experimental music, and I was searching for the kind of music which would really speak to me – it definitely wasn’t classical flute, and it wasn’t jazz sax. And then I heard some klezmer on the radio and I thought “Well, I am Jewish, my family is from eastern Europe – this is what I should be doing.” It immediately spoke to me and I started doing it, copied every recording I was able to find, listening to it, and making it my own. It makes sense to play music that comes from my own culture. The way to klezmer clarinet was a big circle, but that’s OK, because I learned a lot of other things on the way. But I don’t just play klezmer, I also play some eastern styles: Turkish, Greek, I play some Serbian, Macedonian.

TSS: How did you come to play with Pressburger Klezmer Band?
MS: We had a gig with Frank [London’s] band, with the Brass All-Stars in Slovakia, about nine years ago. First they played, then it was our turn, and then we all played together. We have stayed in touch ever since. Whenever we come to Vienna or Prague, they come and listen to us. We just stayed friends. The klezmer community, the international world of klezmer, is very small. Most people playing klezmer – it’s like six degrees of separation. You always know somebody who has been in every band, you get to know people in festivals, when touring...

When people meet a musician, they often ask: “What do you play?” And I say “Music”. Actually, it’s not about the instrument, it’s about music. You can have music, develop technique, and specific skills for a specific set of muscles, but if you don’t have music inside you, it does not matter how many muscles you develop, it won’t work. So it’s actually about playing music. Most really good musicians can play other instruments – apart from their “main one” – as well. Because they are not playing instruments, they are playing music. Even if they don’t play them perfectly, they can make a coherent tune. I can, for example, play bass or guitar and I can accompany klezmer without thinking about it. I am not a great guitarist, and I am certainly not a great bassist, but I can manage. I know the music, I know the chords, and I have the basic technique. I enjoy it almost as much as playing clarinet.

TSS: It seems that clarinet is decisive for the mood and atmosphere of klezmer.
MS: I am not sure I agree. Clarinet has only been used in klezmer music for about 150 years; and as klezmer is probably 500 years old, if not older, this is really a short period. Until about 1860 it was forbidden for Jews to play loud instruments. They played classical music, but not their own music on their own, loud instruments. That meant clarinet, that meant brass, that meant percussion. So they were confined to play cymbalo, cello, violin, flute; no drums, no clarinet. And I think it was Tsar Alexander who emancipated Jews, allowing them to play loud instruments. So clarinet only became evolved in klezmer music in approximately 1860. And now it has become the very sound of klezmer – but before that, it was the violin. You can get as much expression from a violin, easily, as you get from a clarinet; it is just that a clarinet is louder. And when it came to recording, in the early days the clarinet was an easier instrument to record, because it was louder. Klezmer is essentially wedding music – and weddings were mostly held outdoors, and so 150 years ago, when clarinet was allowed, if you imagine 200 people dancing outdoors, it was an easier instrument to carry the sound. So clarinet took over from violin, although it’s not a better instrument.

TSS: How did you find the Bratislava audience?
MS: Very responsive. I only wished more people had danced. But those who danced, danced for quite a long time – half an hour maybe, or even more. Samo (Alexander, a member of the PKB) wrote me an email worrying about whether there would be enough pieces for a concert maybe of an hour and a quarter or so. And it ended up being an hour and 45 minutes which is long enough, for me.