IN ONE of Slovakia’s more bizarre criminal cases, Slovak police foiled a case of what they said was attempted cannibalism on May 10. An undercover team swooped near Kysak, a village in the vicinity of Košice, after learning that a local man was planning to kill and eat a Swiss citizen with whom he made an online pact. The police operation was not a complete success: the suspect was armed and both he and a police officer were seriously injured in the ensuing shoot-out. The suspect died of his injuries two days later. 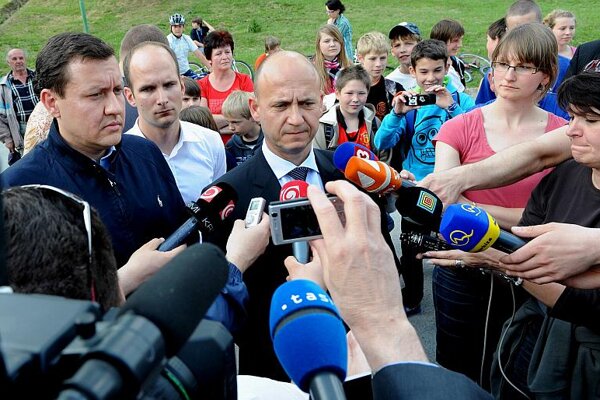 IN ONE of Slovakia’s more bizarre criminal cases, Slovak police foiled a case of what they said was attempted cannibalism on May 10. An undercover team swooped near Kysak, a village in the vicinity of Košice, after learning that a local man was planning to kill and eat a Swiss citizen with whom he made an online pact. The police operation was not a complete success: the suspect was armed and both he and a police officer were seriously injured in the ensuing shoot-out. The suspect died of his injuries two days later.

Slovak police were notified about the planned cannibalism by Interpol. The Swiss man, who had expressed a desire to be killed and subsequently eaten, found a willing accomplice in Slovakia through the internet and arranged a meeting to carry out the plan, but lost his nerve shortly before travelling and reported the plan to Swiss police.

Police officers then tracked the e-mail communication between the would-be human flesh-eater and the Swiss man.

“He [the Swiss citizen] wanted to die, and agreed to have his body quartered and subsequently consumed by a person whose identity we did not know,” Interior Minister Daniel Lipšic told journalists at a briefing at the crime scene, as quoted by the TASR newswire.

According to the president of the Police Corps, Jaroslav Spišiak, the Swiss agreed to be killed in woodland. The would-be cannibal was supposed to drug him, stab him in the heart and then quarter him. His remains were to be hidden – laced with pepper in order to mask the scent and prevent animals from finding the body – and subsequently eaten over a period of time.

The expected victim was supposed to arrive in Kysak by train, wearing clothes previously agreed on with his intended killer.

Slovak police swapped the Swiss man for an agent, who then went to meet the suspect near Kysak on May 10, as agreed. The agent carried a transmitter to allow other officers to track him.

“As soon as we verified that it was the suspect, the police intervened,” Spišiak told journalists, as quoted by the Sme daily

The shoot-out occurred when a police SWAT team attempted to arrest the suspect. The man, who possesses four legally-held firearms, pulled out a gun and threatened to shoot the agent; in response police snipers opened fire, hitting him several times. Despite his injuries, he returned fire and managed to shoot one of the SWAT unit members before being subdued.

“He [the policeman] was shot from the side, in an unprotected area; the bullet entered through his shoulder into the thoracic cavity,” Lipšic said, as quoted by Sme. He praised the officer for risking his life.

Both the policeman and the suspect were taken to the Louis Pasteur Hospital in Košice.

The 37-year-old officer’s condition had stabilised by the evening of the shooting, although he was reported to be in a critical condition. According to hospital spokesperson Jaroslava Oravcová, his injuries required urgent surgery and he was later placed in the department of anaesthesiology and intensive medicine.

The 43-year-old suspect was shot five times, suffering wounds to several internal organs, as well as to his arms and face. After being admitted to hospital he underwent five hours of surgery but died of his injuries on May 12.

The police were not able to interrogate the suspect due to his serious condition. The only information that was confirmed by Minister Lipšic was that he was a man from a nearby village.

The day after the incident local media reported that the suspect was Matej Č., an IT expert who had recently lost his job. He had two children and lived with his family in a new house in Sokoľ, a village near Kysak.

The Sme daily described him as a blogger who was critical of materialism and a lack of values in society, and that he was an active sport shooter who had even competed in the Slovak national championships.

People from the surrounding villages confirmed to the media that they had seen police helicopters circling the location in the morning and then heard shooting at around 10:00.

When asked whether the suspect had already committed any similar crimes before or whether this was the first time he had attempted to kill and eat anybody, Lipšic did not answer.

Upon his arrest, the cannibal-manqué was reportedly found to be carrying pills to drug the victim, knives, plastic bags and black pepper to sprinkle on the body in order to prevent wild animals from eating it while it was hidden in the forest.

In the aftermath of the incident Lipšic again mentioned the law on firearms, which was recently amended – among other things, to now include psychological tests for gun ownership –after a lone shooter killed seven people then himself in an incident in Devínska Nová Ves in August last year.

Lipšic said the case of the cannibal from eastern Slovakia proved that it is important to require such tests for firearms-licence applicants, Sme reported. He said that if there was scope to make the law stricter, he would do so.