Slovakia ranked near bottom on migration

BUREAUCRATIC barriers, language problems and a discriminatory labour market: these are only a few of the difficulties that migrants experience to some extent anywhere in the world. In Slovakia, however, these barriers tend to be worse than almost everywhere else in Europe or North America, with expert observers saying this is because elected officials and policymakers do not consider migration an important or pressing topic. 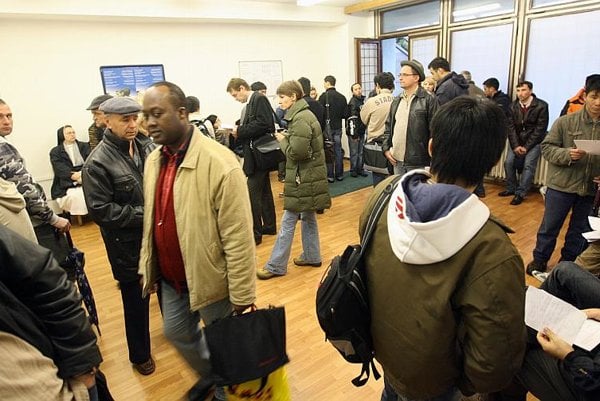 BUREAUCRATIC barriers, language problems and a discriminatory labour market: these are only a few of the difficulties that migrants experience to some extent anywhere in the world. In Slovakia, however, these barriers tend to be worse than almost everywhere else in Europe or North America, with expert observers saying this is because elected officials and policymakers do not consider migration an important or pressing topic.

Slovakia ranked third from the bottom among 31 countries evaluated in the recently published Migration Integration Policy Index (MIPEX III), with only Cyprus and Latvia getting worse results. The MIPEX III report stated that Slovakia had not made much progress in improving its migration policies and newcomers to the country experience weak and incoherent practices. The MIPEX project is led by the British Council and the Migration Policy Group, made up of 37 national-level organisations, including think-tanks, NGOs, universities, foundations, research institutes and equality bodies.

Laco Oravec of the Milan Šimečka Foundation noted that the fact that 28 out of 31 countries are doing better in their integration and migration policies than Slovakia is a warning sign, adding that Slovakia does not have a clear picture of its basic values and orientation regarding migration and integration of newcomers.

“That is why the existing policies are quite minimalistic, or beginner-like, because nobody has ever said here [in Slovakia] how we want to treat incoming foreigners in the future,” Oravec told The Slovak Spectator.

It is a fact that Slovakia has one of the EU’s smallest foreign-born populations, with only about 1 percent of the population consisting of foreigners in 2009, according to MIPEX, and that is at least one of the reasons that migration is not a pressing political issue. The report stated that Slovakia was one of the last EU countries to adopt an integration concept, doing so only in May 2009.

Oravec noted that the lack of interest in migration and integration policies is common across the political spectrum and for that reason the general direction of state policy has not changed with different governments.

“It would seem more legitimate to me if some politicians said that [the country’s integration policy] should be restrictive and selective,” Oravec said. “But there is no clear decision about that; no clear direction has been set. And that is why the migration office can promote a rather restrictive approach and put issues of security and border controls over issues of respect for human dignity, solidarity and social cohesion in society.”

Zuzana Števulová of the Human Rights League (HRL) agreed with Oravec and said in an interview with The Slovak Spectator that policymakers show only very little or almost no interest in the topic of migration, adding that Slovakia is a country with only a very short history of incoming immigration.

“The concept of integration had been passed but no financial resources were assigned to it and the responsible government departments weren’t assigned specific tasks,” Števulová said.

According to a report discussed by the Slovak cabinet on May 11, the number of foreigners requesting international protection in the country has been dropping since 2005 and other migration to Slovakia has been at a stable level. But the SITA newswire reported that this might change due to current political developments and the worsening security situations in North Africa and the Middle East.

Slovakia’s Interior Minister, Daniel Lipšic, is soon expected to submit a draft policy statement for the country with an outlook to 2020, as he was tasked to do so at a cabinet session in early February.

Who migrates to Slovakia?

The number of legal migrants living in Slovakia was estimated to be slightly over 19,000 according to a study entitled Economic Aspects of Migration and Integration of Migrants from Third Countries in Slovakia that was prepared by the Institute for Public Affairs (IVO). The study stated that the group of migrants is not homogenous even though it is quite small.

The vast majority of migrants arriving in Slovakia reported that they had left their homeland for economic reasons, with 42 percent of those surveyed stating unfavourable economic conditions and 32 percent stating low living standards as their reasons for migrating, IVO wrote.

Two thirds of the surveyed migrants said they intentionally chose Slovakia and they did not perceive it as a transit country or an accidental choice, with the corollary finding that they had come to Slovakia primarily for a job they had already arranged, to join relatives already living here, or to study.

According to the IVO study, many migrants (33 percent) perceived bureaucracy as the biggest obstacle they had to face in Slovakia. Similarly, 32 percent felt insecurity about their residency permit, and 28 percent perceived serious obstacles in becoming familiar with Slovak legislation and the country's tax system.

“Slovakia is clearly very restrictive, conservative and not very supportive in the integration of foreigners,” Oravec told The Slovak Spectator, adding that Slovakia’s integration policy is not progressive and does not work in practice.

MIPEX III stated that immigrants can best integrate in Slovak society by establishing long-term residency with their families based on EU law “even if discretionary Slovak procedures create more problems than in most countries”.

Števulová noted that Slovak laws give broad leeway to bureaucrats to decide about granting, renewing, or cancelling a migrant’s residency permit.

According to MIPEX III, problems in the area of granting citizenship to foreign nationals became worse after Slovakia’s Citizenship Act was amended in 2007. Slovakia now imposes Europe’s longest waiting time before making migrants eligible for citizenship, three years after acquiring a permanent residency permit, while adding that applicants for citizenship must overcome “some of the most subjective and restrictive conditions”. The report stated that the citizenship procedure in Slovakia is difficult, potentially lengthy (24 months), and is one of the most expensive (€663.50), especially for central Europe.

A blue card for some

Slovakia’s policies towards new non-EU migrant workers are “nearly unfavourable” and “could jeopardise their long-term economic integration”, the MIPEX III authors stated. Slovakia was the only country in the comparative evaluation to receive zero points on the criteria of access to the labour market and targeted support to migrants.

The report noted that these migrants cannot access public employment services and in principle must leave Slovakia if they become unemployed. The jobs they can be hired for can also be well below their actual skills because non-EU qualifications might not be recognised, MIPEX III states.

Števulová stated that access to the labour market also depends on the type of residency permit a migrant is granted and that landing a job matching a migrant’s education, qualifications and experience can prove challenging. She noted that another negative aspect of Slovak legislation is the dependence that a migrant worker has on his or her employer, since obtaining a work permit and residence permit are connected with having a specific employer.

Experts say more effective rules covering migration and integration of migrants are needed as Slovakia can expect a more significant inflow of migrants in the future.

According to the Labour Ministry, the Slovak labour market will need highly-qualified workers, mainly in the health sector – both physicians and nurses – but technical and IT professionals, teachers, pharmacologists, biochemists and professionals in the machinery and automotive industries as well.

The migration process for people with professional skills should become easier for those seeking to work in Slovakia after the country starts issuing so-called blue cards to those who have secured, in advance, a job in Slovakia that is equivalent to a highly-qualified position in EU terms and carries a salary at least 1.5 times the average monthly salary in that particular field.

Daniela Šulcová of the Labour Ministry’s press department told The Slovak Spectator that these blue cards will be issued on the basis of the law on illegal work and illegal employment that will become effective on July 20, 2011.