Coalition unrest over 'no' for Paluda

JUST AS tension within the coalition was rising as a result of the fraught selection of the next general prosecutor (though that somewhat eased after a vote on May 17; see main story), another disputed nomination has generated yet more trouble. The post of the head of the National Security Office (NBÚ), Slovakia’s main security vetting agency, remains vacant despite the fact that Freedom and Solidarity (SaS) has already proposed two candidates. Observers warn that continued failure to fill the post could prompt more tension and risk further reducing trust among the coalition parties. 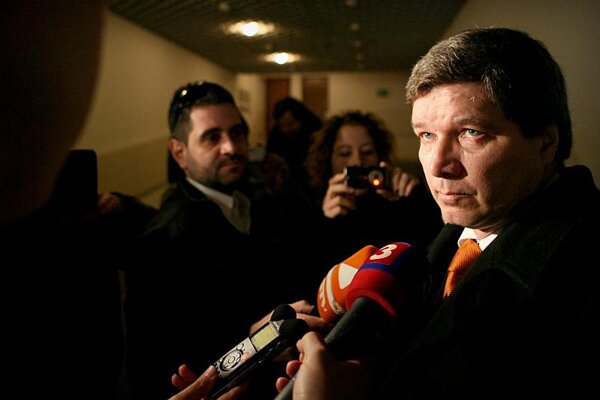 JUST AS tension within the coalition was rising as a result of the fraught selection of the next general prosecutor (though that somewhat eased after a vote on May 17; see main story), another disputed nomination has generated yet more trouble. The post of the head of the National Security Office (NBÚ), Slovakia’s main security vetting agency, remains vacant despite the fact that Freedom and Solidarity (SaS) has already proposed two candidates. Observers warn that continued failure to fill the post could prompt more tension and risk further reducing trust among the coalition parties.

It had seemed that nothing stood in the way of the most recent SaS nominee, Supreme Court judge Peter Paluda. As well as his long record as a senior judge, he has served as Slovakia’s representative to the EU's justice organisation, Eurojust, and is a staunch critic of controversial Supreme Court head Štefan Harabin.

As well as SaS, two other parties in the four-party coalition, Most-Híd and the Christian Democratic Movement (KDH), had said they supported his nomination – and Prime Minister Iveta Radičová, of the Slovak Democratic and Christian Union (SDKÚ), said Paluda was an acceptable candidate for her as well.

But on May 11 the SDKÚ parliamentary caucus poured cold water on Paluda’s chances by voting to oppose his candidacy.

Reasons for the ‘no’

SDKÚ MPs initially failed to explain their objections to Paluda, causing more bad blood among the parties during the tense mid-May run-up to the secret vote on the general prosecutor in which Radičová’s future as prime minister was at stake.

After their meeting, SDKÚ caucus leader Jozef Mikuš refused to specify any reasons for his MPs’ decision, stating only that it would ‘not be appropriate’ to make public statements on the matter in order not to harm Paluda’s name.

“It is as if someone poured a bucket of dirt on you and you cannot say anything,” Paluda reacted in an interview with the Sme daily.

Political analyst Grigorij Mesežnikov of the Institute for Public Affairs (IVO) said the SDKÚ’s stance was not legitimate. Such decisions should be explained, he said.

“They shouldn’t now be surprised if their candidates in the future don’t win the support of the remaining three coalition partners,” he noted, adding that at least an internal explanation would be sufficient.

On May 19 the SDKÚ finally decided to explain its decision. It gave four main reasons for opposing Paluda: his statement that he would look into revoking previously issued security clearances; his decision to sue the Judicial Council for lost earnings over then-justice minister Štefan Harabin’s decision to recall him from Eurojust; SaS’s method of announcing Paluda’s candidacy, i.e. going direct to the media rather than briefing its coalition partners in advance; and what the SDKÚ said was Paluda’s lack of managerial experience.

The final reason had already been cited in media reports. However, Paluda himself responded to that claim in a brief interview with the Sme daily by asking: “What kind of managerial skills had Mr [František] Blanárik?”

Blanárik, the outgoing NBÚ boss, was an alleged former agent for the communist-era military intelligence agency and stepped down from his NBÚ post under intense media pressure after reports about his past were re-published earlier this year.

SaS accepts only one reason

Responding to the SDKÚ list, SaS leader Richard Sulík said that he could accept only the first of its reasons, and called the remaining three "pseudo-reasons". But he confirmed that SaS would no longer insist on Paluda’s candidacy, as it had previously said it would.

Echoing Mesežnikov’s comments, Sulík said SaS would not rule out using its right to veto other coalition parties’ candidates in future.

Unlike the majority of the SDKÚ caucus, Radičová says she still considers Paluda an acceptable candidate.

“I consider him a principle-driven person and [the rejection] does not change my attitude at all,” SITA reported her as saying after her party had rejected his nomination. The only other member of the SDKÚ who is known to have supported Paluda during the caucus session is another former judge, now an SDKÚ MP, Jana Dubovcová.

The opposing opinions within the party have once again provoked debate about the cohesion of the SDKÚ and the prime minister’s position within her own party. Even Defence Minister Ľubomír Galko, an SaS nominee, hinted at problems within the SDKÚ in his blog entry from May 15 entitled ‘The time has come for a change or we will not give up Paluda’.

“The prime minister being slapped in a live broadcast by people of her own party is something I cannot get used to,” he wrote.

Galko said he is convinced that the current situation is harming the whole coalition and called on his coalition colleagues to put their cards on the table.

“If someone wants to break this government and rule with [opposition party] Smer” then they have to declare it openly and not through intrigues and games, he said.

Mesežnikov agreed that the present situation, if it continues, might increase tension among the coalition partners and break the trust between them. He noted that the SDKÚ often takes a strange stance on personnel issues.

“If there are disqualifying factors [for the candidate], coalition partners of course have the right to veto the nomination,” he said. “But in Paluda’s case there was nothing like that.”