THE OPENING of the Austrian and German labour markets on May 1 was long anticipated but it appears that lifting this last barrier to (almost) fully free movement of labour within the European Union will not have any significant impact on the Slovak labour market. Those Slovaks who wanted to work in either of these two countries had probably already found a path to do so, while insufficient language skills are likely to continue to act as a barrier to mass migration by Slovak workers. 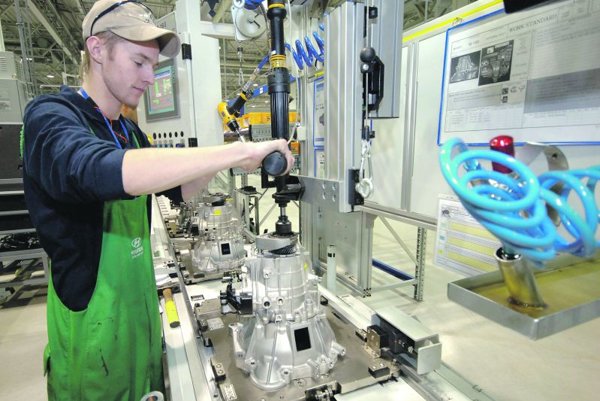 THE OPENING of the Austrian and German labour markets on May 1 was long anticipated but it appears that lifting this last barrier to (almost) fully free movement of labour within the European Union will not have any significant impact on the Slovak labour market. Those Slovaks who wanted to work in either of these two countries had probably already found a path to do so, while insufficient language skills are likely to continue to act as a barrier to mass migration by Slovak workers.

Some Austrian and German employers have said they would like to fill their vacancies by hiring qualified Slovak workers and some Slovaks have also been eyeing this opportunity with high expectations but it seems that differences in supply and demand may limit both expectations.

“Austria and Germany [already] had their labour markets open for all wanted professions,” Michal Páleník of the Employment Institute, an employment think tank, told The Slovak Spectator. “So, all of those for whom there was demand are already working there. Simplification of administrative procedures and the opening of other positions will certainly help others to get employed in Germany or Austria, but I do not expect that there will be a lot of those employees. I estimate them at some thousands.”

The Slovak arm of Trenkwalder currently has about 450 job offers from companies in Austria and Germany and about 500 Slovaks seeking jobs in those countries.

“We expect that we will be able to place, via our sister companies, about 1,000 Slovak workers annually in these markets,” Luboš Sirota, the head of Trenkwalder in Slovakia told The Slovak Spectator.

According to Sirota, the presence of Austrian and German companies operating in Slovakia has significantly contributed to building awareness and knowledge about the qualities of the Slovak labour force, which is no longer viewed as something unknown or unclear.

“And the fact that tens of thousands of Slovaks have already been working in Austria and Germany has also built awareness about the Slovak labour force,” said Sirota. “For example, the results of a survey conducted by Trenkwalder Personaldienste of Austria among 395 Austrian companies in February 2011 indicated that over 40 percent of the surveyed companies already employ workers from eastern EU member countries. Almost one half of the respondents did not rule out admitting workers from these countries in 2011 and of these, almost 50 percent were interested specifically in Slovaks.”

According to the experience of Trenkwalder, Austrian and German companies are especially interested in qualified workers with a technical focus: IT experts, certain kinds of industrial workers and also health-care staff.

Sirota believes that Slovaks can find jobs in those countries also in the administration, construction or trade sectors.

Erik Hudák, sales manager of the Slovak arm of Manpower, confirmed a growing interest by companies in Germany and Austria of employing Slovak workers, noting that the biggest interest is in qualified workers, IT specialists, welders and skilled craftsmen as well as auxiliary workers in the construction industry and employees in the tourism sector.

When comparing the requirements that German and Austrian companies expect from Slovak workers against potential employees from other countries, both Sirota and Hudák emphasised that knowing German well is generally a necessity but that the IT sector, dominated by English, might be an exception.

Interest and demand are not aligned

The experiences of these personnel companies thus far show a mismatch between demand in the German and Austrian labour markets and the supply available from other countries.

“Applicants who declare an interest in a job abroad have mostly completed their secondary education with the school-leaving exam,” Lucia Burianová, spokesperson for Profesia, told The Slovak Spectator. “The second most numerous group of applicants looking for a job abroad are those with completed secondary education but without the school-leaving exam. On the other hand, the most desired group of workers are those with completed university education, and they make up less than one tenth of the job applicants.”

Trenkwalder currently registers about 500 job applicants for positions in Germany and Austria and a survey it conducted among job applicants confirmed a general interest in finding a job abroad.

“As many as 50 percent of the respondents would like to apply for a job in Germany, Austria or Switzerland,” said Sirota, adding that the highest interest is in Austria. “With regards to Austria and Germany, we register the highest interest in unqualified work positions in the sectors of
manufacturing and service, in which 100-percent knowledge of the language is not required.”

Poor knowledge of the German language is a sore spot. A survey conducted by Trenkwalder among 1,504 respondents in Slovakia showed that of 625 respondents who answered the question about their language level for the country in which they want to work, just over half said that they were only able to make themselves understood and only 19 percent said they had mastered the language.

“This clearly indicates that the language barrier is slowing down Slovaks in searching for jobs abroad,” Sirota stated.

Trenkwalder in Slovakia registered the highest interest in jobs in Germany and Austria from Slovak applicants for the positions of bricklayer and bricklayer helper, waiter, shop assistant, painter-decorator, assistant cook as well as in services in hotels. But Trenkwalder reported that the demand for labour from these countries focuses more on specific qualified positions in manufacturing and service sectors which require fluent language skills.

Sirota stated that there are some huge qualitative differences between demand and supply.


“The problem is that even though we have enough candidates for a given position, the applicants do not speak the language at the required level,” Sirota said, adding that employers are interested in highly-qualified manufacturing positions using CNC [computer numerical control] machines, welders, electricians and other skilled jobs. “These positions are, in terms of suitable candidates, quite difficult to fill. On the other hand, if candidates spoke the language, certainly German or Austrian firms could motivate them better financially [than Slovak employers].”

Sirota said he expects that in the future employers from these countries will ‘overpay’ for suitable, experienced employees and that will push employers in Slovakia to increase wages for these positions here and that some domestic employers might have to look for certain kinds of labour from abroad.

Slovakia suffers from higher levels of unemployment among people with lower qualifications and it does not appear that the opening of the Austrian and German labour markets will be a miraculous cure for this problem.

“People with higher as well as lower qualifications have a chance [to get a job], but it is unrealistic to expect that too many Slovaks will be hired in those countries,” said Páleník of the Employment Institute.

Hudák of Manpower agreed that the inability of many Slovaks with low qualifications to speak German decreases the likelihood that they can get a job in Germany or Austria.

“Unless they speak the language at a level adequate for a given work position, they must reckon that an Austrian or German employer would only be satisfied with leading such people via team leaders who are Slovaks who speak German; for example, one team leader leading 10 workers who do not speak German,” Hudák said.

Sirota thinks that a person’s chance of landing a job in Germany or Austria depends on the exact position that a worker seeks but that language skills and good qualifications are almost always necessary.

“Most employers from these countries primarily need qualified labour with sufficient language skills,” Sirota said. “A survey by Trenkwalder among 395 Austrian companies showed that 42.9 percent of those interested in labour from newer EU member countries had a need for experts and 31.1 percent for language skills. Only 14.3 percent of these companies put savings on costs as the reason for employing labour from abroad. Thus, lower qualifications are a strong constraint.”