MEMBERS of the Union of Women of Slovakia (Únia žien Slovenska, ÚŽS) in the town of Malinová prepared an exhibition of historical wedding portraits to mark Slovakia’s “month of love” at the beginning of May. 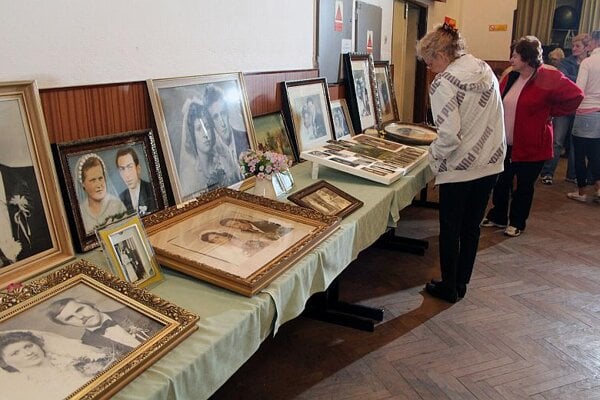 MEMBERS of the Union of Women of Slovakia (Únia žien Slovenska, ÚŽS) in the town of Malinová prepared an exhibition of historical wedding portraits to mark Slovakia’s “month of love” at the beginning of May.

Malinová, in the Horná Nitra region, has regularly hosted an exhibition of handicrafts or needlework in May for almost 50 years but this year photographs of newlyweds were added to the event.

Though the tradition seems to have changed its form now, in days past almost every married couple ordered an official portrait by a professional photographer, often taken in a studio, while wearing their wedding attire.

Eva Benková, the chair of ÚŽS Malinová, told the TASR newswire that many couples tended to frame and hang their portraits in a bedroom as a memory of their big day and to commemorate their love. Benková said she was inspired not only by her own wedding photo but also by the portraits of marital bliss taken of her mother and grandmother and thought it would be nice to show off her old photographs to others. She added that she had no idea how successful the idea would be among other residents.

Almost 50 portraits were offered, mostly black and white, made in period studios. Some of them had been colourised, a popular trend before the advent of colour photography. The oldest photograph was from the 1930 marriage of Florián Schön, a Malinová resident. Several people also offered unframed, smaller portraits from their weddings.

Local visitors reportedly spent a lot of time in friendly quarrels attempting to guess the identity of those in the photographs. The exhibition turned out to be a testimony to an older period and an interesting historical display not only about people but also about fashion – about the wedding attire of brides and grooms in changing periods. Benková said the exhibition was a great success and thinks it should be repeated from time to time.