THE FUTURE of Trnava’s Ján Koniarek Gallery (GJK) remains uncertain following the dismissal of its director and the suspension of its programme of exhibitions for 2011. Though it has been several months since Vladimír Beskid left his position, the interest of the media in the gallery’s fate has recently been renewed after a major festival was cancelled only days before it was supposed to start at the GJK. 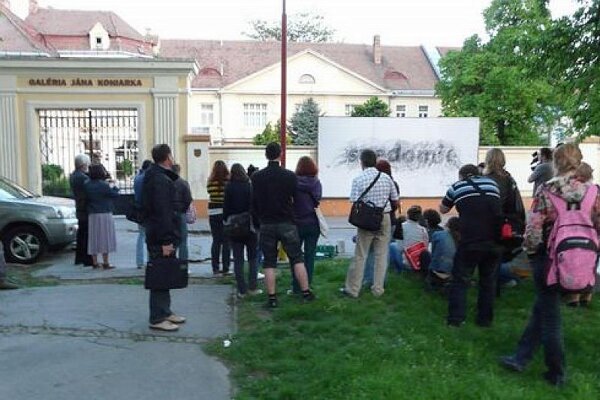 THE FUTURE of Trnava’s Ján Koniarek Gallery (GJK) remains uncertain following the dismissal of its director and the suspension of its programme of exhibitions for 2011. Though it has been several months since Vladimír Beskid left his position, the interest of the media in the gallery’s fate has recently been renewed after a major festival was cancelled only days before it was supposed to start at the GJK.

Vladimír Beskid was dismissed by the Trnava Regional Parliament on February 9 over what officials called repeated breaches of discipline, which included a late submission of the property declaration and several instances where violation of safety procedures occurred, such as insufficient training of cleaning personnel working on ladders.

“I hold Mr Beskid to be an irresponsible person, acting without respect for the institution he presided over, for his co-workers and for our cultural heritage,” Tibor Mikuš, president of the Trnava Self-Governing Region and the author of the proposal to dismiss Beskid, told the TASR newswire after the council session.

At the time, Beskid’s dismissal prompted widespread protests from the public. Over 700 artists, curators and students from Slovakia and the Czech Republic signed an online petition objecting to the decision and a group of protesters gathered outside the council office on the day of the session.

Three months later, Jakub Slobodník was appointed provisional director of the GJK. On April 27, only a day after his appointment, Slobodník announced that the gallery’s 2011 programme of exhibitions had been cancelled until further notice “due to changes in the management team of the gallery and the dissolution of the Gallery Council”.

The GJK Gallery Council serves as an advisory board to the director and annually approves GJK’s programme of exhibitions. After Beskid’s dismissal it was dissolved by the Trnava Regional Council. Slobodník added in an official statement that GJK’s permanent collection remains accessible to the public.

Among the cancelled events was Multiplace, a festival of the new media, planned to be held at the GJK between May 2 and 6. Founded in 2002, Multiplace takes place every year simultaneously in different European countries. The 2011 edition was held in several towns throughout Slovakia, Romania, France, Iceland, Hungary and the Czech Republic. The announcement of the festival’s cancellation immediately sparked new protests.

“The provisional cancellation of the programme of exhibitions is unjustified and unprecedented; it reminds me of the practices of the former regime, which used to prevent underground artists from freely exhibiting their works,” Magdaléna Klobučníková, president of the Council of Slovak Galleries, wrote in an open letter to Slobodník. Organisations such as Trnava Forum 89, East of Paradise and the Slovak section of the International Association of Art Critics (AICA) sent similar letters to the gallery's management.

The artists who were supposed to take part in the May festival protested against the decision by showcasing their works on a fence outside the GJK. One of the videos screened, an animated short film by Viliam Slaminka entitled Who’s the Boss Here? is an allegorical reaction to Beskid’s dismissal. According to Jana Kapelová, a visual artist who also took part in Multiplace with a series of video-lectures, this particular movie – and especially its title – might have been among the reasons the festival had been cancelled.

“We obviously touched upon a sensitive issue,” she told The Slovak Spectator. “We did not expect that this playful, slightly ironic video, which nobody had actually seen before, could lead to such a reaction, which is clearly an instance of censorship.”

Juraj Čarný, chairman of the Slovak section of AICA, agreed, stating that “it is now a public secret that there were political reasons behind this measure”.

When contacted by The Slovak Spectator, Slobodník refused to explain his decision to cancel Multiplace along with other events scheduled for 2011, stating only that “Trnava Region is the only authority competent to provide information of this kind”. He likewise refrained from commenting on GJK’s future.

“Being only a provisional director, I am not in the position to talk about the future of the gallery,” he said. “Once a new director has been appointed, he or she will decide about what kind of events will be held at the GJK.”

Patrik Velšic, spokesperson for the Trnava Self-Governing Region, confirmed that a new programme of exhibitions will only be approved after the appointment of a new director. The selection process is currently ongoing and should be completed by the end of June, he added. As for the cancellation of Multiplace, Velšic said “it was not even listed on the approved programme of exhibitions planned for 2011, as was the case with many other events organised by the GJK both in its premises and even abroad”.

Beskid confirmed that Multiplace had not been included in the schedule but said this did not justify its cancellation.

“The programme of exhibitions, as its name suggests, features only exhibitions, and not festivals or other kinds of events; in addition, the GJK has taken part in Multiplace every year since 2002 and was one of its founders, so our participation in 2011 was certainly not a secret matter,” the former director told The Slovak Spectator.

Beskid said he viewed his dismissal “as yet another instance of repeated incompetent interventions and efforts to assert power over the gallery’s activity, with the objective to put forward mainstream and kitsch. I find this unacceptable, barbarous, and strongly reminiscent of the earlier times.”