THE THRESHOLD for using a minority language in official communication – which also includes displaying the names of villages and public institutions in both the state and the minority language – will drop from the current 20 to 15 percent – but no sooner than in ten years’ time. Until then, the current status quo will be preserved. 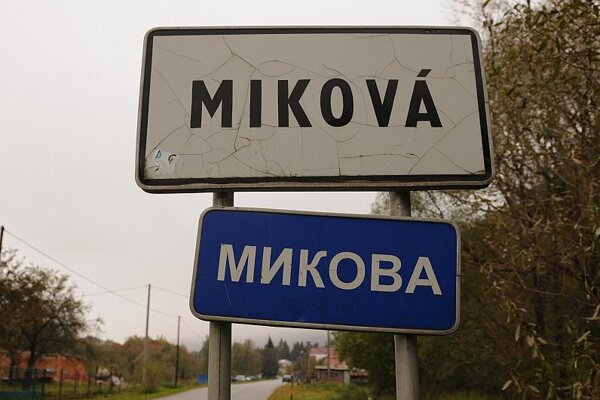 All villages that are now bilingual will remain so until at least 2031. (Source: Jana Liptáková)
Font size:A-|A+0

THE THRESHOLD for using a minority language in official communication – which also includes displaying the names of villages and public institutions in both the state and the minority language – will drop from the current 20 to 15 percent – but no sooner than in ten years’ time. Until then, the current status quo will be preserved.

Parliament passed the long-awaited Act on the Use of Minority Languages, drafted by the deputy prime minister for national minorities and human rights, Rudolf Chmel, on May 25, after a long debate on the pros and cons of allowing members of Slovakia’s national minorities wider use of their mother tongues in public communication, with a majority of 78 MPs – all of them coalition deputies – voting in favour of the law.

Chmel’s amendment also introduced bilingualism across the whole bureaucratic agenda, including records, rulings, statistics, evidence, and the agenda of churches – but not for the public registry, which will remain in the state language only.

The original draft of the law was watered down by many changes proposed by Ordinary People faction leader Igor Matovič, who said in the parliamentary debate that he wanted to make sure that minority rights were not broadened at the expense of the majority.

According to the law passed by parliament, citizens have the right to use a minority language when interacting with public officials only in those municipalities which conform to the threshold set for using that minority language. Chmel had wanted to widen the right to cover the whole territory of Slovakia.

Another change demanded by Matovič was the requirement to obtain the consent of members of a municipal council as well as that of the mayor before conducting a local council session in a minority language. Chmel’s version only required the council’s consent. Matovič also succeeded in deleting a requirement for health-care facilities to have an interpreter or an employee who speaks the minority tongue.

A bone of contention among the ruling coalition parties was the level of the threshold required to trigger use of a minority language in a municipality. Most-Híd, a member of the four-party governing coalition which campaigns bilingually in Slovak and Hungarian, proposed 15 percent instead of the current 20 percent of minority citizens living in a municipality, but the party was not able to get the support of some coalition partners, notably the Christian Democratic Movement (KDH) and Matovič’s faction.

In the end, postponement of a reduction in the threshold was accepted as a compromise by all the parties. According to the law, 15 percent will be required for a municipality to become bilingual, but such a threshold must be achieved in two consecutive censuses – that is, in the census currently taking place and in the next one, most likely in 2021. There will be no change in the number of bilingual municipalities for the next 10 years, which means that the 20-percent threshold applied based on the results of the 1991 census will remain in use.

However, a municipality will only lose its bilingual status if it records the number of minority inhabitants lower than 15 percent in three consecutive censuses – which in practice means that the number of bilingual municipalities will not drop before at least 2031 (if the decennial periodicity of censuses is observed).

For Chmel’s Most-Híd the law on minority languages was one of its key objectives for the current parliament. This was partly because it was necessary to amend the law on minority languages in order to make it compatible with the recently changed law on the state language (the two laws must be compatible), and partly because the party also set as one its aims what it called a more comprehensive concept of minority policy in legal terms, Chmel explained in an earlier interview with The Slovak Spectator.

“I am sincerely glad this law was passed,” said party leader Béla Bugár, calling it a reasonable compromise that helps stabilise the legal system of Slovakia as directed towards minorities, and thus contributes to the stability of the democratic system in the country. He called the norm one of the most important steps taken by the current government.

Passage of the law through parliament was preceded by long negotiations within the ruling coalition and then marked by an outspoken debate in the chamber. The parliamentary discussion lasted almost two days, and until the last moment the KDH remained split over the vote. Finally, only Martin Fronc of the KDH did not vote in favour.

The opposition parties, Smer and the Slovak National Party (SNS), criticised the law and repeatedly accused the government of collaborating with the Hungarian government of Viktor Orbán.

“I see it as a purely Hungarian agenda directed against Slovaks and other nationalities living in the Slovak Republic,” Smer’s Dušan Čaplovič said, as quoted by the SITA newswire.

Chmel argued that, on the contrary, the minorities who would benefit most from his version of the amendment were the Ruthenian and Roma minorities, not the Hungarian minority.

Despite a proposal by Ondrej Dostál, a member of the Most-Híd parliamentary caucus, to drop fines from both the law on minority languages as well as the State Language Act, the law retained the option of fines, ranging from €50 to €2,500, for violations of the law.

“The right wing [parties] loudly criticised the fines during the Fico government’s term, but despite that they don’t want to cancel them, for reasons unknown to me,” Dostál said in an interview with the Sme daily.

Chmel has also objected to the fines. In an interview with The Slovak Spectator he said that the term ‘sanction’ or ‘fine’ in relation to use of one’s language is “a drastic intervention into society, as language is a very intimate issue.” Despite that, he said the fines are necessary in the amendment so that the law on minority languages exactly matches the State Language Act, which introduced fines after being amended by the Fico government in 2009, something which prompted a wave of criticism at home as well as from international minority rights watchdogs.