Five Energies for the country

We connect the world of power plants with the surrounding world 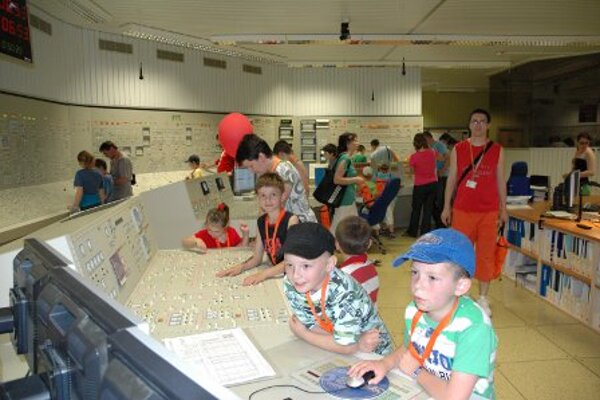 We connect the world of power plants with the surrounding world

Increasing energy efficiency, reducing the production of carbon-dioxide emissions and waste, securing the energy independence of Slovakia by finishing the two blocks of Mochovce nuclear power plant, modernisation of classical power plants – all these are well-known issues connected to power producer Slovenské elektrárne. Slovenské elektrárne, as the most important producer of electricity in Slovakia, are implementing, aside from their trading activities, a long-term, deliberate and planned programme of corporate social responsibility called Energy for the Country. Briefly summarised, Energy for the Country follows us everywhere. It reflects a policy of social but also environmental responsibility of the company. A number of activities is included within five basic spheres. Each activity is given a specific energy: energy for environment, energy for life, energy for education, energy for culture, or energy for sport.

Recently, media outlets have reported widely on the most well-known of the projects within ENERGY FOR LIFE: Gypsy Spirit, which focuses on supporting the active efforts of all those who participate in improving the situation of Roma in Slovakia. Awarding good examples, evaluating, but also reminding people of the importance of developing personality, has struck a chord both in the Czech Republic and in Slovakia. Awards in five categories: Non-governmental organisation, Company- business, Extra-school educational activities, Personality and Act of the year, were again awarded during a gala evening at the City Theatre of P.O. Hviezdoslav in Bratislava.
The second – but for Bratislava inhabitants probably the best-known project that is assisted by Slovenské elektrárne within the Energy for Life project is the support for the non-profit organisation Depaul Slovensko. The Shelter of St Vincent De Paul is the first low-threshold shelter for the homeless established in the Slovak capital, and thanks to the support of Slovenské elektrárne it continues to operate and offer services to the long-term homeless who are not able, due to their situation, to fulfil the requirements of existing shelters and dormitories. This low-key project has attracted attention across the whole Enel Group, and further cooperation will also be supported by the Enel Cuore Foundation. Thanks to a big investment which will be announced in the upcoming weeks, Bratislava will be able to secure much better conditions for this social group.

Protection of the environment is among the greatest challenges and spheres within the corporate social responsibility activities of most companies in Slovakia. Slovenské elektrárne introduced their programme ENERGY FOR NATURE several years ago. Activities implemented within this programme protect and cultivate the environment in which we live. The previously-mentioned reduction of emissions and waste production, as well as a contribution towards an increase in the share of renewable sources in the production of power, is part of this. Apart from these investment activities, the company, within its environmental strategy, continues to develop partnerships with Slovak national parks and supports the development of biodiversity. 2010 was marked by efforts to preserve birds of prey – the Golden Eagle and the Lesser Spotted Eagle. Other activities aimed to support the now-sparse population of Tatra Marmots and Chamoix, and the Brown Trout. The most popular projects in the High Tatras included the installation of photovoltaic panels at Téry’s Chalet and Zbojnícka (Bandit) Chalet. A novelty in 2011 is an analysis of the potential use of water for power production at Brnčalka Chalet.

ENERGY FOR EDUCATION develops cooperation with schools and universities in Slovakia, the goal being to evoke interest among young talents not only in studying technology at colleges and universities, but also in working in the energy sector.
Each year, Slovenské elektrárne allocate the Aurel Stodola awards and provide financial gifts for the best Bachelor’s, Master’s and post-graduate theses focused on energy. For several years, an entertainment-educational project by the Enel Group has been bringing interesting issues connected with energy, science, technology and a sustainable environment to elementary and secondary schools in many countries within the project known under the title Play Energy. The competition promotes knowledge about the world of energy and urges young people of all ages to discover the world of electric power and science. Students from Italy, Bulgaria, Chile, Costa Rica, Greece, Guatemala, Panama, Romania, Russia, Slovakia and the United States are presented with the challenge of using their creative and designer skills. They come up with effective proposals for improving the quality of life and promoting the rational use of electric power in the places where they live, as well as creating energy efficiency models and savings to the benefit of the environment and the whole of society.
Slovenské elektrárne, within their long-term programmes of collaboration with academia, e.g. in Slovakia with the Slovak Academy of Sciences (SAV), Slovak University of Technology, and foreign and specialised institutions, try to support scientific development in the sphere of energy. Examples include discussion at the level of the Enel Group about international cooperation on research programmes, or the first steps of Slovenské elektrárne towards founding a competency centre in cooperation with SAV.

ENERGY FOR CULTURE includes projects supporting cultural events and various genres of art, from music of different types (classical – Zlaté husle, jazz – Bratislava Jazz Days, folklore – Folklore Festival Východná), through theatre (Andrej Bagar Theatre in Nitra, Radošina Naive Theatre, Virtual Theatre in Trenčín), to less traditional forms of art like the Kremnica Gagy festival of humour and satire. Slovenské elektrárne also support the spread of Italian culture and traditions in Slovakia through the Dolce Vitaj festival, but they also export the best of Slovak culture to Italy. Within Energy for Culture, Slovenské elektrárne cooperate with the whole range of important cultural institutions – the Slovak Culture Ministry, the Slovak National Gallery, the National Culture Centre, and many others.
In May, Slovenské elektrárne were the general partner of the international festival of modern circus Cirku l’Art which was presented for the first time in Slovakia. The Medical Garden in Bratislava was transformed into a showground for new top performers from Austria, Spain, Portugal, France, Italy, Belgium and the Czech Republic. This refreshing event has enjoyed great popularity in several European metropolises, and was undoubtedly a big success in the Slovak capital too.
An important project, literally the most visible in the Žilina region, is that to provide new lighting for Orava Castle, made possible by Slovenské elektrárne in cooperation with Žilina Region. The old lighting, dating back to 1970s, was completely replaced, meaning that the second-most-visited castle in Slovakia is now lit by 83 lamps. Thus, the dominant historical monument in Orava has been included among those monuments which are lit in a modern way, like the Colosseum in Rome, Berlin's Brandenburg Gate, the Presidential Palace in Warsaw and Prague Castle.

ENERGY FOR SPORT will bring another novelty this year. Dni športu bez bariér / Days of Sport without Barriers was founded thanks to the inspiration of Slovenské elektrárne’s mother company, Enel, which supports the National Paralympics Day in Italy. In Janko Kráľ Park in Petržalka on June 22, Slovenské elektrárne together with Slovak Association of Disabled Athletes and Bratislava City will enable non-disabled children to try sports in which disabled athletes – children and adults alike – compete.
Last year, Slovenské elektrárne became the partner of the Slovak Volleyball Federation. This young, dynamic and aesthetic sport attracts an ever growing number of active players, fans and supporters. It is the third most-watched team sport in Slovakia. By supporting the Slovak Volleyball Federation, Slovenské elektrárne want to secure better conditions for the development of the sport, so that the national team, individual teams and, especially, young players have enough space, opportunities and resources to develop their talents.
This year, Slovenské elektrárne present the jubilee year of the cycle race Okolo Slovenska / Tour of Slovakia, the first leg of which begins on June 4. The race is also an excellent means to present the beauty of Slovakia, as individual legs pass Bojnice Castle, through Čičmany, Rajec and many other picturesque places. More than 15 teams and 120 racers will complete the race, with the eighth leg on June 11 in Gabčíkovo. The hydro power plant and the waterworks at Gabčíkovo will on that day host members of the public from far around within the Open Plant series of events. Via Open Plant, Slovenské elektrárne allow people to look behind the scenes at the daily work of energy industry employees.

This year, you can visit the nuclear power plants at Mochovce (on May 21) and Jaslovské Bohunice (June 18), the hydro power plants at Liptovská Mara (May 28) and Gabčíkovo (June 11), and the thermal power plants at Nováky (June 4) and Vojany (June 25). Don’t hesitate – come and draw the energy!