SLOVAK nationalist politicians and their supporters could be forgiven for experiencing a spot of déja-vu at the moment. Anna Belousovová, once the most prominent representative of the Slovak National Party (SNS), has left her party to establish a new political party based on what she called “a non-xenophobic and non-confrontational patriotism”. 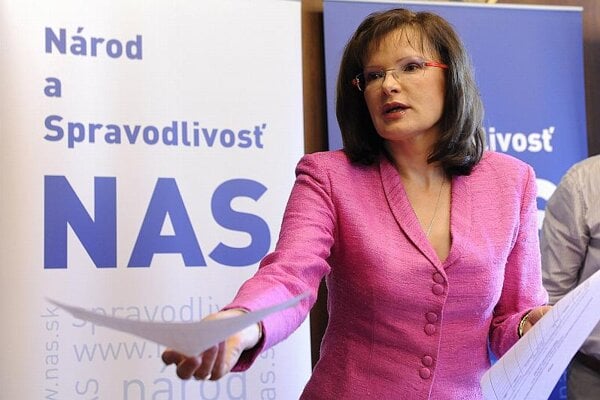 SLOVAK nationalist politicians and their supporters could be forgiven for experiencing a spot of déja-vu at the moment. Anna Belousovová, once the most prominent representative of the Slovak National Party (SNS), has left her party to establish a new political party based on what she called “a non-xenophobic and non-confrontational patriotism”.

Her action is an almost exact re-run of a previous split in the party a decade ago, a poisonous spat which resulted in the SNS and its splinter party losing all their seats in parliament for one election term. A political analyst says he does not expect the new party to have a very bright future.

Belousovová and Rudolf Pučík, two of the nine members of SNS's parliamentary caucus, announced on May 24 that they were leaving the caucus to become independent MPs. They stated their membership in the caucus recently had been only a formality as the caucus had stopped inviting Belousovová to its sessions and Pučík only sporadically received invitations.

The departure of the two MPs from the SNS caucus provoked discussion among some lawyers and parliamentarians about the future of the SNS caucus in this parliament because the applicable law says eight MPs are required for creation of a caucus. The Speaker of Parliament, Richard Sulík, announced that he had consulted with parliament’s lawyers who had concluded that the law does not specifically authorise the speaker to dissolve a caucus with less than eight MPs.

Three days after she left the SNS caucus, Belousovová, accompanied by Pučík, announced she was starting a petition to found a new political party named Nation and Justice (NAS). The signatures of 10,000 Slovak citizens are required for a political party to be legally registered.

Belousovová said she believes it is necessary for a new political party to emerge in Slovakia, one that would be based on what she called “the current civilised, democratic, non-xenophobic and non-confrontational patriotism”, which she said is represented by newly-emerging movements and parties in Europe and beyond: the Tea Party movement in the US; the True Finns party in Finland; the Party of Freedom of Geert Wilders in the Netherlands; and nationalist parties in Austria and Switzerland that are currently on the rise in their countries.

“The leaders of the traditional ruling parties and representatives of the UK, Germany and France are rejecting late-20th-century multiculturalism and are speaking out loud about the need for new approaches,” Belousovová also stated.

Political scientist Grigorij Mesežnikov does not foresee a bright future even if NAS is legally established, believing that it has little potential to become a relevant player on the Slovak political scene.

“They could harvest a percent or so if they started now very intensively building their structures and promoting the party,” Mesežnikov told The Slovak Spectator. But he added that since Belousovová is not a new face in Slovak politics and is well-known for her style of politics and her opinions, he doubts if there is a real chance for the party to be a key player in the Slovak party system.

Mesežnikov also suggested that many of the people now around Belousovová represent no real alternative to the SNS since these individuals supported SNS chairman Ján Slota on all issues in the past.

“It’s all the same all the time, radical nationalism and the Hungarian card, so there is no room for any alternative, although [Belousovová and Pučík] now present themselves as those who desire more decent nationalist politics,” Mesežnikov said. “But they had an opportunity to do that in the party they were a part of and nothing like that ever occurred.”

Mesežnikov added that the main reason for the conflict between Belousovová and Slota is not differing opinions, because they were usually of one mind on key issues, but rather an ongoing power struggle within the party and the subsequent accusations made by each of them that led Belousovová to break away.

Belousovová, the first vice-chair of the SNS until last year, was expelled from the party on February 2 this year, with all 14 members of the SNS presidium backing what they called a disciplinary action against her “for damaging the name and the interests of the SNS”.

Belousovová ran for the post of SNS chair against Slota in September 2010, following the party’s poor showing in the 2010 general election in which it came close to losing its seats in parliament. In her campaign to become leader she criticised the scandals that dogged the SNS during its time in government between 2006 and 2010. The SNS congress did not elect her and instead stripped her of the vice-chair position. She was then stripped of all other posts she held and was not included on the party’s list of candidates for the municipal elections in November 2010.

Belousovová and Slota have had a troubled relationship for many years. The SNS entered the 2002 general election divided between groups led by the two individuals and failed to reach parliament as a result. At that time it was Slota who broke away from the party, which had been led by Belousovová (née Malíková) from 2001 to 2003.

While Belousovová started a petition drive to establish her new party, SNS head Slota paid a visit to a Roma community in Podskalka, near Humenné, an unusual step for him as he has been quoted several times in the past expressing anti-Roma statements.

“I am convinced that we’ve got a lot of sympathisers here among these Gypsies,” Slota stated in an interview with the Sme daily during his visit to the Roma community.

Sme wrote that Slota said he believed Roma culture enriches Slovak culture, adding that “by no means do I have xenophobic or racist views towards the Gypsy community” and that his party wants to help Roma be included in a society-wide discourse in Slovakia.

“He did it out of speculative reasons,” Mesežnikov commented about Slota’s visit. “This party has offered so many ‘solutions’ for Roma problems that it can only be perceived as a sort of folklore. It’s a typical example of a sort of mimicry. I believe this party is well known for the fact that its representatives often have made anti-Roma statements.”