THE COLOURS of the rainbow were due to shine over Bratislava on June 4 in the form of the Pride march, but the world had become slightly greyer for Slovakia’s non-heterosexuals a few weeks earlier. It was then that gay people living in Slovakia came very close to getting an official body, working under the auspices of the government, to look after their interests – but the initiative to set up a committee to do that ultimately failed. And while politicians tend to use the unpreparedness of Slovak society as a justification for their timidity, the lesbian, gay, bisexual and transgender (LGBT) community insists that society is, in fact, ready for some changes. 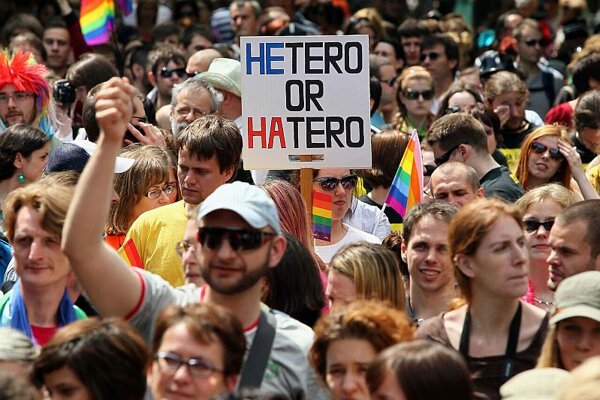 THE COLOURS of the rainbow were due to shine over Bratislava on June 4 in the form of the Pride march, but the world had become slightly greyer for Slovakia’s non-heterosexuals a few weeks earlier. It was then that gay people living in Slovakia came very close to getting an official body, working under the auspices of the government, to look after their interests – but the initiative to set up a committee to do that ultimately failed. And while politicians tend to use the unpreparedness of Slovak society as a justification for their timidity, the lesbian, gay, bisexual and transgender (LGBT) community insists that society is, in fact, ready for some changes.

In March 2011, the cabinet dissolved several of its advisory bodies – the council for national minorities and ethnic groups, the council for NGOs, for seniors, for disabled people, for gender equality and the committee of ministers of children. The agenda of these bodies was transferred to a newly-established Council for Human Rights, National Minorities and Gender Equality. The new council then proposed that seven committees be created under its auspices, among them a committee on the rights of non-heterosexual people. But while the cabinet agreed to establish the other committees, it baulked at the idea of one for gay rights.


The decision, which some LGBT activists called an act of homophobia, was made on May 11, less than a week before the International Day Against Homophobia was marked around the world.

“We perceive it as a political decision,” said Romana Schlesinger, an LGBT rights activist from the non-governmental Queer Leaders Forum and a Rainbow Pride organiser, adding that the Christian Democratic Movement (KDH) made clear to all the participants in the debate that either the statute of the new council would be passed without the LGBT committee or it would not be passed at all.

“We regard this committee as being redundant, since the human rights issues of all citizens are dealt with by the Government Council for Human Rights, National Minorities and Gender Equality,” KDH spokesperson Matej Kováč told The Slovak Spectator.

Rudolf Chmel, the Deputy Prime Minister for Human Rights and National Minorities, who proposed the creation of the committee, argued along with other supporters of the idea that the committee would bring together representatives of the community and representatives of all the ministries and be a platform for experts to discuss issues, including related legislation, but also anti-discrimination practices, educational programmes and data gathering.

“I am convinced that it would be an advantage for all those concerned to create a space for the formulation of concrete solutions to improve the life of the LGBT community,” Martin Poliačik, an MP for the Freedom and Solidarity (SaS) party, told The Slovak Spectator. His party presented registered partnerships as part of its election campaign for the 2010 parliamentary election, but failed to get them adopted as part of the coalition government’s programme.

Most-Híd, the party of Deputy Prime Minister Chmel, considers the non-existence of the committee to be a deviation from the European standard, “but not an insurmountable problem that would fatally divide the current ruling coalition”, the party’s spokesperson Nora Czuczorová said.

Július Kolenič, a board member of the Inakosť (Otherness) initiative, remarked that such a platform would cost the state no money, but could have helped significantly to improve the quality of life of the LGBT community, which constitutes a considerable portion of the population.


“We regard this to be a homophobic act by Iveta Radičová’s government, since other proposed committees had been created,” Kolenič said, hinting that the LGBT community is the only minority (based on grounds for discrimination as defined by the Slovakia's Anti-Discrimination Act) not to be represented within the council.

“We do not believe that Slovak citizens are discriminated against in any way based on their sexual orientation,” KDH’s Kováč said. “If these people suffer violation of their basic human rights, they have the possibility to turn to the existing institutions.”

Most-Híd spokesperson Czuczorová, however, said that the institute of registered partnerships, for instance, remains taboo in Slovak society despite the fact that in neighbouring countries like the Czech Republic and Hungary it has existed for several years now.

“We are lagging behind our neighbours in Europe concerning many legislative solutions,” SaS MP Poliačik admitted, listing issues like inheritance, common ownership of property, and access to health records in the event of illness or injury. “All these things concern the everyday life of equal citizens of Slovakia and we should be dealing with them.”

Despite the odds, Kolenič said, support for the LGBT community from the Office of the Deputy Prime Minister for Human Rights and National Minorities is now greater than it was in the past. He cited conferences organised by the office and brochures that they are planning to issue.

“But it’s still too little,” he said, adding that the community is less than satisfied with the current position of the non-heterosexual minority in society, the main failure being the fact that only NGOs are keeping alive public discussion on related topics through events such as the Rainbow Pride march or the Inakosť Film Festival.

Politicians tend to excuse their lack of action in the sphere of LGBT rights with the argument that society is not yet ready to accept some legislative steps that would improve the rights of non-heterosexual people in Slovakia. But the LGBT community itself dismisses this as a false argument, saying that society is becoming more and more open and accepting of people with other-than-heterosexual orientations.

According to Schlesinger, there has been limited recognition by all governments, regardless of their ideological basis, that there is no room in terms of public debate about registered partnerships of same-sex couples, for instance, and that expert discussion needs to be launched first.

“Politicians keep talking about the need for public and expert discussion, but their deeds are the exact opposite of that – as seen from their recent decision to not establish the LGBT committee within the government’s council,” Kolenič agreed, adding that there are parties in the government unable to free themselves from the “unjustified, panicked fear of losing voters”.

Paradoxically, Kolenič said, most people in Slovakia long ago understood that human rights are no threat to anyone and that all people, including LGBT people, have the right to a dignified life.

Schlesinger also said that the community feels a change in the perception of LGBT people among the majority, and added that research that the Queer Leaders Forum conducted a couple of years ago showed that more than half of Slovakia’s population has nothing against registered partnerships, although there were still some negative sentiments when it came to the adoption of children. She put this down to the fact that this issue has been discussed for a much shorter time in the public arena.

“The only thing people are missing is information,” Schlesinger said. “And if they get the information, their view of things changes. Our feeling is that society is changing and becoming much more open not only towards otherness in sexual orientation but also towards any other differences.”