TRAIN operators turned their engines off for one hour at the end of May to express disagreement with the state’s plan to sort out the financial crisis affecting the country’s struggling railway companies. 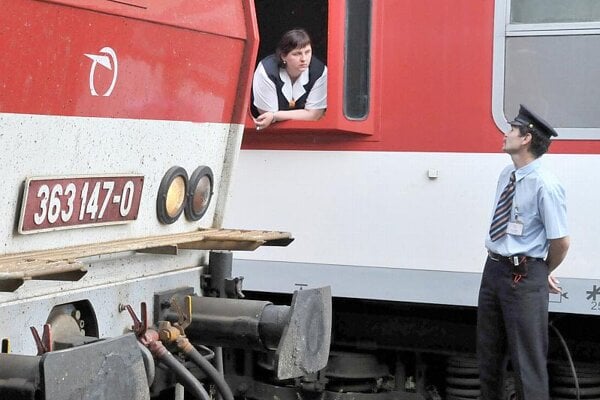 TRAIN operators turned their engines off for one hour at the end of May to express disagreement with the state’s plan to sort out the financial crisis affecting the country’s struggling railway companies.

The state-owned passenger rail operator branded the May 27 strike, which affected about 40 to 50 percent of passenger trains, as ‘an irresponsible act’ and said it lacked clearly formulated demands.

The Federation of Train Operators of Slovakia (SF) said the strike was a success. Nevertheless, the railway company is now calculating the damage and says it might submit the bill to the union.

Altogether, 92 passenger trains across Slovakia joined the strike, representing approximately 40-50 percent of all trains in operation at the time. None of the 30 cargo trains which also joined the strike blocked the operation of passenger services, said the communications department of infrastructure operator Železnice Slovenskej Republiky (ŽSR) in a media release. The Bratislava-Dunajská Streda-Komárno line, where all trains joined the strike, was the most heavily affected, while Košice got off lightest, with no strike-related delays reported in and around Slovakia’s second city.

Minister of Transport, Construction and Regional Development Ján Figeľ said on May 27 that he regretted that the striking train operators were taking their own customers hostage.

“I consider this neither correct nor fair,” said Figeľ, as quoted by the SITA newswire.

The strike took place between 14:50 and 15:50; the strike plan assumed that each train dispatched before 14:50 would stop at the next station and leave only after the strike had ended.

Peter Dubovský, the spokesman for the SF strike committee, said the action had been successful.

“The employer managed to operate some trains but since it was only a one-hour- long strike, the maths is clear that in the event of a longer strike the share of running trains would have visibly dropped since the employer had at its disposal only a limited number of strike breakers,” Dubovský told The Slovak Spectator. “Our goal, after all, wasn’t to paralyse the transport system and cause chaos but to show that we are here, since we started to get the feeling that we have been overlooked by the management of the company.”

But Alexander Buzinkay, spokesman for Železničná Spoločnosť Slovensko (ZSSK), the passenger rail service operator, said the strike demonstrated the need to address issues that the railways have begun gradually dealing with as part of the revitalisation of the sector.

“The strike was an irresponsible act, which moreover lacked sense and clearly formulated demands,” Buzinkay told The Slovak Spectator, adding that it caused damages which the company has not yet calculated.

Buzinkay added that “worse than material damage is the moral damage, such as reducing the credibility of the railways”. He stated the railways might consider seeking recovery of damages via the courts.

The union claimed that railway management exerted pressure on employees to “thwart the strike”.

Dubovský says that managers forced train operators to sign statements on participation in the strike and he quoted ZSSK general director Pavel Kravec as saying “the statements should serve for the purpose of future confrontation”. According to Dubovský, this statement was behind the departure of the strike committee from talks as well as the immediate termination of the talks, which he said “were marred by the company management’s efforts to avert the strike”.

But Buzinkay said ZSSK management had taken several measures to prevent losses and secure services, including, among others, trying to find out who planned to join the strike. He stressed that this had happened on a voluntary basis.

He also stressed that ZSSK would not change its communication with train operators following the strike, providing they continue to perform their working duties.

Kravec told the Sme daily that the programme of revitalisation of the railway sector, already approved by the cabinet, was consulted during so-called roundtables with the leadership of the SF union.

In connection with the revitalisation of the Slovak railways the SF demanded that in the shortest possible time a legislative framework be adopted for all the businesses operating in railway transport, along with a definition of how their activities will be monitored. Most importantly, checks to observe the technical criteria of railway cars and the organisation of the working hours of employees are in question, the federation's webpage said.

The revitalisation plan was designed in part to stem the massive losses made by the railway companies over recent years. The programme foresees the redundancy within three years of 5,000 out of the 31,000 workers currently employed, according to a Transport Ministry media release. The ministry is also set to pick a strategic partner for rail freight operator ZSSK Cargo, with an international tender to purchase 66 percent of the company due by June 2012.

The union federation objects to the planned sale of the two-thirds share of Cargo, to occur once the financial condition of the firm has improved. They argue that the state should preserve Cargo as a national and strategic railway carrier after its finances have stabilised.

ZSSK Cargo was created in January 2005, when the state broke ŽSSK into two joint-stock companies: ZSSK for passenger transport and ZSSK Cargo for cargo transportation. The reason for the move was that the cargo business, which at that time was profitable, was being used to fund the company’s passenger transport services, a cross-subsidy that European Union rules do not allow.