NUMEROUS illusions have been created about highway construction in Slovakia. So says Ján Figeľ, who now manages an extensive ministerial portfolio including, among other things, transport, construction and regional development. However, Figeľ says that he has now put on the table a feasible highway plan that does not mislead people into thinking that from limited public resources it is possible to build everything in a very short time. The Slovak Spectator spoke to the Minister of Transport, Construction and Regional Development about the country’s highway plans, his approach to the troubled state-owned railway companies, the challenges that the capital’s airport faces, and about the pitfalls of public procurement. 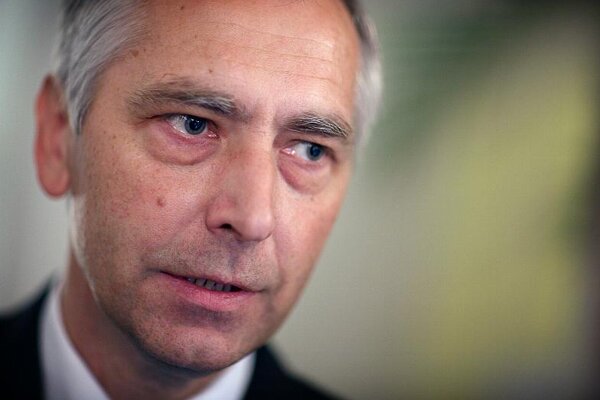 NUMEROUS illusions have been created about highway construction in Slovakia. So says Ján Figeľ, who now manages an extensive ministerial portfolio including, among other things, transport, construction and regional development. However, Figeľ says that he has now put on the table a feasible highway plan that does not mislead people into thinking that from limited public resources it is possible to build everything in a very short time. The Slovak Spectator spoke to the Minister of Transport, Construction and Regional Development about the country’s highway plans, his approach to the troubled state-owned railway companies, the challenges that the capital’s airport faces, and about the pitfalls of public procurement.

The Slovak Spectator (TSS): The Ministry of Transport, Construction and Regional Development has introduced the Programme for the Construction of Highways and Dual Carriageways for 2011 to 2014, which sets out some fundamentals for the upcoming years. What are these fundamentals? Will this government be able to deliver a cross-country highway for the nation during its term?

The cross-country highway between Bratislava and Košice should have been completed back in 2010, if we were to believe the promises given by the previous government. There have been numerous illusions created around highway construction but for this very reason we had to reassess some of these approaches after I took over as minister. This was because the previous government based the strategic plans on public-private partnerships (PPP), which should not be the dominant but rather a supplementary form of funding. Backing out from this model, which was overpriced and in some of its provisions even unconstitutional, I have to say required some courage. Yet, I consider our four-year programme realistic.

In more specific terms, the plan includes a connection between Žilina and Prešov, which are [D1] sections of the first and third packages that, originally, a concessionaire had been expected to build and operate for 30 years at a lavish price. In June, the construction of the first of these sections, near Levoča westwards, will be launched. When compared to the overpriced PPP package, our negotiated price is one third lower than the price recommended in an opinion by a state expert and the nominal value set out in the call for tenders by the state.

The largest package has been held up by one section, between Hubová and Ivachnová, due to environmental concerns; we still do not have the consent of the European Union, which is why it was very important to reopen this package.

The programme assumes the construction of sections of the D1, as well as the D3 highway in Kysuce and the launch of construction of the D4, which will bypass the capital. It also concerns dual carriageways, which are a little cheaper but at the same time very necessary for the overall road network: the finalisation of the R1, which will link Trnava and Banská Bystrica, will make it the longest uninterrupted section of dual carriageway. We will also launch construction of the R2, linking Trenčín and Košice, and sections of the R3 in Orava are also planned. The R4, which will connect Svidník and Košice with Poland and Hungary (in the direction of Miskolc, in Hungary), is also on our list, including some additional sections, for example the R5 and R6 heading to the border with the Czech Republic.

What I consider fundamentally new is that we plan to extensively invest in the restoration of first-category roads, which have been neglected over the past 20 years. These roads make up 49-50 percent of the transportation network in Slovakia but have been very poorly taken care of. We are planning the reconstruction of almost 700 kilometres of first-category roads altogether.

TSS: In terms of duration, does your government aim to wrap all this up by 2014? Is this also the timeframe for delivering a cross-country highway link?

Yes, this should be covered during four years, while some sections will take more time. I am referring to the tunnel in Višňové near Strečno, which is the most difficult section, but also a key to the connection between Žilina and Prešov, and is of symbolic importance. We want to launch construction at the beginning of next year at the latest, and the time required for construction is estimated to be 5 years. Thus a complete connection, with tunnels, between east and west can be expected by 2016 [turn of 2017], but most of the sections will be finished by 2014.

Numerous sections have been included in the programme up to the eastern border, while the volume of finances stands at €5 billion, and most of this should be launched within this term but will also continue in the years after 2014. The basic source is the European Union budgetary framework for 2007 to 2013, in which, for example, we had included for highway construction, again due to the incorrect approach of the previous government, some not-very-well-prepared projects; thus, the drawing of funds had been very weak. Currently we are in the fifth year of the 7-year budget for drawing funding from the EU Operational Programme for Transportation, which is now roughly 20-percent drawn. Thus we have the core of the work ahead of us with much less time remaining, but I consider this a key responsibility: to be able to use the EU funding in times of crisis and in a country which has extensive environmental and infrastructure deficits.

From the 2007-2013 budgetary period, we still have €700 million for highway construction, but within this amount are also included resources for railways and first-category roads, while the total amount of money allocated for transportation stands at €3.2 billion. Intensive negotiations on the 2014-2020 budget are expected next year and we are already counting on assistance for financing longer sections, the so-called line construction, so that we do not cover only shorter stretches but can plunge into construction and strategies that last longer than 3-4 years. After all, the construction of a tunnel lasts longer than one term of a government, thus it is logical to link periods together.

Another important form of financing is the European Investment Bank (EIB), the largest bank on the continent, in which Slovakia is a shareholder: our country has an active loan open for large projects of up to €1.3 billion. Some construction we would cover from this loan and then subsequently have re-financed from EU funds.

The electronic highway toll system serves as another source of financing, and its launch was planned in such a way that highway users contribute to the maintenance and operation but also the construction of roads. We are now modifying the system so that it is not loss-making but, on the contrary, generates profits.

Highway bonds will be another source, and the revision to the law on the pension saving system already assumes this option, within which the so-called pension fund management companies, or DSS, will be given the opportunity to invest in highways through state bonds.

Last but not least, there are the PPP projects, and we have already started discussing this form of financing in the case of the D4 bypass of Bratislava, which, also thanks to the highway toll, could have been differently tuned, with more balance in terms of the distribution of risks between the concessionaire and the state.