WHEN discussing government responsibility, it is impossible not to mention transparent procurement processes which use public resources wisely and encourage environment-friendly products and technologies. But another important government responsibility is making sure businesses and public offices obey the law and also keep to the principles that are promised in their official documents and reports. Governments in some countries have dozens of years of experience in this latter responsibility and in some cases have crystallised the concepts into legislation or into accepted best practices. 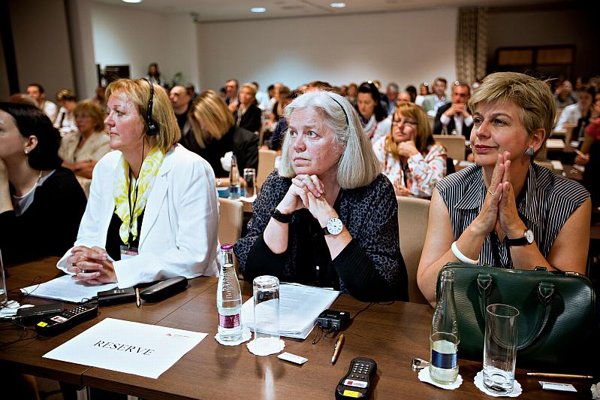 WHEN discussing government responsibility, it is impossible not to mention transparent procurement processes which use public resources wisely and encourage environment-friendly products and technologies. But another important government responsibility is making sure businesses and public offices obey the law and also keep to the principles that are promised in their official documents and reports. Governments in some countries have dozens of years of experience in this latter responsibility and in some cases have crystallised the concepts into legislation or into accepted best practices.

How governments should support corporate social responsibility (CSR) was the topic of a panel discussion held at the 8th international conference on corporate responsibility organised by the Pontis Foundation and the Business Leaders Forum in Bratislava on May 12.

The discussion featured a distinguished panel consisting of Trine Skymoen, Ambassador of Norway, Daphne Bergsma, Ambassador of the Netherlands, Anita Hugau, Ambassador of Denmark and Andrew Pittam, Deputy Head of Mission of the UK to Slovakia. Each presented the policies and initiatives through which their governments are supporting corporate social responsibility. Slovakia, represented by Economy Minister Juraj Miškov, had an opportunity to seek inspiration and encouragement, as the traditions of CSR in Norway, Denmark, the Netherlands and the United Kingdom are much older and better established.

“Slovakia supports all the processes which have a positive impact on economic growth,” Minister Miškov said in his opening speech to the conference. “This is also declared in the National Programme of Reforms adopted by the Slovak cabinet on April 20. Our programme supports the goals of the Lisbon strategy and the Europe 2020 strategy whose aim is to secure economic growth in a sustainable way during the post-crisis period, as well as create new jobs.”

At the conference Miškov introduced an example of concrete support for corporate social responsibility in Slovakia.

“In cooperation with the regional office of the UN Development Programme in Bratislava, the University of Economics in Bratislava, and other partners a project to support corporate social responsibility in Slovakia was launched which will result also in the draft of a National Strategy of Support for Corporate Social Responsibility,” said Miškov, adding that apart from the draft it will also provide monitoring and evaluation of corporate social responsibility in Slovakia.

Miškov stated that support to CSR is not an isolated issue of just one ministry but an issue for the whole government and he sees in it a parallel with development of the business environment and its improvement.

Miškov stated that as Slovak society and the Slovak economy develop, corporate social responsibility will improve as well, adding that he is convinced that in five years Slovakia will have companies that are much more socially responsible.

Even though Norway, the Netherlands, Denmark and the UK all have well-established programmes to support CSR, their individual strategies and programme names are somewhat different. Norway has, among other initiatives, its White Paper on CSR; the Netherlands has what it calls its Green Deal; Denmark has the Action Plan; and the UK has a minister for CSR as well as a CSR Academy.

“Why is CSR such a high priority for the Norwegian government?” asked Skymoen rhetorically. “Because CSR makes sense politically and morally and because it is good for business. In a modern global economy, CSR gives companies a competitive advantage and we want our companies to have that advantage.”

Norway’s White Paper published in 2009 states the government’s clear commitment to promote and implement CSR and defines three key areas for government action: implementing CSR in the government’s own initiatives; transferring society’s expectations to Norwegian companies and helping them through advice and guidance; and developing and influencing the CSR framework internationally as well as nationally.

“The government’s approach is to strengthen guidance and advisory measures towards companies,” said Skymoen, adding that since corporations operate in an arena of international trade, their responsibility should also be monitored on a multinational level. “That is why the Norwegian government has based its strategy on the OECD guidelines for multinational enterprises. The countrywide discussion on roles and responsibilities of corporations in our society resulted two years ago in the White Paper that arms the Norwegian government, as one of the first in the world, with a comprehensive CSR policy. This policy directly stimulates and influences companies’ CSR strategies and integrates them into the core of their businesses.”

“Before picking a potential supplier, the government office watches closely how these guidelines are met in practice,” said Skymoen. “They follow the Action Plan for Environmental and Social Responsibility in Public Procurement, drafted precisely for this purpose. State companies and companies with state investments must also make their ethical guidelines publicly known.”

Skymoen also presented the way that assets are managed in Norway’s Government Pension Fund Global as an example of how the government encourages CSR.

“Our experience is that when all stakeholders – governments, business, employees and NGOs – work together, we succeed in pushing the CSR agenda forward,” Skymoen said.

Ambassador Bergsma of the Netherlands used as an example two kinds of environmental impact reports that her government launched in 1999.

“So, it is the responsibility of the company that wants to start this kind of activity to do the analysis, to summarise what can be the negative environmental results and they must also indicate what could be more environmentally-friendly alternatives,” Bergsma stated. “And in this sense the whole public is a participant in this discussion and based on all the information the government will or will not give this particular company permission to start at all.”

Once a company is active it is obliged to submit a report each year on the environmental effects of its business, Bergsma added. This requirement is obligatory for all large companies and the government monitors whether the company has really stuck to all the rules and regulations.

Bergsma also discussed a new Dutch initiative which started earlier this year called a ‘Green Deal’ which can be struck between the government on one hand and either citizens or companies on the other hand.

“This Green Deal is very down to earth and about very pragmatic solutions,” said Bergsma, adding that its goal is better use of existing knowledge about smart and sustainable use of energy.

Bergsma pointed out that 85 percent of the citizens of the Netherlands believe it is important that companies follow CSR principles.

“About half of these people are even willing to pay more for products that are produced by such companies,” said Bergsma. “So it is really a growth market and in that sense I would say from the economic point of view CSR is really an opportunity.”

Anita Hugau of Denmark provided interesting examples of joint work undertaken by the government and the corporate sector in developing the country’s action plan for corporate social responsibility adopted in May 2008, as well as a programme known as the Climate Compass which helps companies to develop strategies for preventing climate change.

Hugau stressed that since the action plan was produced in cooperation with Danish industries, it enjoys a broad consensus. It encourages Danish businesses to undertake social responsibility, for example, by including climate-change issues in their individual CSR strategies.

The Climate Compass was developed by a partnership involving the Confederation of Danish Industries and the Danish Ministry of Economy and Business Affairs.

“It is a web-based tool that targets businesses in all sectors looking to reduce their CO2 emissions,” said Hugau, adding that now companies can go on the internet to get necessary information. “Online, businesses can prepare a climate strategy and get advice on how to reduce CO2 emissions.”

The Climate Compass also provides examples of beneficial measures and offers tools for communicating and reporting these measures. Companies can also share experiences and learn how other businesses are including climate issues in their CSR strategies, Hugau said, adding that this is just one of several tools that the government has developed in close cooperation with the corporate sector.

The United Kingdom is one of only a few countries that have a minister for corporate responsibility. Andrew Pittam explained that the post was established about 10 years ago.

The umbrella agency in the UK responsible for CSR is the Department for Business, Innovation and Skills (BIS), which is similar to the Slovak Ministry of Economy.

Pittam explained that BIS develops policy and sets the framework for the rest of the government. Other government departments have responsibility for CSR in their own areas.

CSR is not imposed from on high by the UK government, Pittam said, and the concept is already a reality for many large and small businesses which work through organisations like Business in the Community (BITC).

Pittam provided information about one of the most recent initiatives undertaken by the UK government in collaboration with BITC called ‘Every Business Commits’. Its purpose is to help businesses understand how they can act responsibly by giving them clear examples of how they can make a difference in five priority areas: supporting communities; improving quality of life; improving skills and creating jobs; protecting the environment; and supporting SMEs.

“This is a kind of a contract between the government and a business,” said Pittam, adding that under this contract the government will reduce regulation and obstacles to businesses and simplify taxes and then expects these businesses to think about what actions they can take to contribute to the wider societies in which they exist.”

According to Pittam, ‘Every Business Commits’ aims to shape businesses’ contribution to the government’s broader agenda to empower communities, encourage social action and responsibility and decentralise public services, known in the UK as ‘The Big Society’.

The United Kingdom also has a CSR Academy that was established by the government in 2007 and later transferred to the responsibilities of BITC.

“The CSR Academy was set up with two simple aims – firstly, to provide advice for companies on any CSR issues and secondly to provide training to businesses seeking to develop their CSR potential,” Pittam stated.