Singapore as a business role model

SINGAPORE is the new business role model for Slovakia: the government now says it is fired up with the ambition to cut red tape and create an environment where businesses spend their time doing business rather than satisfying the whims of bureaucrats. 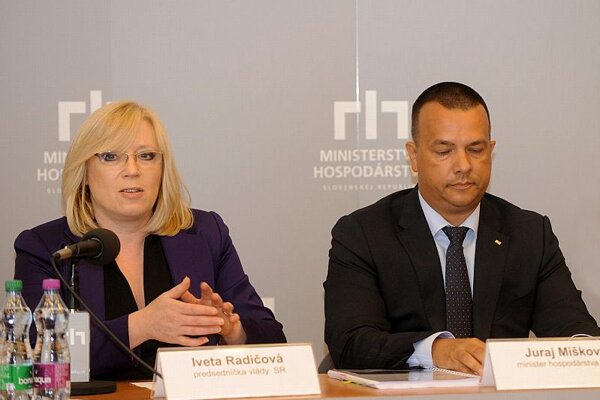 SINGAPORE is the new business role model for Slovakia: the government now says it is fired up with the ambition to cut red tape and create an environment where businesses spend their time doing business rather than satisfying the whims of bureaucrats.

Prime Minister Iveta Radičová and Economy Minister Juraj Miškov have set out 100 measures that in five years should, they say, result in a 25-percent drop in Slovakia’s administrative burden, which is currently estimated to be around €2 billion per year, or about 3 percent of the country’s GDP.

“It is not accidental that the project is called Singapore,” Radičová said as she introduced the Singapore Project, which aspires to vault Slovakia into the group of 15 countries with the best business environments in the world.

Radičová also said that completing the 100 measures within the red-tape cutting scheme is one of her personal political priorities. The package includes, for example, a simpler process for setting up a firm, simpler construction procedures, better enforcement of claims, as well as simpler administration of taxes and payroll taxes.

Businesses have welcomed the initiative, suggesting that if the government removes such barriers then they will take care of the other challenges, such as creating new jobs. However, they also warn that corruption, instability in legislation, and lack of transparency in public procurement also need to be dealt with.

The trade unions have warned that making conditions easier for businesses in Slovakia will not solve what they call the fundamental problems of the economy: the low liquidity of firms and the weak enforceability of the law.

Among other goals, the government wants to shorten the time it takes to set up a company to two or three days, and to reduce the cost to €1. The objectives of the Singapore Project will be mid-term goals to be achieved by the second half of 2013 at the latest and short-term goals to be met this year, according to an official release from the ministry.

The government claims that the project, which according to Miškov should turn Slovakia into the best business environment in central Europe, might save businesses a total of €100 million a year.

The ministry would also shorten the time for issuing a self-employment certificate – the so-called živnosť – and start using the electronic records of public registers for legal purposes.

Referring to a policy of the previous government, Miškov said, as quoted by the SITA newswire: “The concept of a strong social state has failed. The priority of the government and the Economy Ministry under my leadership is to improve the business environment and become a fully competitive, attractive and full-value trade partner for investors.”

According to the Institute of Economic Analysis at the Ministry of Economy, the total administrative burden on businesses in Slovakia stands at €1.98 billion per year. The institute has identified 180 duties to submit information which the state imposes on businesses and which lead to cumulative costs to businesses of €1.25 billion annually, SITA wrote.

“Every change that will make the life of businesses easier and that frees them from redundant red tape is useful for the economy and thus I welcome this initiative,” the executive director of the Business Alliance of Slovakia (PAS), Robert Kičina, told The Slovak Spectator.

If the government manages to fulfil half of the planned measures, that would already represent visible progress, Kičina said, adding that since the ministry claimed that it would discuss their implementation with other departments, there is a pretty decent chance that the measures will then be introduced in practice.

“However, one should not forget that along with bureaucracy, on which the material prepared by the ministry focuses, we also have other serious barriers such as the low enforceability of the law, corruption, lack of stability in legislation, lack of transparency in public procurement and a complicated payroll-tax system,” Kičina said.

Ján Oravec of the Association of Businesses of Slovakia pointed out that in various international ratings of national business environments Slovakia is mostly ranked in the thirties or forties. It has achieved similar rankings in assessments of quality of life in the UN Human Development Index, he added.

“If we want to increase our quality of life and living standards, significant improvement of the business environment is unavoidable,” Oravec told The Slovak Spectator.

Nevertheless, a much larger problem than removing barriers from setting up a business or doing it in one day – or for €1 – is currently the financial burden that falls on existing companies, for example in the form of the payroll-tax burden or fees in terms of administration, according to Oravec. He said that the changes to payroll taxes that are currently being prepared should ease this burden.

“I personally think that in Slovakia the problem isn’t with establishing a firm but with sustaining it,” Viola Kromerová of Slovenský Živnostenský Zväz (SŽZ), an association representing self-employed people, told The Slovak Spectator.

Kromerová said a major problem is what she called frequent changes to the rules and a system based on sanctions and the assumption that businesses will not behave correctly.

Oravec welcomed the new measures as well, but said their high number makes him doubt whether they will all be achievable. As to whether it is enough to remove barriers in order to improve the business environment, Kičina has said that focusing on erasing the barriers should be enough.

“If the government creates excellent conditions for business, then businesses will take care of the rest: reducing unemployment, increasing the living standards of the population and the overall growth of the economy,” Kičina said.

Oravec said that on the one hand complete removal of barriers does not automatically bring prosperity, but on the other hand economic performance cannot be improved without the removal of such barriers, which he said have been swallowing cash for non-productive goals.

“To [the goal of] reducing barriers, the government must add more effective services which it provides to the private sector and which are paid for by public taxes, [by improving the] efficiency of the public sector, mainly the judiciary, education and health care.

The government has the goal to reduce bureaucracy by 25 percent in three years. Some observers say they wish the government were more ambitious, while others remain sceptical about such ambitious goals.

“This goal only copies the EU-wide intention to reduce bureaucracy and after the experience with the infamous Lisbon Strategy I am rather sceptical towards ambitious goals which the European Commission sets,” said Kičina. “Despite this, I think it is not important whether it is 25 percent or only 20 percent. What is important is that the problem is finally being addressed.”

Quantification of the goals still has to be clarified, said Oravec. If the government claims that the administrative burden stands at €2 billion and it intends to reduce this burden by €100 million annually, then a 25-percent reduction can be achieved only in five years, which Oravec views as insufficiently ambitious “especially given the fact that other countries have not slumbered and have achieved a significant lead over Slovakia”.

Kromerová said that SŽZ would expect developmental stimuli and said sectors that are of key significance should be defined.

“It is crucial to address the employment of young people and finally reform their preparation for employment, and we have to create new jobs,” said Kromerová. “We are continualy increasing the retirement age but no one wants to employ citizens after they have reached their forties.”