THE 150th anniversary of the national unification of Italy is not only a huge commemorative event for this Mediterranean country but for Slovakia as well. This is because rather than enjoying only one festival of Italian culture this June, Slovaks can enjoy a second one as well. 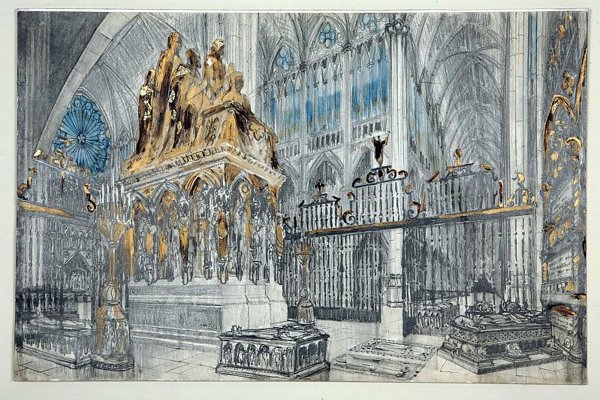 A stage design by Luchino Visconti for the opera Don Carlo, exhibited at the Homage to Verdi. (Source: Courtesy of ICI)
Font size:A-|A+0

THE 150th anniversary of the national unification of Italy is not only a huge commemorative event for this Mediterranean country but for Slovakia as well. This is because rather than enjoying only one festival of Italian culture this June, Slovaks can enjoy a second one as well.

In addition to the traditional Italian-Slovak Chamber of Commerce’s Dolce Vitaj festival, the Italian Cultural Institute has organised a festival for 2011 called Italian Cultural June. Both festivals are bringing many facets of the broad Italian culture to Slovaks in the capital and in many towns beyond.

The Italian Cultural Institute started its marathon of events by marking the 150th anniversary in April in grand style when Italian President Giorgio Napolitano unveiled a masterpiece by one of the greatest painters of the Italian Renaissance, Paolo Veronese, at the Bratislava City Gallery. And while many of the cultural institute’s events are scheduled for June, some of the festivities will continue during the following months.

When introducing the programme of activities making up Italian Cultural June, Teresa Triscari, the director of the Italian Cultural Institute, spoke about the depth of relations between Italy and Slovakia.

“The Italian Cultural Institute in Bratislava is one of the first cultural institutes that Italy launched abroad,” said Triscari, adding that it might even have been the first one as it was established as early as 1922, while its sister institute in Prague was established only in 1925 and the Warsaw institute was not started before 1927. The Italian Cultural Institute in Vienna might be launched even later but there are some uncertainties about its actual date of founding.


“Unfortunately, the institute in Bratislava closed down in 1949 and reopened only in 1999, after 50 years of emptiness and silence,” Triscari lamented.

Italian Cultural June offers exhibitions, concerts, film screenings, and theatre performances and is not confined only to Bratislava. On June 12, an exhibition of works by Laura Pitscheider, an Italian painter, poet and journalist, entitled Icons of Being will open in Poprad and some of the most well-known comedies by Italian director Mario Monicelli will be screened at the 19th year of the Artfilm festival in Trenčianske Teplice during the second half of June. The institute, in cooperation with the Museum of Emigration, also has prepared screenings of films about Italian emigration to help satiate lovers of Italian cinematography.

Those who want to hear more about the Italian Renaissance should plan to attend a lecture by Alessandro Cecchi, the director of the Palatina Gallery in Florence, and curator Anna Bisceglia on June 30 when the exhibition of Paolo Veronese’s Portrait of a Man closes at the Bratislava City Gallery. And on July 7, Paolo Portoghesi, an Italian architect and representative of Italian postmodernism, will speak at a conference about suspended gardens.

Veronese will be not the only Italian Renaissance painter presented in Bratislava: in October the Bratislava City Gallery will display works by Jacobo Bassano. The Week of Italian Language comes also in October, followed by an additional celebration of Italian culture in November with the Mittel Cinema Fest.

The fourth year of the Dolce Vitaj festival will mark the 150th anniversary of the unification of Italy as well and will primarily offer a composite of the modern history of the country and the contemporary culture of those living on the Apennine Peninsula. Dolce Vitaj 2011 was officially launched with the opening of the Piemonte Industria exhibition in Košice on June 3, featuring 100 years of industrial photography.

The exhibit will then visit Bratislava’s Design Factory during the second half of June. Its photos document the important impact of industrialisation on the life and thinking of the nation, states the festival’s news release.

A project called Return to Contemporary Italy offers on June 22, again in the Design Factory, a look ‘behind the scenes’ of modern Italy via cinematography, cartoons, design and advertisement from the archives of the Micheletti Foundation. It will be accompanied by a lecture by philosopher René Capovin.

The birth of a modern lifestyle in Slovakia (1918 – 1949) will be presented through a photo exhibition called New Slovakia that will open in the Slovak National Gallery on June 30.

But after four years in which the festival presented the cultures of Italy and Slovakia individually, its 2011 edition gives space to projects in which both cultures intersect and interact. One such event is the second year of the Víno Vitaj wine festival in Bratislava’s old city, when Slovak bands will play on June 29 in four selected restaurants that will offer Italian wines at symbolic prices.

For the first time in its history the 2011 festival will hold an event in the town of Šamorín, to the east of Bratislava, at an industrial park that is regarded as a symbol of industrial cooperation between the two countries.

“The Italian Industry in Slovakia exhibition [in Šamorín] wants to open the door for visitors into the world of manufacturing companies via Italian products made in Slovakia,” the festival’s press release states. This exhibition will last from June 22 until July 22.

The Dolce Vitaj Festival will also play a role in Slovakia’s first Day of Sport without Barriers on June 22, an event that was established by Slovenské Elektrárne thanks to inspiration from its parent, the Italian company Enel. An exhibition of 15 works by the winners of five competitions among young visual artists, supported by the VÚB Foundation, will also be open in Košice between June 23 and August 28.

“The aim of the Dolce Vitaj festival is not only to become a regular cultural event in Slovakia and to bring Italian culture and lifestyle closer to Slovaks but also to open dialogue between the two cultures and support cooperation in the mid-term and long-term view,” Roman Ševec from the Italian-Slovak Chamber of Commerce wrote in the festival’s news release.

Websites of the festivals: