Radičová and coalition mark one year in office

JUNE 12 marked one year since the 2010 parliamentary elections that sent the Smer party into opposition and brought a new government composed of four centre-right parties to power, led by Slovakia’s first-ever woman prime minister, Iveta Radičová. 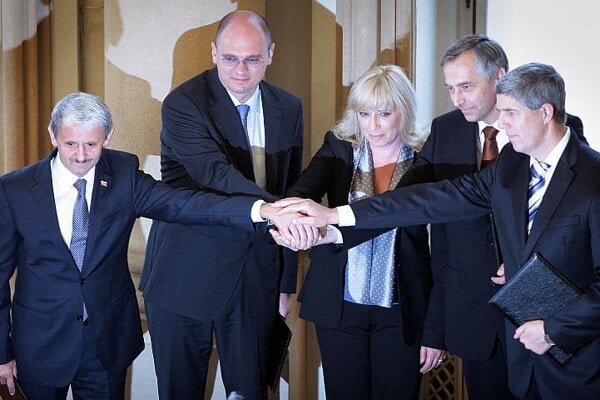 Leaders of the governing coalition one year ago. (Source: SME)
Font size:A-|A+0

JUNE 12 marked one year since the 2010 parliamentary elections that sent the Smer party into opposition and brought a new government composed of four centre-right parties to power, led by Slovakia’s first-ever woman prime minister, Iveta Radičová.

“We took over Slovakia in a most difficult situation, when each [government] sector was marked with huge indebtedness and bad management,” Radičová said on June 10. She added that her first year in office had been a difficult one, affected by the continuing impacts of the economic crisis, massive floods across large parts of Slovakia last summer and rising prices for global commodities that brought higher consumer prices in Slovak stores and petrol stations.

Many citizens had very high expectations for the incoming government: reinvigorating the national economy, making radical improvements in the judicial system, bringing more transparency to government, fighting various forms of endemic corruption, and finding some new approaches to remedy problems in Roma communities and overcoming what had become a tense relationship between Hungary and Slovakia.

Robert Fico of the opposition Smer party called Radičová’s evaluation “rubber statements” used “to cover up the disastrous results of the one-year rule of the rightist cabinet”.

“People in Slovakia are in fact getting poorer because the rise in salaries is lower than the rise in prices,” Fico said, adding that this was not the case when he was prime minister between 2006 and 2010.

Then they have a mayor who was saying that they’ve been working with the Roma for 20 years and that they are very committed. They were telling us stories about housing. But housing is also implemented very incorrectly. For instance, they built several houses there with one room, but if you check how much they spent on that house per one square metre, it’s much more expensive than the market price. They could have built houses downtown with that amount of money. And on top of it, the ghetto is in an industrial zone and that means landownership issues are not resolved. And that means that in one year these buildings could be demolished. So this means a lot of money was spent for nothing. The system has to be aware of these problems and deal with them. But when you raise the issue of segregation there is a self-defence mechanism and people start saying ‘No, according to the policy they are all equal’; but if you go to the field you’ll see that it’s not like that.

TSS: The Slovak government now admits there is segregation?

Yes. With the previous government we were trying to cooperate as much as possible but it was very difficult. Now at least the government admits that there is segregation and that it’s an issue to be dealt with. They also agreed that it’s not only about the pre-school programmes but also about the transition between elementary and secondary education – the drop-out rate at that time is really high.

It requires a comprehensive approach. You cannot deal only with education if employment and housing problems are not dealt with. If Roma are settled on the outskirts of the city many of them have problems with transport, for instance.

TSS: During the workshop you had a strong exchange of opinions about having a ‘zero grade’ for children from socially-disadvantaged communities. Can you share your views about this?

The zero grade class was actually a temporary solution that was applied within the PHARE programme as a transitional solution for disadvantaged children. As an idea it’s good. But if you visit the existing zero grades you will see that most of them are segregated. Again, Roma children are in a majority there because they are socially disadvantaged. But if you actually check how many of those children who are attending zero grades are later enrolled in mainstream education and how many of them are enrolled in special schools, the percentage is about 40 percent or even more. So I think this is not a solution. Maybe as a transitional solution it worked, but not as a permanent solution because again something is wrong if you still have more than 40 percent of children enrolled in special education.