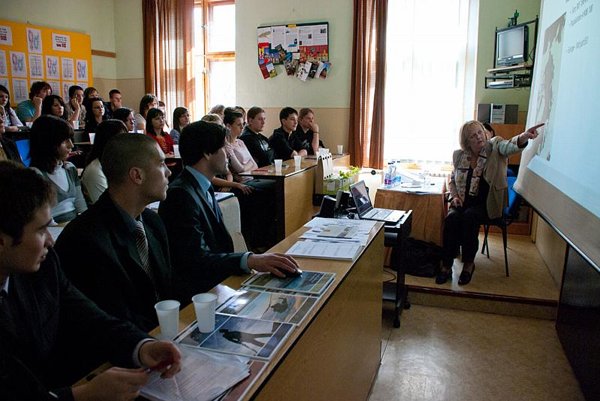 “A country does not fall apart when 50 percent of its leaders are women,” Skymoen said adding that in her homeland publicly listed companies are required to have at least 40 percent women on the boards of directors, 40 percent of deputies in parliament are women and out of the seven political parties in the Norwegian parliament, five are led by women.

"There are areas of life where society needs a push to change traditional patterns, even if those patterns do not benefit either gender," said Skymoen who met the students as part of the Bringing the World to the Classroom project developed by The Slovak Spectator, several foreign embassies in Slovakia and Sugarbooks, a distributor of textbooks.

Students of the Business Academy, who also operate a human rights club at the school, had done their homework as well, including conducting interviews with various people in Levice to ask their opinions about the position of women in Slovak society.

Gender equality, as Skymoen explained, is an essential part of the Scandinavian model and is at the very heart of society there. Eighty percent of Norwegian women participate in the labour force, one of the highest rates in the world.

“But it’s not just for the sake of women being given the opportunity to work,” said Skymoen. “It is important also for economic growth. When you have more people working, you take in more taxes and governments can provide more services, including day-care facilities for kids, which enable more women to work.”

One of the students asked why it happens that sometimes when males and females work in similar positions that the females earn less than the males.

Skymoen answered that one way to explain the wage gap is that women traditionally work in sectors where there is lower pay: teachers and social workers are not paid as well as some jobs in industry. But then she noted that surveys show that there are often differences in remuneration when women and men do exactly the same jobs, adding that this is something that should not happen in democratic societies.

In an essay written before the meeting, Lukáš Hornáček, one of the students, wondered why people are often surprised when they see a woman in a high political position such as the European Parliament. He wrote that it seemed strange to him that this is would be surprising, adding that he believes that this is an indication that there is still a gap between public declarations and real life.

The organisers of the event noted that perhaps one day many of these students would be decision-makers or running their own businesses and that they will then be able to make their own contributions to creating a truly gender-equal society.