THIS COLOURIZED postcard from 1916 shows Ferdinand’s spa located within the grounds of Bratislava's Železná studnička. 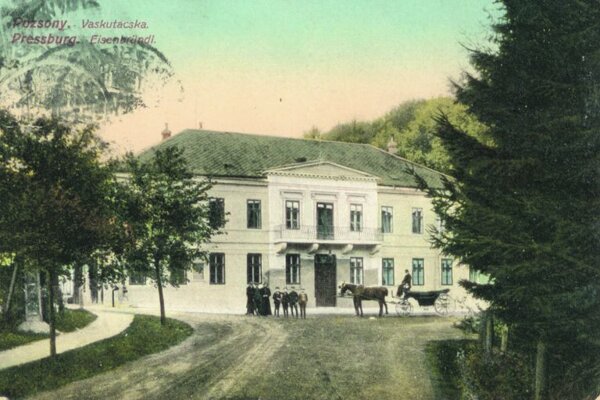 THIS COLOURIZED postcard from 1916 shows Ferdinand’s spa located within the grounds of Bratislava's Železná studnička.

The original spa building was constructed next to an alkaline ferrous spring whose chemical properties were first analysed in 1826. Soon after, Bratislava burgher Jozef Pergameny received permission to build a bathhouse near the spring. The diligent burgher was not idle for long and as early as 1830 Ferdinand’s spa marked its first successful social season. Interest in staying in this enjoyable environment was very strong and in 1844 the spa was rebuilt as a hotel.

In the following decades, the somewhat ostentatious building saw many visitors, as Železná studnička belonged among the most popular sites for meetings of the nobility of the Hungarian Kingdom as well as for daily visits by rich Bratislavans. Its popularity can be seen in the fact that a regular trolleybus line that led to the hotel was built between 1909 and 1915 .

Civilisation, however, marched on and the spring dried up because changes to the area’s brook as well as other construction in the area drained the groundwater. The dearth of new spring water soon influenced the fate of Ferdinand’s spa and hotel with its gradual decline beginning in the 1960s leading to it being demolished in 1970.